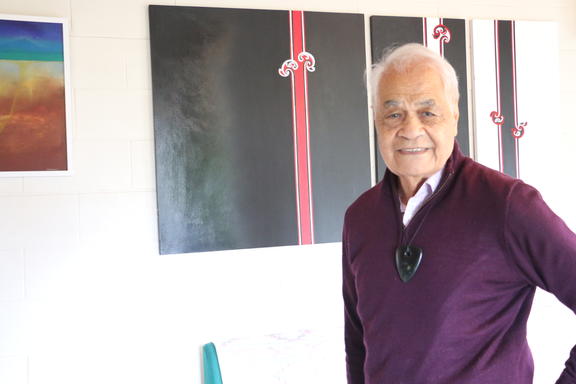 In part two of this interview, Dr Haare Williams recites some of his poetry, explains the theme of his artwork and reflects upon his time as a broadcaster.

Dr Haare Williams remembers fondly the interviews he did during the heyday of his broadcasting career.

There’s the time he asked poet Hone Tuwhare for a poem while walking to Waitangi.

“We arrived at Waiomio and I put a microphone into Hone Tuwhare's hand and said give me a poem Hone off the cuff!, he took the microphone and I can’t use this word on your programme, but he said why the **** are we walking to Waitangi in the uncomfortable jackboots of the Pākeha,  let’s take them off, walk barefooted with me e hoa, ae as whanau” he says.

This recollection is only one of many that Williams recalls during his time collecting interviews for the Te Reo Unit at the New Zealand Broadcasting Association (NZBC).

Just down the hallway in Williams Auckland house is a calligraphy artwork piece of Tuwhare’s poem ‘Rain’.  Haare's  house is filled with art, sketches of his children and grandchildren, and pieces that have featured in nine art exhibitions over the years.

The theme of his paintings focuses in on Māori stories, ancestry and connections to particular iwi. In November Haare released his book ‘Words of  Kaumatua’,  a book that features poetry written by Haare and edited by Witi Ihimaera it also tells the story of his upbringing in the small coastal town of Ohiwa Harbour raised by his Tuhoe grandparents in a raupo hut. He attended  Opotiki College and studied at Ardmore Teachers Training college, in time he left the classroom and went into broadcasting.

In the days of the NZBC Haare worked in Television for six months before he switched to radio.

“I couldn’t stand television …radio was much more tolerant,  I found I could do my own stories with a tape recorder and move around the country, my idea was to collect the tāonga of our people, Henare Te Ua was absolutely marvelous because of the archiving of stuff.” he says.

Haare says that people like Sydney Jackson, Titewhai Harawira and Hone Tuwhare the saw broadcasting as a medium towards political justice. 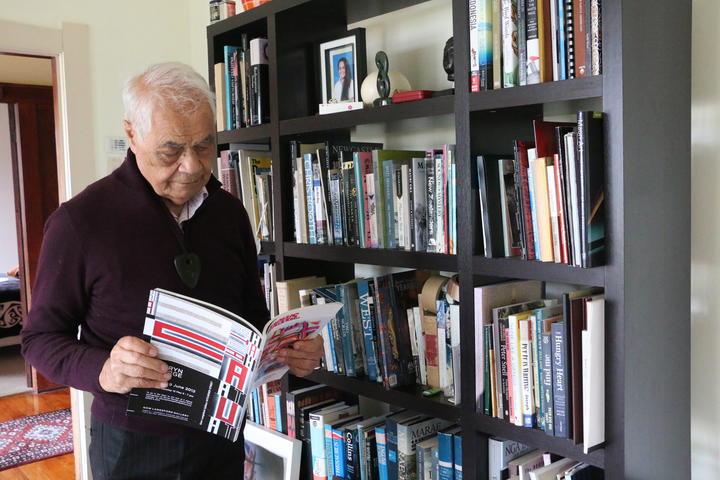 During his broadcasting career Haare committed to telling the stories of the Tuhoe prophets Te Kooti and Rua Kenana, and the Taranaki prophets Te Whiti o Rongomai and Tohu Kakahi.

One highlight was travelling down the Waikato River with Kaumatua (elder) Rua Cooper who told the stories of the Waikato Land Wars and its impact on its people.

“We started in Rangiriri on a barge and drifted down the Waikato River…the boat would drift ashore we’d stop there for a while and he told me where Tawhiao slept by the creek and washed his feet and did karakia.” he says. 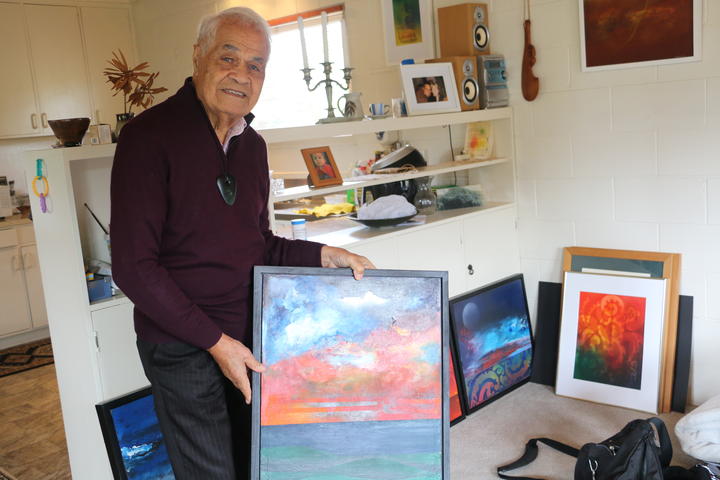 The two would spend two weekends on the Waikato River with Haare recording these stories, one weekend was particularly memorable.

“I had a mic strapped around his neck…he stood out in the rain, it was too cold for me…he said I’ll stand out here, he treated the knowledge he was given as the mana of the river and the mana of Waikato and he need to be batted by pellets of ice…when you listen to some of the tapes you can hear the pellets hitting the microphone…Rua Cooper and other elders opened the door so willingly.” he says.