At home with Dr Haare Williams 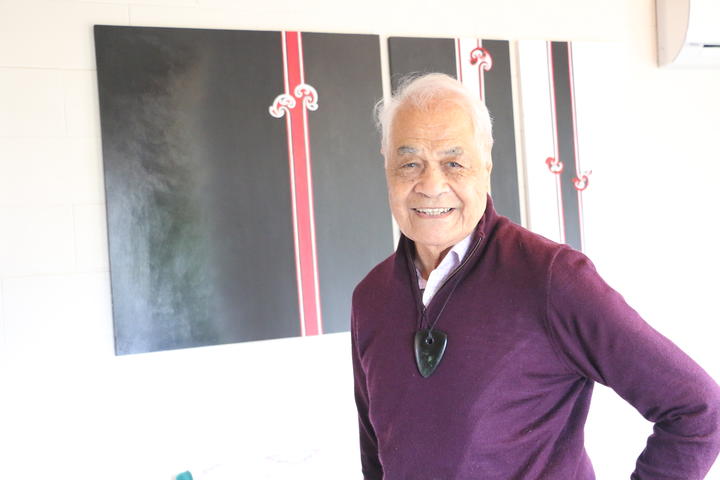 Dr Haare Williams at his Auckland home with one of his art pieces. Photo: RNZ/Justine Murray

Dr Haare Williams’s new book combines poetry and prose that centres on his life influenced by a humble upbringing in Ohiwa.

The book ‘Words of a Kaumatua’ was released November 14th edited by author Witi Ihimaera inspired by Williams love of language, an idyllic childhood and issues that stem from inequality in New Zealand.

Born in Te Karaka on the East Coast, Haare’s grandparents would place him under the guidance of his Tuhoe grandparents who were evicted from Te Urewera. In reflection, Williams says they turned their poverty and alienation into richness.

Settled in Karaka at Ohiwa Harbour in the Eastern Bay of Plenty, Williams was raised in the Māori language and learned the stories of the prophet Te Kooti of whom he says is the most revered and reviled person in the country’s history. Christianity played an integral role that influenced his love of language.

“The bible gave me the quality and the resonance of language, a love of language,  the whaikōrero on the marae, the karanga,  the waiata, I was part of that, I felt I was imprinted with the wairua of all of language especially. “ he says

After leaving Opotiki College Williams enrolled at Admore Teachers Training College, but it meant leaving behind a simple life where he was nurtured among his elders.

“The morning my grandmother got up and lit a fire she preferred to cook outside around the stones…and she know I was leaving home and when I stood up I saw her crying…So I had to walk down the valley… I got through the gorse and Manuka and climbed the fence or barbed wire…and I stood there for a while I knew she’d be looking at me but I was too scared to look at her, that was the last time I saw her’… he says

Before he left Kutarere on the bus, a Pākeha man Frank Drury would bid Williams goodbye with a handshake and a half crown for the trip which Haare would return the money some years later.

He attended Ardmore Teachers Training College and experienced new things like a new room, a mattress and a desk. He took out a penny as part of his Ringatu faith recited a karakia.

“I said to the penny, I’ve arrived at the first part of my destination...so when I qualified as a teacher, I was appointed to Tauranga, to Maungatapu School’ he says

He stayed in Tauranga for ten years before heading into teaching positions in Taupo and Matauri Bay. He recalls the school newsletter, building wooden go-carts for the kids, and the support expressed by the late Sir James Henare and the late Sir Graham Latimer in his teaching role.

In time he would move from teaching to broadcasting take over from Bill Kerekere’s role in the Māori Unit of the New Zealand Broadcasting Corporation.

“The Māori voice on radio is the voice of equality, broadcasting you become politically active, when you re-tell the truth of the story of New Zealand. He says.