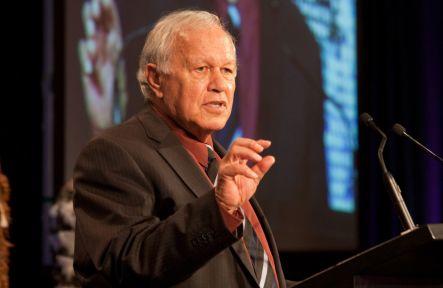 The Māori language school of excellence, Te Panekiretanga has produced many confident speakers of Te reo Māori, evident at the recent tangihanga of Te Wharehuia Milroy (1932 - 2019)

With the loss of this pillar in Te Ao Māori and perhaps not by coincidence the year-long intensive Māori language learning course is set to close in August.

On the eve of the nehu (burial) I attended the tangihanga. The contingent I travelled with arrived at around 8.30am, the paddock area beside the marae was packed with cars, Māori wardens were on hand to help with logistics, and the crowd included iwi dignitaries, students from wharekura, public servants and former students of Te Wharehuia Milroy.

As we walked onto the atea the sorrow and loss of this great man of the Māori world is felt deeply, like an invisible net cast over the crowd.

Pou Temara is the first speaker on the side of the Tangata Whenua, fitting not only because he shares the same Tuhoe links as his dearly departed mate, but because Pou has the words to encapsulate this sense of loss and grief, I’m sure a difficult thing to do in light of their close relationship, both men have been at the helm of teaching the reo Māori and tikanga Māori for some time now.

Inside the whare puni the whānau of Te Wharehuia sit around his tupāpaku, photos are displayed above the coffin.

Once the speaking rites cross to the manuhiri side, there is a sense of anticipation, this is a young paepae tapu (oratory bench).  The korero is exceptional and the contextual use of the language is the embodiment of the Te Panekiretanga.

Some speakers use the Marae atea as their stage and pace up and down to excise their energy through movement, there was a microphone in place, but it wasn’t needed, when emotion runs high it can amplify ones voice.

In this moment as each speaker stands to speak, there is the realisation to me and perhaps the people there, that the legacy of Milroy lives in these young men who had the honour of being taught by him.  The calibre of speakers is fitting of the occasion, backed by up with level of waiata apakura sung by the kuia, students and exponents of the language.

Milroy was an exemplar of Te Reo Māori, he was a trustee of Te Kōhanga Reo National Trust, a member of the New Zealand Geographic board and a member of the Waitangi Tribunal for a time.

He bestowed the name ‘Te Matatini’ to replace the Aotearoa Māori Performing Arts Festival and was appointed a Companion of the Queens Service Order (QSO) for his service to Te reo Māori in 2003. In 2004 the Māori Language School of excellence, Te Panekiretanga debuted and one year later in 2005 he received an honorary doctorate from the University of Waikato.

At his tangihanga he was described as a man of humility, and that he exuded the notion of whakaiti (to be humble) and of course that he loved golf.  Former student Mauria Ngatoko had Milroy as a teacher back in 1990, her classmates knew he loved golf, and on the odd occasion he’d leave a whiteboard filled with exercises to carry out in his absence.

“He reminded me a lot of my koroua a man of very few words but very wise, he was type of man that some might call it, played us in riddles, riddles as they were….it held us in good stead in terms of how he experienced te Ao Māori, he was such a knowledgeable person, he always had a smile on his face, even in times of sadness.” She says.

In 2009 Wharehuia Milroy accepted an award for this contribution to the Māori language in 2009, he did so with these final words of his acceptance speech;