Tamsin Hanly is on a mission to get schools to teach critical history and not what she describes as the ‘standard story’ more focussed around Cook's discovery. 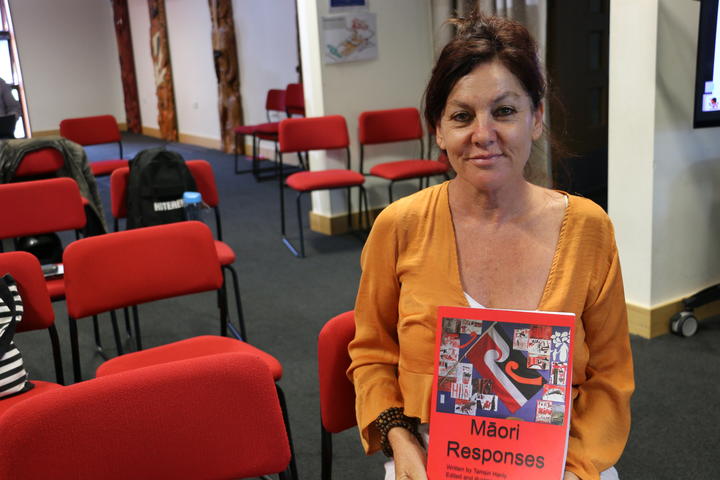 Tamsin created what she describes as a Critical Programme Resource (CPR) ideal for teachers, schools and migrants who know nothing about the country's colonial history. Photo: RNZ/Justine Murray

A teacher in mainstream education for 25 years, Hanly designed a learning resource for teachers, pupils or any person who has no knowledge of the country’s colonial past.  The Critical Programme Resource, (CPR) is made up of a series of six books that begins with Māori creation stories to the impact of legislation and the Māori and Pākeha responses to it.

Hanly took out a mortgage on her home to create the books and has received widespread support about the content and the style, but is adamant that it is written in a ‘books for dummies’ format as opposed to an academic style.

A self-described ‘Jaffa’ in reference to her Auckland upbringing, Tamsin says it wasn’t until she was 18 years old that she became aware of her lack of understanding of the country’s colonial past.

The inadequacies felt by Hanly was the reason she headed to Teachers Training College and decided to study for her Master’s Degree which looked at the classroom curriculum of New Zealand history.

“The findings were that most teachers only know what I call the New Zealand ‘standard story’ like the grand colonial narrative of New Zealand history where cook discovered the country and the English version of the treaty is the accurate treaty, Māori and Pākeha have the best race relations in the world, all those ideas from the standard story and its inaccurate,” she says.

At a symposium hosted by Te Whare Wānanga o Awanuiārangi, Hanly discusses her background as a Pākeha teacher and creator of the CPR book series.