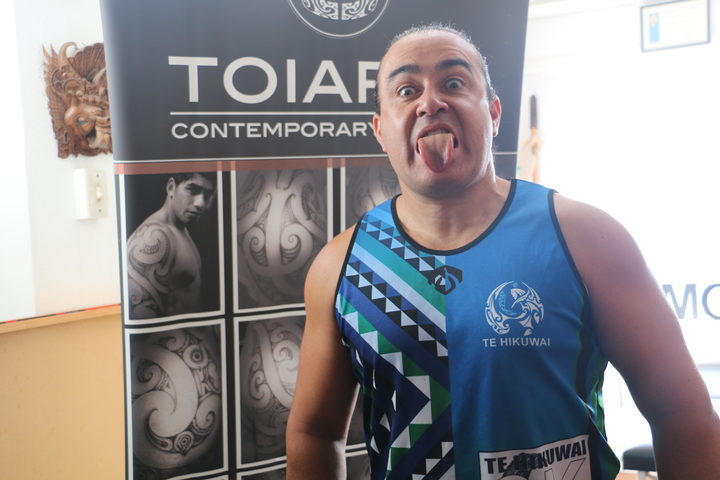 Richard Francis is a taa moko artist, graphic artist, teacher, painter and carver who graduated from the Māori visual arts and design school Toihoukura in 1995.

Shannon Mohi is at Richard's studio Toiariki, in downtown Rotorua, for a morning appointment.

He's set to receive puhoro – a moko (traditional tattoo) which will take up 40 hours to complete.

The work will be completed over four days, and the design will start from Shannon’s lower back, down his buttocks and legs.

It will depict his whakapapa and illustrate the historical narratives of his iwi and hapū of Awahou.

Richard will include designs of the torea (albatross) and the shark.

At the start of the session, Richard takes an hour to draw straight onto Shannon’s body, and will then start up his tattoo guns. 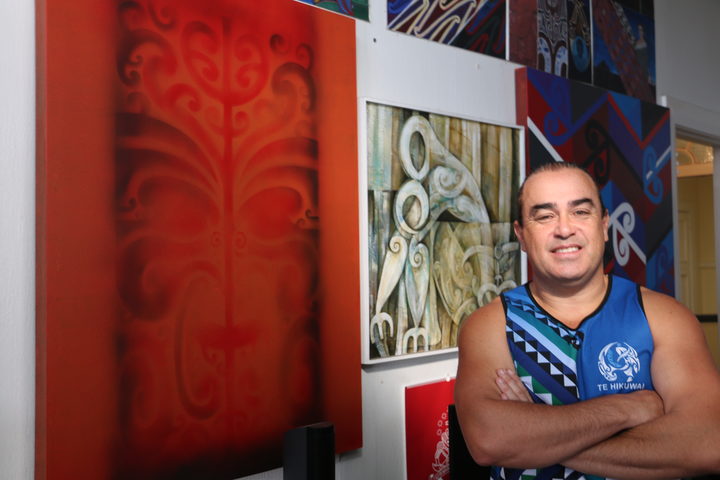 That same year Ivan Ehau died and his role would eventually be filled by visual artist Sandy Adsett.

By this time Richard had joined the arts programme Toihoukura at Tairawhiti Polytechnic following a recruitment drive from Derek of ex- students from Gisborne Boys High school.

“When we all left school we sort of floundered around… Derek came door-knocking so when we first went into the Māori arts course we saw all of the boys… the ones that he had come and scouted.”

Richard graduated from Toihoukura in 1995 and spent four years working under the mentorship of Derek.

“The old school apprenticeship, the clean-up, the set-up, the draw-up and the break-down. It was in 1996 at the exhibition Patua in Wellington at City Art Gallery. We had hung the exhibition [and] we were doing public demonstrations of moko in the public arena.”

Part of the Toihoukura programme was getting hands-on experience.

Richard worked on the carvings at Rongomaraeroa at Te Papa Tongarewa and was awestruck at the contemporary vision of Cliff Whiting (1936 – 2017).

“We were lucky to be tono’d (requested) by Cliff Whiting, and I was lucky too because Cliff was one of the artist models that I did a lot of my visual arts using custom wood and modern colours ... To work under Cliff was immense for me, it was a turning point.” 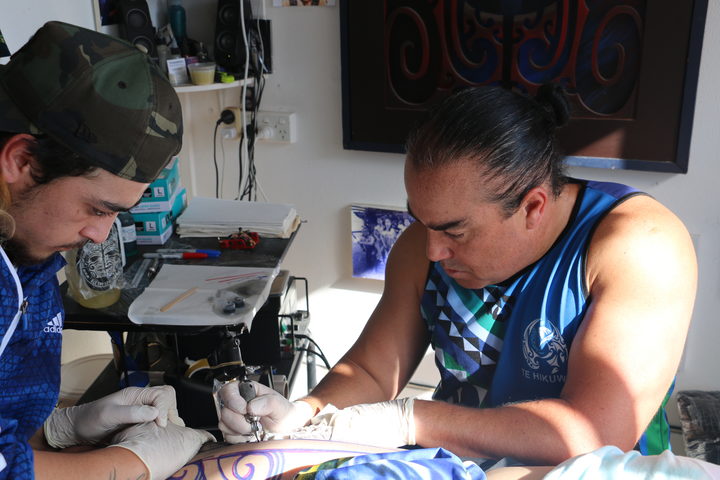 A Puhoro is moko on the back, buttocks and thighs, the completed moko is called Peha. Photo: RNZ/Justine Murray

Aside from his career as a moko artist, Richards is also a graphic artist, teacher, painter and carver.

In 1996, Richard went from stretching the skin as an apprentice to applying moko at a public moko exhibition Patua curated by Sandy Adsett at Wellington City Art Gallery.

“I was sitting there stretching and Derek just handed the gun over to me and he said You wanna do moko? Here you go.

"So this was after four years of stretching. He watched my first couple of lines, he corrected my techniques a little and said I’ll see you later.”

Derek left, then returned later that afternoon with some constructive criticism about Richard's line work and what he needed to do.

The rest is history.

At the time moko was going through a resurgence, despite the narrative that it was a dying art form. 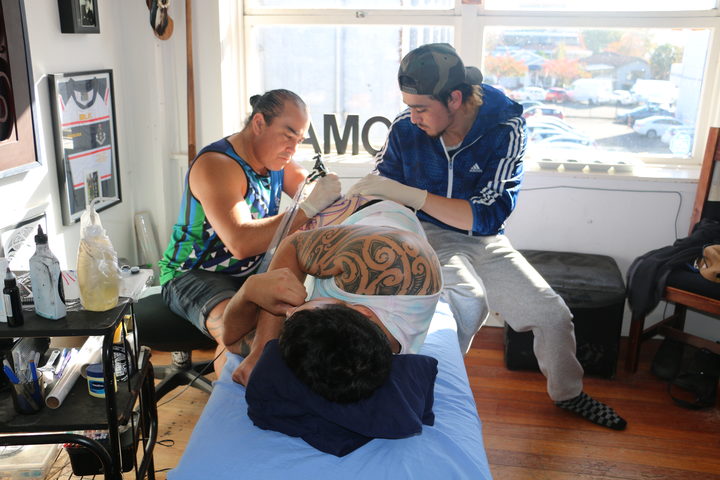 When Richard first moved back to Rotorua in 2002 he says he was the only one doing moko at the time.

The landscape has changed and today there are 20 moko artists who are either studio or home-based, he says.

Richard set up a moko space at Ohinemutu Marae and moved to Koutu Road at Tumaihourangi Marae.

In 2007 he moved to his current studio in downtown Rotorua.

“I found that at the marae it was an awesome setting and it enhanced the kaupapa, but it was a little bit intimidating for people that weren’t used to the marae to come onto the marae and receive their moko. Moving into town was a bit more inviting, I guess.”

The name 'Toiariki' is derived from two words – 'Toi' meaning 'arts' and 'ariki' from 'Te Wai o te Ariki', the thermal activity in the region.

“That comes from Ruaumoko. My catchphrase for Toiariki is 'Art of the God' and Ruaumoko is responsible for giving us the art form of moko.” 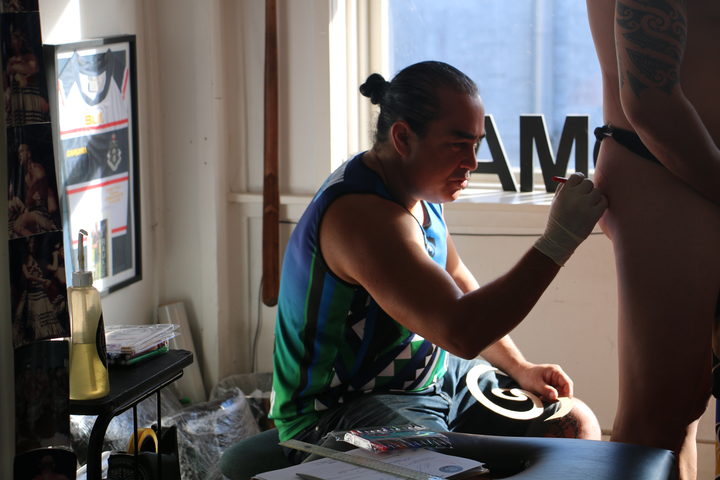 Taa Moko sessions for Shannon's puhoro will take between 30 - 40 hours spread out over a few days. Photo: RNZ/Justine Murray

Inside Toiariki studio there is evidence of Richards keen passions – framed rugby jerseys sit in pride of place alongside art canvasses and a few pieces by his son who is studying spatial design.

Richard's tattoo chairs sits next to the window and the walls are adorned with Goldie and Lindauer paintings that include Wharepapa from Nga Puhi, Tikitere of Rotorua and Te Aho o Te Rangi Wharepu of Ngāti Mahanga, and Rangitopeora of Ngāti Toa Rangatira. 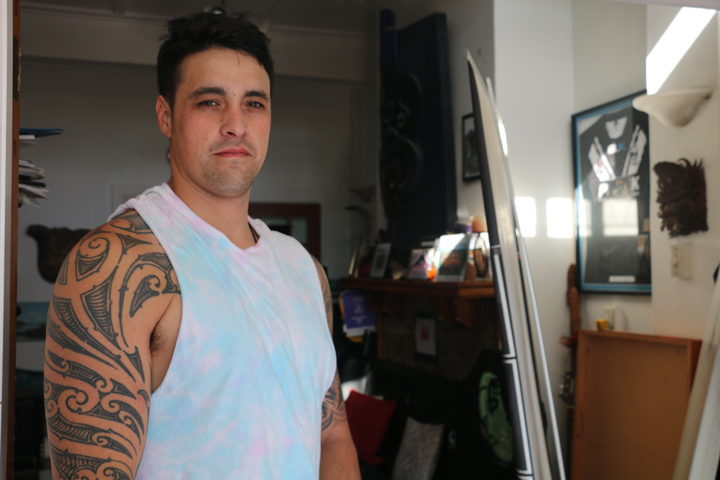 Shannon moved home to Rotorua after living in Australia for several years, his puhoro depicts his whakapapa. Photo: RNZ/Justine Murray

Shannon Mohi has come to get his puhoro done that will take up to 40 hours to complete. Spread out over four days, the design will depict his whakapapa and whanau.

The inner leg area is painful as the skin thins out, but Shannon says he can handle the pain and that it’s nothing compared to what his grandfather is experiencing.

He was one of Shannon's inspirations to get puhoro done.

“When it gets really tough I just think of him and know that this can’t be nothing compared to what he is going through so he sort of helps me through it.”

Puhoro, according to Richard, is the bottom part of the waka that thrashes and cuts through the waves. 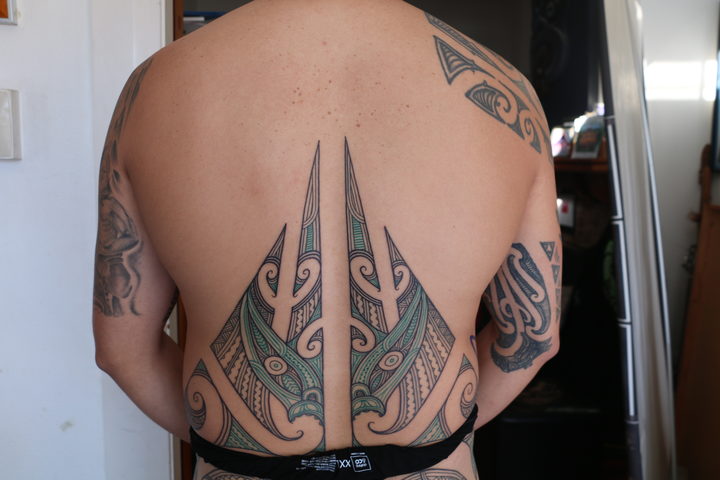 “It was the source of the speed breaking through the waves. When the waka were parked up after we migrated down from Hawaiiki we took the design of the puhoro and put it on the legs and called it the puhoro design, hence the thighs being the source of your speed. The buttock area is the 'raperape' and the 'pai tuara' is the lower back. The overall design is the 'peha'.”

Shannon Mohi has wanted to get his puhoro done for some time.

“It’s something quite honourable to represent my iwi and family. [My family] are pretty proud that I’m getting it done. Moko is like broadcasting my whakapapa for everyone to see. I want to wear it on me because I’m proud of where I come from. I’ve done sessions about this long before but you still feel every line.”