Huia Hamon is a singer, artist and mother who runs Kog Studio with her partner Chris Chetland. The couple's home is tucked away in Waitakere and most days is a hive of creativity. Te Ahi Kaa pays a visit. 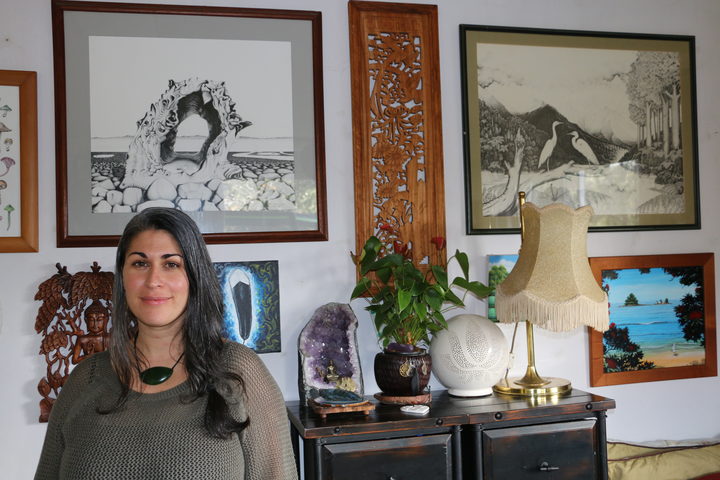 Huia Hamon at her home in Waitakere, art in the background is by her grandfather Rei Hamon. Photo: RNZ/Justine Murray

Huia Hamon is kept busy these days with producing music, mentoring young and upcoming artists and being a mum.

Creativity is a common theme in her family - her father Awanui is an artist and her grandfather is the late poet and revered artist Francis Rei Hamon (1919-2008) whose pointillism-style of art is displayed in her home.

One artwork is a print and another is an original, Huia says.

“I got it off TradeMe, I got all of his originals on TradeMe, people just selling them, but usually they have paid a lot. I’m like, can I give you this much for it? And they say of course you can… Papa painted 300+ originals.”

The print is Jewels of Okarito - a copy of the original that was gifted to Queen Elizabeth II in 1977 by Sir Robert Muldoon during a state visit.

Huia and her father run an online website and she's keen to hear from anyone who may possess her grandfather’s work.

“If you think you have a Rei Hamon original in the house please contact me… I’m always looking for his paintings. I just want to know where they are."

Aside from her online scouting, Huia is a busy musician who has worked with many artists in the NZ industry helped alongside her partner Chris Chetland - an award-winning audio engineer also known as Baitercell.

In the past decade, they’ve worked with Rob Ruha, Ruia Aperahama, Scribe and many others.

The couple’s home is tucked away in Titirangi with a panoramic view of the Waitākere ranges.

It’s here they run Kog Studios where they record, mix and master tracks. Huia’s job is largely behind the scenes with vocal coaching and editing, mentoring and promotion.

In 2012, Huia released her debut album Huia’s Waiata with some songs written when she was 16 and one inspired by one of her grandfather’s poems.

During the production of the album, Huia suffered a personal tragedy.

“I lost a baby quite early when I started to record this album then I become hapu and had my baby before it was released. When that album came out I literally had my newborn with me so it was quite trippy.”

Huia takes musical inspiration from her whakapapa (genealogy) and her French, Slavic and Italian heritage.

'Kōrero Au ki Ngā Rākau' from her album Huia’s Waiata is based on Rei Hamon's poem I Speak to the Trees.

The poem is based on his frequent observations in the forest.

Rei Hamon’s work as a conservationist stemmed from an incident where he worked at a sawmill in Thames and oversaw the felling of a large old kauri tree. It disrupted the kākā and kereru birds who had been nesting there.

He resigned from the job that day and vowed never to fell another healthy tree. 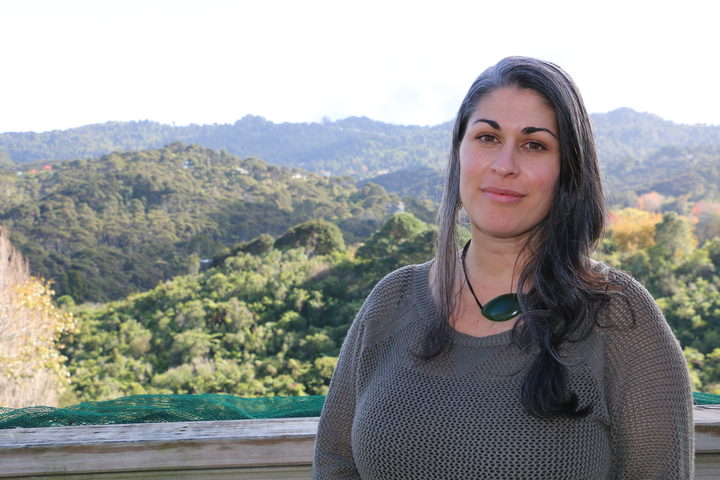 Her grandfather petitioned the Government and the kauri industry in 1971 about practices in the logging industry, Huia says.

“My koro and his brother Roger, who was a pilot went up to the Hunua Ranges, they got dropped off and hiked to see where the loggers had been. They took photos showing they were healthy…they did aerial flights to show the trees had been cut down.”

The felling of kauri ceased under The Kauri Policy which came into effect in 1973. That policy introduced a preservation measure with the planting of 40,000 Kauri in the Coromandel Forest Park.

Huia plays support to French band Deep Forest in Auckland this weekend. She is currently writing for her new EP which is set for release next year.