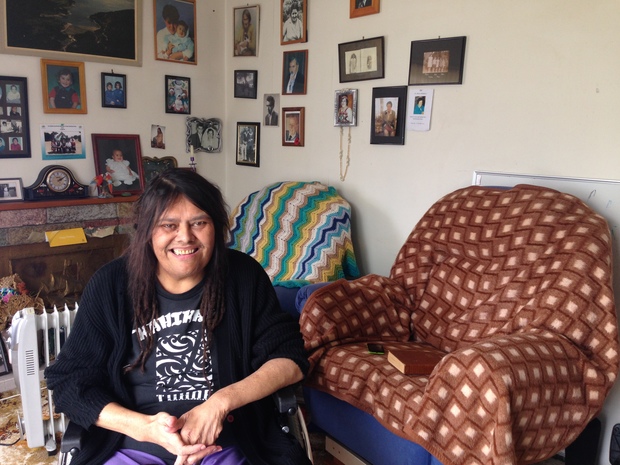 It took me a wee while to find Erana Hemmingsen’s house when I visited her in Wainuiomata in October 2015. I remember thinking that I would possibly hear loud māori music booming from her home, perhaps a Te Mana Motuhake Ō Tūhoe Flag fluttering in the wind.

Instead her small home, the one she’d lived in when she was two years old, was in the middle of a long street, a five minute walk to the shops.  This house, nestled into a suburban flank of the Rimutaka range was the first one available to her parents when they shifted to Wellington, she says they didn’t mind being ‘over the hill’.

There was a wheelchair ramp outside the front door and for a fleeting second I wondered who it was for, then I join the dots in my head - ah yes, it’s for Erana.

You see, Erana’s tall, imposing stature was the image I remembered from seeing her perform at many kaupapa māori events over the years. Not one to parade around on stage, she just stood there, her towering frame effortlessly belting out a song.  Erana would duet with her sister Jackie at the annual gala days at Te Kura Kaupapa Maori o Nga Mokopuna and at the various māori music events on the calendar.

Her long dreads hung well down her back, she sometimes wore light purple John Lennon-esque glasses, there was a definite presence about her. So for her to be in a wheelchair was not at the forefront of my mind when I knocked on her door.

My visit was carefully calculated; it had to be a time when she wouldn’t have any doctor’s or hospital appointments and when she would be able to exert the energy required to host a visitor. And she had to want to talk. I didn’t want to assume that this well-known māori radio broadcaster, a keen interviewer herself, would say yes; things had changed and I was mindful that she was in poor health.  But a few facebook direct messages, texts and calls later, we’d arranged to meet.

The reason for my visit was initially to talk about hospice and why māori choose to use hospice services. Linda Olsen, who works at Te Omanga Hospice in Lower Hutt suggested I get Erana’s point of view. Erana, it turned out, had known Linda when she was a child.

To be clear, at the time of my visit Erana hadn’t stayed at the hospice but she did use their day services.

She opened the door with a smile and with my tendency to overly express my gratitude, I must have said thank you a dozen times over the next hour. Working as a māori producer, the words of my late mentor, Richard Knight rang in my ears. He told me that ‘for every story you do, ask yourself this… who is doing who the favour?”

For Erana to say yes to the interview, the ‘hōhaness’ of me interrupting her morning; let’s just say I added another ‘thank you’.

Within a few minutes, the interview turned into a chat reminiscent of ‘This Is Your Life’. Instead of talking about palliative care, it ended up being about her colourful career.

The Hemmingsen name is Danish, and one of her wishes was to visit Denmark.

“I would have liked to have gone to Demark to see where the Hemmingsen’s come from, on my mum’s side we are Whiteheads but I know they came from England. But I wouldn’t have minded going to Denmark, I might be the only brown person. I used to imagine going there and saying I’m a Hemmingsen”

Erana was largely associated with Wellington-based iwi radio station, Te Upoko o Te Ika and eventually became the station’s Programme Director.  Talkback was her thing and the first subject she talked about on the airwaves stemmed from a visit to TVNZ and the food served in the Green Room.

“I had worked in iwi radio for many years and then I’d get called back in to help lift the radio station. For me especially for Te Upoko o te Ika, because I had been there since the beginning, if they called out for help kei te pai, I would help in whatever way I could.”

Erana spent a few years at Mangamuka in the North where she helped to train up-and-coming on-air staff.

She qualified as a teacher and worked in Kōkiri Marae Kōhanga Reo and relieved from time to time at Te Kura Kaupapa Māori o Nga Mokopuna.

“There was one part where I would go there (the radio station)  for the breakfast show, do the show then take off for school. I enjoyed it....then it would be funny because the kids would say; Whaea we just heard you on the radio.”

Erana,  her sister Jackie Hemmingsen and Heni Te Poono formed the band Tuahine. They toured from time to time, released albums and were part of the tight-knit māori music community in the 1980’s. Erana said her sister, who went by Sister J, was a talented songwriter.

“There was ourselves (Tuahine), Black Katz and Ahurangi (which was Hori Chapman), and then Tauira came in, there was some new ones coming in and we were like, gosh we are getting old”

When I met Erana she was had lung cancer with impacts on her kidneys and liver as well.

When I visited her in October 2015 she described how the doctors had initially given her four months, but it had been two years since that prognosis.

At the end of our kōrero, she added;

“There’s a lot going on in the world, all I want to say is follow your dream whatever it is, don’t let anything get in the way. If you hit a stumbling block, that’s alright just get up again, or maybe you go and take a slightly different road. Things are out there, and they’re out there for you to take advantage of.”

Erana Hemmingsen died on May 15th, 2016 and lay at Te Kakano Marae and Kōkiri Marae in Lower Hutt, before travelling to her final resting place at Waikaremoana.

Note: The programme about Hospice will air at a later date.