Te Ahi Kaa features coverage of a panel discussion hosted by The National Library to commemorate 40 years since the 1975 Land March. The panelists are Tautoko FM Manager and activist Cyril Chapman nō Ngā Puhi; Community activist and Taranaki-based social entrepreneur Vivian Hutchinson and activist and Professor of Law at The University of Auckland, Dr David Williams. The men took part in the march and talk about their experience. The panel discussion is facilitated by Paul Diamond who also curated the exhibition Not one more acre. Archival material from 1975 is woven into the show thanks to Nga Tāonga Sound and Vision. Dr Ranginui Walker, John Rangihau (1919 - 1987)  Tom Poata (1936 -2005) Hana Jackson, Saana Murray (1921 - 2011) Whina Cooper (1895 - 1994) and Hone Tuwhare (1922 - 2008) share their perspective of the land march. 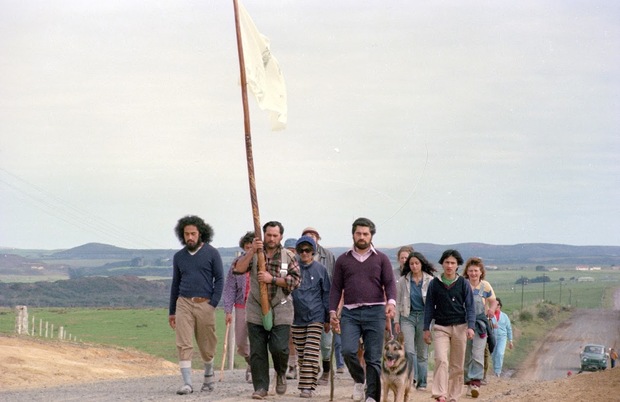 On 13 October 1975 Dame Whina Cooper lead the march in protest against the scale of the loss of Māori land ended at the steps of Parliament. Te Roopu o te Matakite (Those with foresight) began the march from Te Hapua with only 50 people. At the instructions of Whina Cooper there were no placards or banners.

This March was going to be an expression of dignity and we weren't going to come down the country shouting to anyone, she (Whina) made it quite clear that there would be no placards. We were walking over the land that this protest was trying to protect. The mana of that land was coming with us and that needed to be treated with respect... For a young Pākehā boy it was like an initiation ritual into a a different sense of yourself as a New Zealander - Vivian Hutchinson

At the time of the march, Cyril Chapman was twenty years old and held the pou whenua (carved post),  Community Activist Vivian Hutchinson was part of the organising committee, and Dr David Williams was an activist for the Citizens Association for Racial Equality (C.A.R.E).  The exhibition Not One More Acre, The Māori Land March 40 Years On  features a photo essay of 300 photographs taken by Christian Heinegg on public display for the first time. 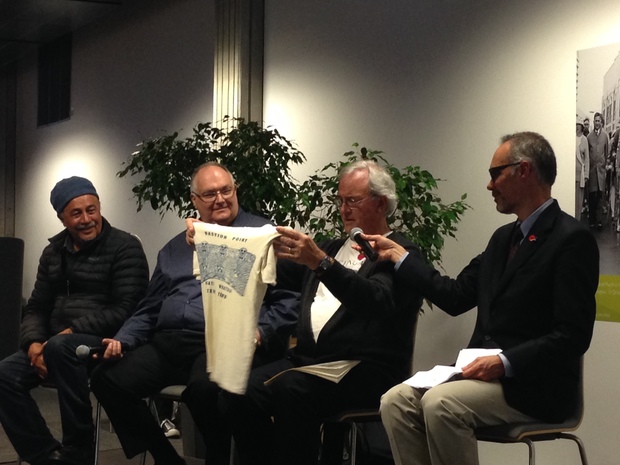 The march itself took six months of planning. Media coverage was slow in the beginning, but gradually grew as the group came down the country. Vivian Hutchinson says the famous picture of Whina Cooper holding the hand of her mokopuna Irina and her walking stick in her right hand, speaks a thousand words. The procession would gain momentum along the way, people would cheer on the roadsides, money was collected and food was given out, the group walked 20 miles a day and were not allowed to smoke or visit the pub on the way down. The physical challenges were inevitable.

The car I had got a puncture at midnight in Waikato and we had to change it and we couldn't find a spare so we filled it with grass. We stuffed grass in the tyre, we spent three hours plucking grass on the side of the road we pushed that all around, we put the tyre back on and drove on, but we made Te Hapua. We made it for the service in the morning - Tom Poata (archival recording, 1975) 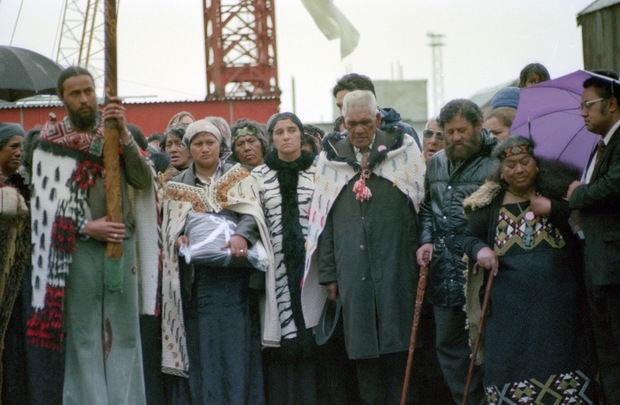 The 2004 Foreshore and Seabed Hikoi was the last protest seen on the steps of parliament of a similar scale to the 1975 land march, but because of technological change and digital media,Cyril Chapman says the face of Māori protest is changing.

I think there are different ways of doing... I see people with cellphones, the Facebook. That seems to be the main communication of the new generation. If you go on Facebook and social media, that's where they are posting. There's a lot of interaction not only locally, nationally  but globally so that's a whole new thing we are dealing with.  We are facing huge challenges – basic challenges like having enough kai for our kids? Those are things we can all relate to - Cyril Chapman on the future of the land march protest