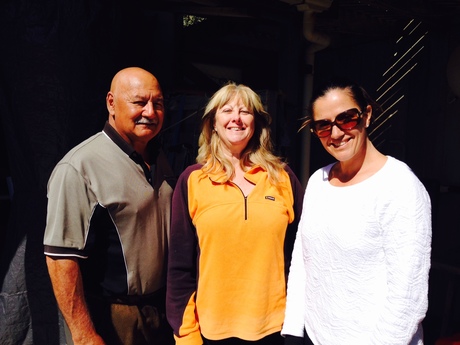 Pat and Tania Hakaraia run a lawnmowing business in Otaki. Their expertise was called upon when Pat's cousin Libby Hakaraia was directing the short film The Lawnmower Men of Kapu.

This year the Otaki couple were part of the organising committee to run this year’s Inaugural Māoriland film festival.

I just saw myself as a staunch supporter of what Libby and Tainui were doing, I felt that, for people  here in Otaki we don’t have a lot of opportunities, and so if we can encourage our younger generation to step up to have a look at what goes on in this  (film) industry and find their  little part they can play,  then this is gotta be good for everyone in this town. - Pat Hakaraia

The trio are attending the world’s largest indigenous film festival, ImagineNATIVE in Toronto, Canada.  Pat will select a number of short films to feature in the children’s programme at next year’s Māoriland film festival. Tania will find out more about the operational systems of ImagineNATIVE and Libby will be a part of the prize jury. Justine Murray talks to the Hakaraia whanau before they go on the trip.