Dr Clive Aspin is putting his considerable experience in indigenous health to good use in his current role as a research fellow at Sydney University and he's noticing similarities between the experiences of Aboriginal and Torres Strait Islanders in Australia and Māori here at home. He talks to Maraea Rakuraku about his research findings and much more, including his anxiety about contributing to the economy of a country other than your own.

The largest exhibition ever to be staged at Aratoi, the Wairarapa Museum of Art and History in Masterton, is Wairarapa Moana. Justine Murray attends the official opening of the show, which presents the history of Lake Wairarapa and its surrounding settlements. Curator Haami Te Whaiti and local inhabitants of the area share their insider perspective of the experience. 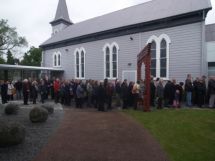 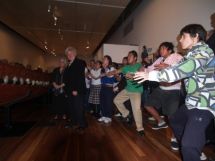 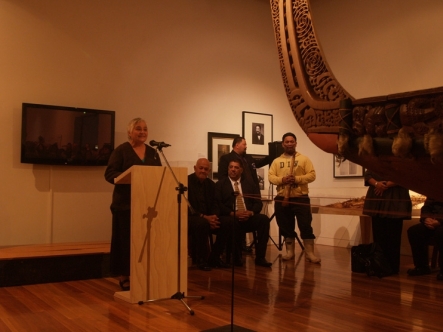 Hon. Tariana Turia addresses the crowd near the prow of the waka Te Heke Rangatira, the largest waka in Te Papa Museums collection, which was restored and returned to Wairarapa for the exhibition.

Next weekend (20 November, 2010) Kawerau will be inundated with Taekwondo athletes from around the country competing in the inaugural Māori National Taekwondo Championship. Excited at that prospect, organiser Matt Ransom talks about what audiences can expect.

Can Māori knowledge contribute to urban sustainability? Co-editor of the book, Tāone Tupu Ora: Indigenous knowledge and Sustainable Urban design, Keriata Stewart seems to think so and suggests that more and more architects and city planners agree. She talks with Maraea Rauraku about how tikanga Māori can revolutionise city planning.