This year, Tapu Te Ranga Marae hosted the National Kaha Queer Youth Hui where Justine Murray met with takatāpui Māori negotiating the balance between cultural identity and sexual preference. Takatāpui television presenter, Levi Bristowe (below left) describes his experiences growing up in a small rural Northland community where while there was little room for him to express his sexuality he was nurtured in his taha Māori. Lucas Jones nō Ngā Pūhi, Muriwhenua, Te Hiku o te Ika combines his passion for Te Reo Māori and the sexual health of Māori, having just completed hauora studies and as a staff member at the Maori Language Commission - Te Taura whiri i te reo Māori. 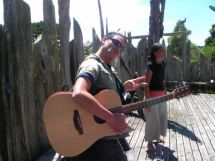 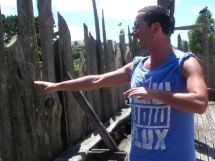 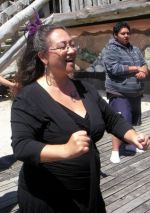 Conference organiser, Elizabeth Kerekere nō Rongowhakaata, Aitanga a Mahaki, Ngai Tāmanuhiri, discusses how her role with the OUT THERE! * Queer Youth Development Project, an initiative between Rainbow Youth and the New Zealand AIDS Foundation, provides a holistic approach to the sexual and gender diversity of young people.

Out there! project leader Elizabeth Kerekere participates in the waiata practise at the National Queer Youth Hui 2009.

Maraea Rakuraku, literally has a 'whale of a time' when she heads to the crayfish capital of the world, Kaikoura and samples, no, not koura but Whale watching. From the tour bus to the aftermath of sighting whales, Maraea gives an eye witness account that features a cast of hundreds.

In 2006 newspaper headlines screamed with the indignities suffered by takatāpui Stanley Waipouri (1967- 2006) when he was murdered in his Palmerston North home. With homophobia rife and the sensationalist approach by the media, the Waipouri whānau despaired whether the perpetrators would be brought to justice. All of this was captured by television producer Jude Anaru, in a 2007 Takatāpui episode focusing on hate crimes directed against takatāpui and the death of Stanley Waipouri. The episode then went on to receive that year's Media Peace Award. An interview recorded at that time between Anaru and broadcaster Willie Jackson, discuss hate crimes, Stanley Waipouri and the controversial gay panic defence.

I Te Wa by Mika from Iwi Hit Disc 7

Boy from Ipanema sung by Mika from the Album Kapai Kabaret