Na te Maori mo te Maori - By Maori for Maori, is the catchphrase in this week's programme as encapsulated by guests from the Arts and Science fields…

It's all about reciprocity for Ngati Kahungunu scholar, Dr Adele Whyte whose involvement as a student in a mentoring programme for Maori Science students; Te Roopu Awhina Putaiao has paid off. Nine years after starting in Te Roopu Awhina Putaiao she is the Maori Fellow in the School of Biological Sciences at Victoria University in Wellington mentoring upcoming students and exciting the next generation of scientists, by taking science to the marae. In January 2008 Pukemokimoki Marae in Napier was the very first marae to experience what is an attempt by academia to demystify and encourage Maori involvement in the sciences. 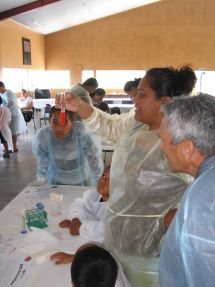 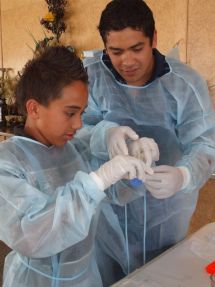 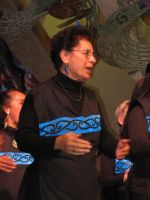 Kahungunu composer Paraire Tomoana wrote E pari Ra in 1918 as a tribute to Maori soldiers killed in World War 1. That song along with others was performed by Taikura o Ngati Kahungunu whanui at Te Papa a few weeks ago in a celebration of kaumatua kapahaka. Maraea Rakuraku met with some of the performers including Whakaki bred, Nina Huxton (pictured left).

Kahurangi Maori Dance Theatre have been 'rocking' stages for 20 years. The group is led by Tama and Win Huata. Maraea Rakuraku captures Win Huata's response when she receives an award acknowledging her contribution to Kahungunu Kapahaka. 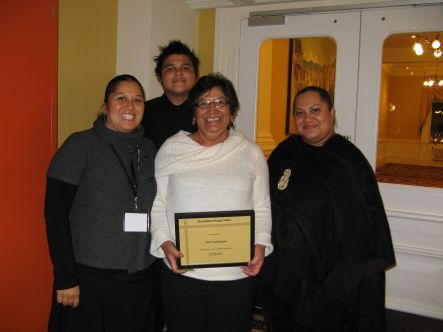 Win Huata and her children.

Maori presence on the national and international film scene is on the rise. Part of which can be attributed to big time Hollywood producers flocking to our shores taking advantage of tax benefits while capturing the scenery both green and 'brown' on their lens. Right there in the background exist Nga Aho Whakaari. An organisation set up to represent Maori in film, television and video. We talk to executive officer Pita Turei who outlined to Te Ahi Kaa, the role of Nga Aho Whakaari

In this weeks programme we feature Waiata from the following artists: