Let us keep close together, not far apart is the meaning of the whakatauki this week, as used by Honouring Theatre in its national tour of Aotearoa (16-27 June) and demonstrated, by Maraea Rakuraku who recorded the group in the days leading up to their opening night in Rotorua.

Hosting Indigenous theatre troupes from Canada, Australia and Aotearoa a noho marae at playwright Miria George's marae, Kearoa set the tone for the weekend before, a trek of historical landmarks - Te Turi o Hinengawari and Horohoro School, as led by Kaumatua Bob Young.

Wounded Knee lies within the boundaries of Pine Ridge Reservation, in South Dakota and is an example of one of the more horrific encounters between Native Indians and white Americans during the later part of the 19th century. In 1973, it became the site of an occupation led by members of the American Indian Movement (AIM) attracting Indians from across America including a young mi'kmaq woman, Annie Mae Aquash. Aquash became one of the more active and prominent female leaders of the movement until her death in 1975. For over 30 years it was suspected the FBI was responsible, until evidence uncovered in 2003 suggested the contrary. The dynamics leading to Aquash's death are played out in the Canadian production Annie Mae's Movement. 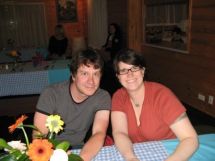 Pure tobacco plays a specific cultural role for Native Indians, as one of the 4 sacred herbs (the others being, sage, cedar and sweet grass) Michelle St John describes the significance of tobacco to her people, before breaking out into a song, Our land, Our Mother written by Pura Fe, and popularised by the Native Indian woman a cappella group Ulali. 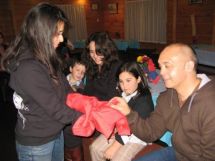 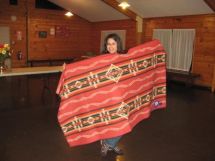 Jamie McCaskill and Kali Kopae sing a number from the Maori production, He Reo Arohaas composed by Hone Hurihanganui

A prayer by Ulali All my relations closes Te Ahi Kaa.