Thirty years ago, this weekend (25th May, 1978) the then Prime Minister Robert Muldoon ordered police and the army onto Takaparawhau (Bastion Point) to physically remove Ngati Whatua who alongside their supporters had been occupying the land for 506 days, in a protest at plans to privately subdivide and develop land, that had originally been taken by the Government for defence purposes. The action is a key moment in the history of Maori protest … 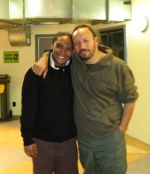 It's now 33 years since the end of the Vietnam War. As part of Tribute 08, Te Rakau Hua o te Wao Tapu Trust was commissioned to write a play - Ka Mate Ka Ora. The group is run by Jim Moriarty and Helen Pearse-Otene who use drama to work with troubled youth. We'll hear about the production from both the director, (Jim Moriarty) and actors (Jimmy Mareikura and Chris Faircliff) perspective.

Mauao (Maunganui) may be the extra in a mythical love triangle but she is certainly loved. Whakarongo mai ra ki te korero a Colin Bidois mo Te Hokinga mai o te mana o Mauao ki nga Iwi o Tauranga Moana. Colin Bidois explains the history of Mauao and the implications of the return of the mountain to his people.

When you begin pulling pints in a Karaoke bar and end up studying opera in Wales how do you, well, keep it real? Maori boy made good Phillip Rhodes who won the 2007 Lexus Song Quest talks to Maraea Rakuraku about his childhood and how he keeps it all from going to his head.

Te Taurima Whakaata Maori i Te Wairoa (The Wairoa Film Festival) is back after a two year break, kicking off Matariki celebrations for Ngati Kahungunu ki Te Wairoa. Launching from Wairoa over Queens Birthday (30th May - 2nd June) the festival is jam packed with films examining environmental issues. Organiser, Leo Koziol talks with Maraea Rakuraku about the significance of the theme and the work of filmmaker Barry Barclay (1944 -2008).