Alice Cooper: 'Covid-19 was like being hit by a truck'

Alice Cooper overcame a crippling addiction to alcohol and cocaine decades ago, and has had to fend off a new nightmare in the past year when he caught Covid-19.

The 'godfather of shock' joined Sunday Morning to discuss his experience with the coronavirus, and hitting the top of the Billboard charts with his latest album Detroit Stories, 50 years into his career. 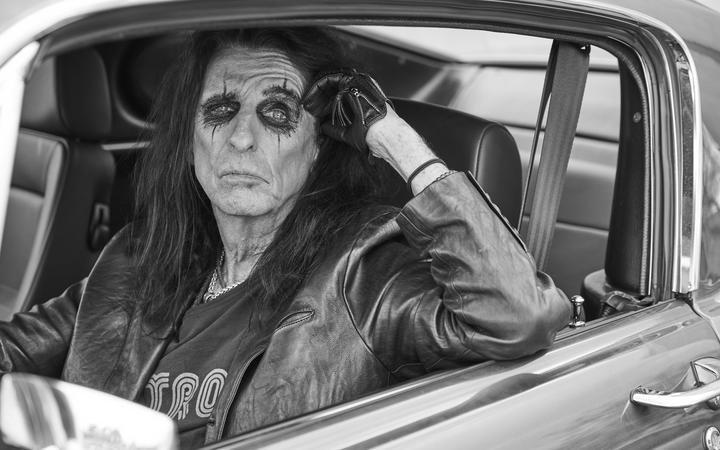 Alice - born Vincent Furnier - is a survivor in every sense of the word, having given up his addictions to alcohol and cocaine 38 years ago, after realising that he was heading the same way as his "big brothers and sisters" like Jim Morrison, Jimi Hendrix and Janis Joplin - all of whom he used to drink with.

"When they started dying at 27 and they were your big brothers and sisters, you started getting the picture that okay, 'there is going to have to be an adjustment on this rock and roll thing, if I want to live to make 30 albums'."

Now at 73 years old, Alice is still working constantly. He plays in two touring bands and had to cancel 180 cities when the pandemic hit.

But he had to slow down late last year when he caught the coronavirus.

Speaking to Sunday Morning from Phoenix, Arizona, where things are now "pretty good", Alice said everything was open and more than half of the population have been inoculated.

While life was getting back to normal, Alice tested positive for Covid-19 shortly after Thanksgiving.

Although he did not show many of the nasal and congestion symptoms, Alice says it still hit hard.

Alice's recovery has been helped by the success of Detroit Stories, his 21st solo studio album. Released on 26 February, it debuted at #1 on Billboard's Top Album Sales chart - the first chart-topper for Alice in the 29-year history of the album sales chart.

A love letter to the US city where Alice was born and the band was first embraced, Alice says central Detroit is no longer as full of drugs and crime as it used to be, but also remembers the day when the city could support three or four major rock shows a night, as well as a strong Motown sound.

"The Motown guys and the rock and roll guys all partied together, we were all friends. So in the music business they separated us - here's Motown and here's rock and roll - but in reality we were all just musicians."

Alice says Detroit has always felt like an "outcast" to him, and the Alice Cooper band was the same thing.

"And finally people started liking it of course, but we forced their hand. At the beginning we were totally outcast and the only place that really wanted us was Detroit . LA didn't like us, San Francisco didn't like us, but Detroit said 'yeah, that's our kind of band'."

Putting on a show

Alice says the secret to still topping the charts and still drawing a crowd after half a century of touring is that it all comes down to the quality of the record.

"You can't stop a good song, you can't stop the energy. Alice has become sort of a household name now, but everybody still views me as rock's villain. And sort of rock's Ziegfeld or Busby Berkeley. They know that when the show comes to town, it's almost like a Cirque du Soleil or some kind of strange vaudeville. And every year, we try to change it so you're going to see a different show every time.

"But I think people come to hear the songs. We had 14 Top 40 hits, songs were getting played on the radio all the time, for 50 years! And if you keep that kind of quality up, I think that it will get played."

While the dozens of songs he has created might last forever, Alice says the persona he has crafted over the years could also last long after he has departed this world.

"When I'm dead 50 years from now - I'm giving myself 50 more years - somebody else should play Alice Cooper. He's a character like Jack the Ripper or like Jekyll and Hyde. People go out at Halloween dressed like Alice Cooper.