Thirty years ago Catherine King and Wayne Adams decided to start a project to build their dream home - a half-acre floating complex off the coast of western Canada, which they have dubbed Freedom Cove.

The pair, who are both artists, are moored off Vancouver Island, and mostly self-sufficient. They have a full life maintaining the hand-built structure which encompasses a dance floor, candle factory, art gallery, four greenhouses and a sprawling garden, all made from materials salvaged over the years. They talked with Sunday Morning about their weird and wonderful home. 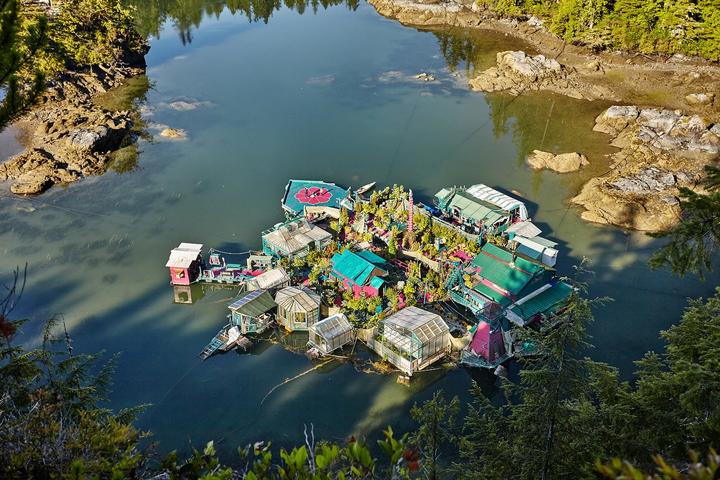 King and Adams are thought to be the first to build such a compound over the water in Canada, although it's now become something of a trend, dubbed seasteading.

Before beginning the build, the base of the complex had a previous life as a fish farm.

"We were both artists living in [the nearby small resort town of] Tofino," King said. "We'd both always had the dream of living out in nature, and we felt that floating in nature was a good way to go because you could be in nature without interfering with it.

"We found the cove that we're currently in, and a storm blew in all the wood that began the building of our home, so we felt that was a good omen that we were on track and it was the right time to do it."

"One of my first trades was a draughtsman, and building was a very big part of my learning growing up - I did my homework."

A quarter of a million pieces of wood and found materials have gone into the build.

"And I know every one by name," he laughed. "Over many years I managed to recycle some of the old [structures], and that allowed me to build my own floating island.

"And technology's very important, and the future of floating on liquid is really changed, it's made it possible anywhere."

They welcome visitors for short tours of their island.

"We're very fortunate, we're an unusual find," he said.  "And we do get... people that come and visit us looking for something like what we do... asking us very good questions, how do we do it? And we share that. We share our home with the world."

The island is a tightly woven mass of connected walkways, lush garden foliage and greenhouses, and wooden structures painted turquoise and magenta. 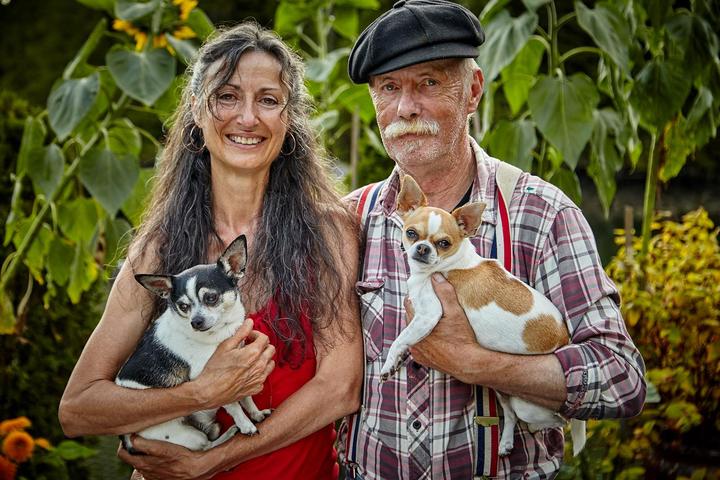 "We both picked the colour," King said. "[The magenta is] the colour of the fireweed plant that grows here that is the first plant that comes up here after forest fires. So to us it's a symbol of rebirth, and it adds a beautiful glowing colour in the winter time when we have very grey skies."

The environment surrounding them saturates everything they do, Adams said.

"We chose the west of Vancouver Island, a temperate rainforest, and it's such a special place to live.

"You experience all your senses by living here, smell, sight, sound  - and all of this project is about that. It's really a model of how can you use all your senses in your life and be immersed in nature, because that's what affects our art as artists."

King's dance floor projects over the water at the edge of the complex, where she does tai chi, qigong, yoga and dancing, while looking out to the surrounding forest.

"I make sure to keep moving every day, as well as the moving I do in the garden, so... I'm always doing something," she said.

"There are some practical advantages to being on the water as well, for example if we were on shore then growing my garden would be 10 times more challenging. There's that many more insects and things that like to eat the garden - bears that would be tromping through, and deer.

"So when we're on the water we don't have to worry about that. We have a beach around us at low tide, and everything walks around us and never bothers to try and come over to us, because we don't put any smells out that would draw any creatures over." 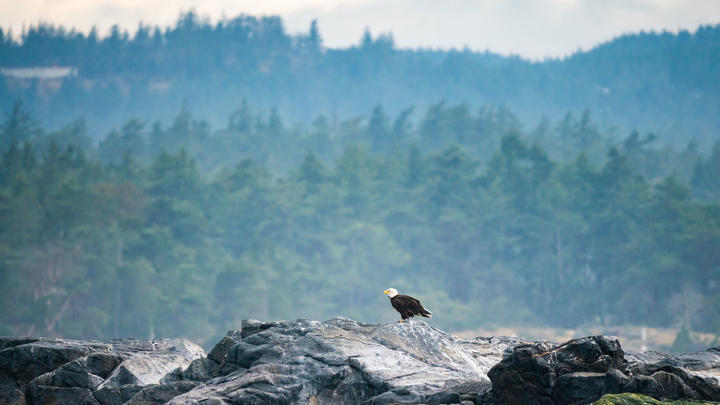 Nearby they regularly see seals, bears, eagles and more.

"There's nothing that's dangerous to us - the bears do swim in the water, but they don't come up because they're quite near-sighted. So they don't see anything, and if they don't smell something to draw them over they just don't bother.

"We do have mice that swim over from shore - that's our one little garden predator, and I'm a softey so I live-trap them, and then paddle them out of the cove and let them go on shore somewhere.

"And yes, we have bees - they're wild bees that come from the forest here, we have yet to find where they come to, but they arrive every year and I'm very happy to have them."

From the start they've endeavoured to have as little negative effect on the surrounding environment as they can.

"We have a [sewage] treatment plant, and everything we use is recycled," Adams said. "We're very aware of having a low impact here because the beauty of living on liquid is that I can be in a temperate rainforest and not disturb it. All the animals can live here, we don't interfere with each other, so it's nice to be immersed in nature and be part of it, not separate."

On the other hand, they accept that nature will sometimes take a swing at them, he said.

"That's the thrill of being on the ocean, we get hurricane-force winds, and part of my job is to fix it as soon as it's damaged - and I'm just getting smarter year-by-year."

King also, is philosophical about the threat of storms.

"We take whatever storm damage we have as a creative opportunity to do something new and different."

The island has solar power as well as a generator, and the main supplies required include fuel for the generator, propane for the stove and water heating, flour, rice and chocolate for Adams.

"A treat for me would be goat cheese or tortilla chips," King said. "I'm a girl who likes variety, so I have variety in my garden."

Adams has another food source available.

"Catherine's vegetarian, so I eat what she cooks. But I'm a good fish eater, and I fish for dinner. We have two species of crab, prawns, and multi-different types of fish.

"One of the bonuses... if it's too windy I can put the hook down in the middle of the house and catch a fish." 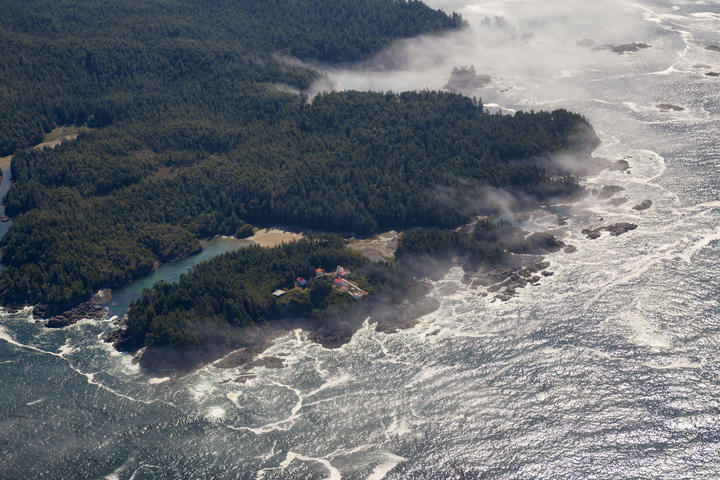 A house on the Pacific Ocean Coast on Vancouver Island, south of Tofino. Photo: 123rf

Getting to town is by boat.

"It's usually every couple of weeks," King said, "in the winter it can go a lot longer, due to weather. We have gone as long as three months one year."

In the last 15 months during the pandemic Adams has only had to venture into town twice.

"We do like each other very much," King laughed. "I don't think you could endeavour to do a project like this unless you did. And we also have a lot of space, in that we have this half-acre and Wayne could be at one end of it, and I could be on the other. Often we have to holler to each other to say do you want to stop for tea, and we're both busy, our days are very full."

And Adams laughs too: "People do often ask us, have you ever been at the end of the dock both wanting to jump in the boat and leave? ...Yes, it has happened."

"One of the beautiful things about living here is there are a lot of artists [nearby] who understand what it means to be alone and do the work. We don't go to town and see each other often, but we have a lot of respect for [artists]," he said.

"We're treated like regular folks, and we get along with everybody - we are very helpful to each other. We live in a neighbourhood where we've got neighbours six miles one way, and six miles another, and we have a lot of respect for each other and it's a great place to be."

As seasteading has picked up more adherents, it's attracted more attention from the authorities.

"They're learning to like us more and more every day," Adams reflected. "We do pay two taxes to be here. We've met just about everyone in the bureaucracy, and let's say for the most part they admire what we're doing and we were a surprise - they never thought we'd built our own floating island without prior authority, but we're getting a pretty good response.

"[Now], all over British Columbia's coast there's a government organisation that's gone around and seen everybody, and we're all written down and they know who's here and who isn't. Organising floating on the west coast has become a very big thing with government." 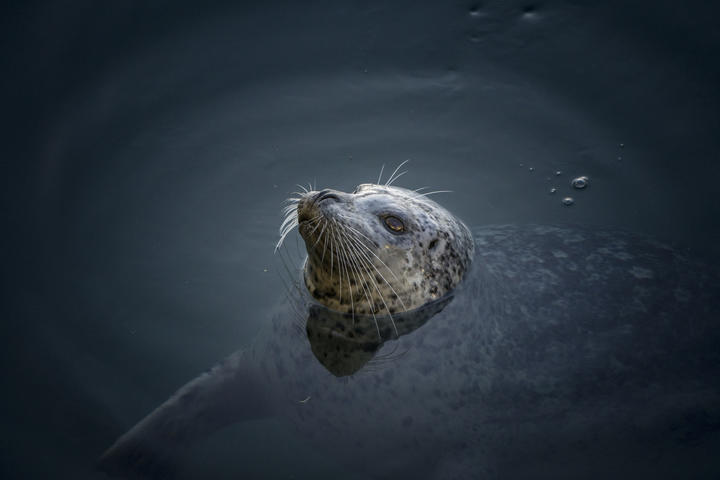 But, their expenses are manageable.

"We live from our artwork, from what we create," King said. "And I'm also in the healing arts as well... I work with herbs and homeopathy, and I'm an energy healer and channeler.

"And we've never worried, we've never stressed about income, we've done a lot of barter and trade over the years, and we just always trust that enough will come in, and we manage, and it does.

"The connection to nature has helped me go even deeper into the stillness within. I have learned more about myself and grown more than I had before I came out here. The further I go in, the more I realise how we are all connected, and how nature is all connected to us, we're all part of each other.

"And if you work with that rhythm - I plant with the moons and the tides - then you really get a grounded feeling, a calm feeling, a peaceful feeling, a trusting and a knowing that everything will go as you need it to - a contentment."

The communications that they can have at their home nowadays has been a more recent thrill.

"We were out here 21 years before we were able to have internet," she said. "Prior to that I wrote letters to everyone, and I enjoyed those years, but I'm very glad that we have the internet now, especially because our daughter and grandchildren are over in Sweden."

They plan to see out their days at Freedom Cove, if possible.

"If you want to do a project like this, lose anything but your sense of humour," Adams said: "And we've managed to do that.

"It's a great way to spend 30 years of doing what you really want to do. No regrets."

And, King chimes in to agree: "I would say the same.

"We are making changes to accommodate that each year as we get a little older, but hopefully we've got a good few years left yet.

"We've done it all with minimal cost, and I'm proud of that. I think it would have been a totally different experience if we had had lots of money, I think doing it with little money and having to use recycled, repurposed materials... it just made it that much more of an adventure and that much more fun."