The phrase "don't judge a book by its cover" is a guiding principle behind the human books project. 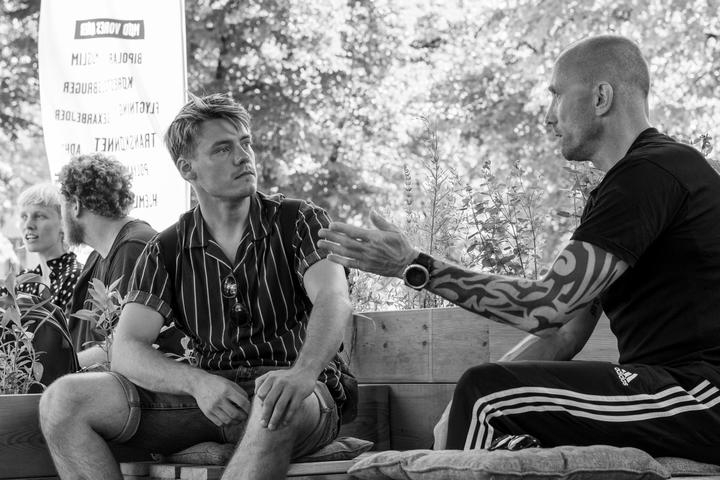 Twenty years ago, Ronni Abergel created a pop-up 'human library' at a local music festival in Denmark where festival-goers could borrow someone for a chat, just like a book off the shelf.

Today there are human libraries in 80 countries, providing a range of volunteers, 'books' who are willing to share their experiences. They even organise diversity and inclusiveness training for big companies, including Google and Rolls Royce.

Abergel talked to Sunday Morning about the scheme and why it's important that we challenge prejudice and understand each other, by talking to people we may never otherwise meet.

The music festival proved to be a challenging, but good starting point for the idea to grow from, he says.

"We were doing a brainstorm to come up with some concept that could really challenge the festival goers - they could choose between the Beastie Boys, Bob Dylan, and going to the human library. So we were in strong competition with big names, and had to come up with some opportunity that was unique and challenging.

"I said: why don't we try to create a safe space where we can meet some of the people we think we don't like? Like a library where you could borrow a police officer, or a night club security bouncer, or football supporter, or some of the groups we think we know things about.

"We make big assumptions, sometimes they're negative, sometimes they're overly positive, but we don't have access to them, so we don't sit down with them. I said if nobody comes we'll have a lot of people sitting there reading each other, while they're waiting to be borrowed.

"We also had the discussion: why would somebody want to be open books? And I said: well listen, if you're bipolar, or you're transgender, or you're a refugee, or you're Jewish, or you're Muslim, or you work in a job that has stigma or prejudice surrounding it, then who doesn't want to be understood? Who doesn't want a chance to explain, to be better understood, potentially better accepted, better included?

The organisation now has premises in Copenhagen, and books' have included football fans, people of different faiths, sexualities and political persuasions, and a person from the controversial Danish community Christiania, and they have a reading garden.

"You grab a person that has something to offer that you're interested in, and then you go in the garden and have a chat," Abergel says.

"You can't walk in and say: I want the guy with the long beard, or I want the woman with the glasses. You can't navigate physically in this sense. But you come in and the librarians will... present you with a list of topics and you choose and they'll bring out the book. So that person is there, present, ready to sit down with you when you come.

"To start, it's half and hour, and then... you can extend the loan, just like your public library. But you can come back the next week and it might be someone else sitting there, ready to talk to you... we have many editions representing the same topic."

"From the first day when readers start taking books from our library at the festival I saw this working, and I thought the whole world needs a library like this, because it works. It creates a safe space where we can challenge what we think we know, and we can learn and we can make up our minds. There's no pre-set agenda, there's no lobbying, there's no telling you what to do, you decide, your courage and your questions and your curiosity sets the path for where we go with this." 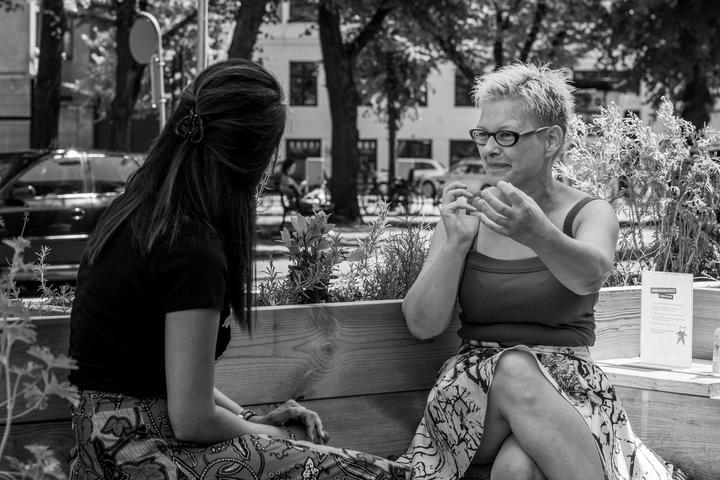 Is there confrontation between the readers and the human books they chat with?

"Often there are people in opposition... but fortunately we have a system that when we recruit our books we train and vet them in such a way that we don't have any missionaries. Not on our collection.

"We have some publishing criteria, we're not just going to bring in books we feel are not relevant or are contradictory to the mission or purpose of our library. But that doesn't mean that readers don't come in and try to argue their case with our books, and we think actually that's very welcome. Because the arguments is what we learn from, the discussions, the exchange and we walk away potentially agreeing to disagree. That's also pretty great.

"I believe that what we're trying to do is get people back to: let's talk, let's find out... alright we're different, okay I don't think that's what I want to do, but at least walking away now I understand and I'm going to be much better at accepting your right to do that.

Abergel says any library has content that potentially could offend.

"To some people it's the macabre, to others it could be the transgender or a cross dresser, to some it would be politicians or journalists. We also publish Trump supporters, NRA members, people who have different political views.

"The boundaries are where you're unjustly stigmatised - for us it's an important criteria... then that experience qualifies you to potentially become a book with us - you're going to need more skills than just the experience, but that's your basic starting point.

"If you're for example a member of an extreme right wing party that preaches hate from their platform, then that's hate speech, that's not unjustly stigmatised - we don't like hate speech... so we would not like our library to be a platform for hate speech. But somebody could still show up and have controversial opinions, be readers and borrow books and express those."

"That's why we have a screening process [for readers also], when you come up to the desk the librarian will sort of vet you also, 'what are you expecting to learn, what do you want to gain from your reading, what questions have you prepared - to make sure that your motivation is to really have an open and honest respectful dialogue about our ways of different, that's welcome."

This year has seen a spike in demand for books with a perspective on Covid-19 and health topics, and books about civics.

The organisation has also seen a big spike this year in corporates offering the service to staff to add to their diversity training following the death of US man George Floyd.

"So many companies... it's just been incredible to see how many huge organisations and brands are waking up and saying we've got to take this more seriously and we've got to do something. And often they'll find us."

And the pandemic has forced the organisation to consider ways to offer the service online.

The service isn't free yet, but Abergel says they try to keep it low cost, and he hopes one day it will be free.