When America Stopped Being Great is Bryant's latest book and follows on the heels of his 2014 title The Rise and Fall of Australia. 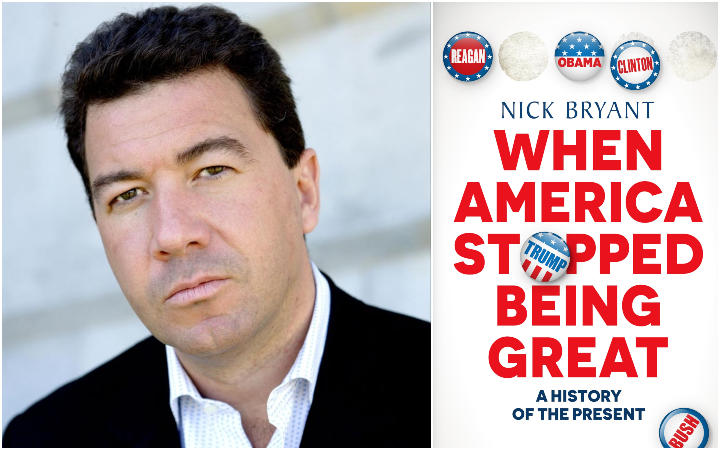 In it, Bryant argues that while the presidency of Donald Trump is commonly seen as an historical accident, by 2016 it had become almost inevitable.

"What the book charts is how we went from Reagan's Morning Again in America to Donald Trump's American carnage and also tragically the mass mourning that we've seen in America as a result of Covid-19," Bryant said.

"It was Reagan who really brought together the modern day conservative movement, he was the first president for instance to be endorsed by the National Rifle Association,  the NRA, this divorce, rather like Donald Trump, had an unusually close relationship with the evangelical movement.

"But he also changed the nature of the presidency, he made it more performative and I think he paved the way for somebody like Donald Trump who was this kind of performative president, who wasn't so interested in the back office as the front office."

A former actor, Reagan perceived the presidency as the great role of his lifetime, Bryant said.

Bryant said an emphasis on performance in the presidential debates has made it difficult for candidates without charisma or who are not "telegenic".

"It's almost as if we've turned them into an audition for the leading role rather than a job interview where we deal with substance."

He said debates tend to be judged on who can deliver the Reagan-like one liners and debates have become about entertainment rather than elucidation.

Bryant said race is still the angriest faultline in American politics and the key to understanding why the country is so divided.

He said race is also the reason that the Republicans became so dominant in presidential politics.

"From 1968 to 1992 when Bill Clinton beat George Herbert Walker Bush the Republicans only lost the presidency once to Jimmy Carter in 1976 and that was post Watergate."

He said the Republicans have done so well in presidential races by exploiting white concerns about black advance.

Journalists have enabled the Trump phenomenon

Bryant said there is a "better story bias" amongst campaign reporters.

A lot of campaign reporters write the narrative of the campaign that provides "maximum journalistic entertainment value".

"Let me give you an example, the year 2000 Al Gore got a terrible press partly because nobody wanted to cover a third term of a Clinton administration, which is essentially what Al Gore would've been, without the most charismatic protagonist Bill Clinton in the White House. The much better story was a Bush restoration, a son following his father into the presidency."

He said in 2008 the journalistic community decided the first black American president, Barack Obama, would make a better story than Hillary Clinton as the first female president.

"I think in the primary campaign, when they fought each other, Barack Obama did end up getting much better press."

He said the same thing happened in 2016 with Donald Trump, who came along at a time when there was a desolate media landscape.

"I think that was a classic case of better story bias, you know Donald Trump's candidacy would have far more journalistic entertainment value and his campaign was far more interesting for journalists, than that of Hillary Clinton."

Bryant said much of his book is about how the media missed the trendlines and saw Donald Trump as an "historical accident" when so many things that were happening in the US culminated in his candidacy.

When Trump said "the American dream is dead" millions of Americans agreed with him that the economy would not provide a better life for their children.

The Republican Party had become an anti-Obama party, "so it made perfect sense for them to go for the most virulently anti-Obama candidate," Bryant said.

And then technology put the powerful political weapons of Twitter and Facebook in the hands of Trump, he said.

Bryant argues that every single president from Reagan on has in some way contributed to Trump's rise.

Bryant said even if Trump is not president next year, Trumpism will not disappear because the things that led to his rise are still there.

Many people feel like economic castaways in a global economy that they have never been able to make a living from, he said.

Another big problem is race and there is no sign of healing in America.

There is such dysfunction on Capitol Hill that it is hard to see how the Democrats and Republicans can forge a consensus.

Bryant said a functioning democracy relies on an agreed set of facts which is problematic with the spread of disinformation and failure to agree on even basic facts.

Both Bryant and his wife contracted Covid-19 and at the time his wife was heavily pregnant.

"Covid became the concluding chapter to the book, that obviously I never wanted to write."

He said his wife gave birth to their third child in tumultuous circumstances.

Not only was there an economic crisis and a health crisis due to Covid-19, but the US had the greatest racial turbulence it's had since 1968, he said.

"And much of that racial turbulence, ironically, was playing out outside of our door, outside of our windows, we live very close to the Brooklyn Bridge and the Manhattan Bridge."

Their daughter was born on the third night of the New York curfew, although the midwife and her assistant did manage to get through to attend the home birth as essential workers, he said.

Bryant said he arrived in the US as a 16-year-old and has always adored the country and felt it had a sense of possibility and ambition.

But he said the birth of his daughter is causing him to feel conflicted about the US.

"Do I want America to become her long time home?"

"I worry about Honor growing up in a country where mass shootings are so common ... I do look at Washington and wonder how politicians are going to heal their differences, I look at race and I think that's an unbridgeable divide.

"I just can't see where this country comes together in a really meaningful and lasting way and that's why I worry."