For more than 50 years the presence of wild puma-like cats in the South Island has been a keenly debated topic, but a Twizel-based DOC officer remains sceptical. 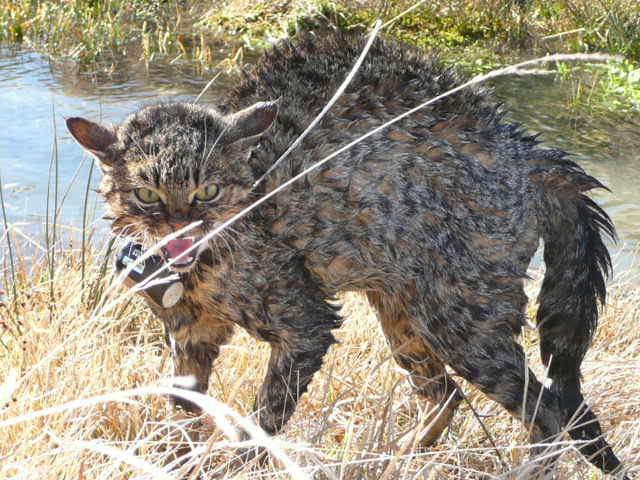 A wild cat with a GPS collar attached in order to track its movements. Photo: Supplied / DOC

Two sightings of "monstrous" cats earlier this month in North Canterbury have again reignited the mystery and speculation.

One possum hunter has vowed never to go into the bush alone again after encountering a cat that he estimated to be about 2 metres long, Stuff has reported. That would make it about the same size as a puma.

Over the years there have been sightings of big cats in Canterbury, Otago, Southland and Marlborough.

Last year, there were reports of a big black animal close to Fairlie.

If you have seen a larger than normal feral cat, and would like to share pictures or stories of your sighting with us, email RNZ at: webnews@rnz.co.nz

Department of Conservation biodiversity officer Dean Nelson has been based in Twizel for several years and is familiar with big cat sightings in the region.

He said he remains a bit sceptical, although that could change if he ever sees one himself.

"The issue for me is that the sightings have been in a whole lot of different places over many years and how do these animals remain concealed the rest of the time?"

Nelson said if big cats were there it would be likely to see more reports in one place, or signs of their presence such as sheep kills or the like.

A number of the sightings have been at times when there are low light levels or at night which can change a person's perception of size, he said.

"We know we catch just over 7kg feral cats, but that's not quite the size that some of these people are talking about."

Nelson said although he has caught large feral cats the only report he has had directly of a larger than normal cat was in the Aoraki/Mount Cook National Park in the 1980s.

"I had an American tourist who was convinced he'd seen a lynx, minus the tail, you know cause they don't have much of a tail - you know he was convinced that it was a lynx that he'd seen on one of the tracks."

Nelson said he deals with river areas where there is sand and big cats would leave paw prints, but he has never seen any evidence of that.

But he said wild cats are very good at avoiding humans and a good example of this is the number of cats DOC has been able to trap.

"People think there's a few feral cats out there, but in the Tasman Valley that we've been trapping for just over 15 years now, we've taken nearly 3500 cats out of there over that period."

Nelson said feral cats are New Zealand's top predator because they are incredibly adaptable hunters, can survive from eating just about anything and live in a huge range of habitats.

But he said if there were big cats out there it is likely that they would see cattle and sheep as easy food.

"I'm sure that we would hear it from the farmers if they were losing stock," he said.

Feral cats need to put on as much weight as they can during summer and autumn in order to survive cold winters, Nelson said.

Nelson said although it is possible for cats to breed between cat species, if for example something like a bobcat escaped from the zoo, this would be very unlikely.

"But there's not a lot that kind of indicates hybrids between big cats and small cats, and the other issue with hybridisation is that often a hybrid of a species is less fertile and is less likely to have viable offspring."