Covid-19: Why some men refuse to wear masks

How often throughout the pandemic have you seen a man walking down the street with a surgical masked pulled down so that it hugs his chin?

Several surveys have shown that men are less likely to wear a mask to curb Covid-19 transmission — but why is that?  Psychology professor James Mahalik from Boston College is part of a team that has researched the topic, and talked to Sunday Morning about what they found. 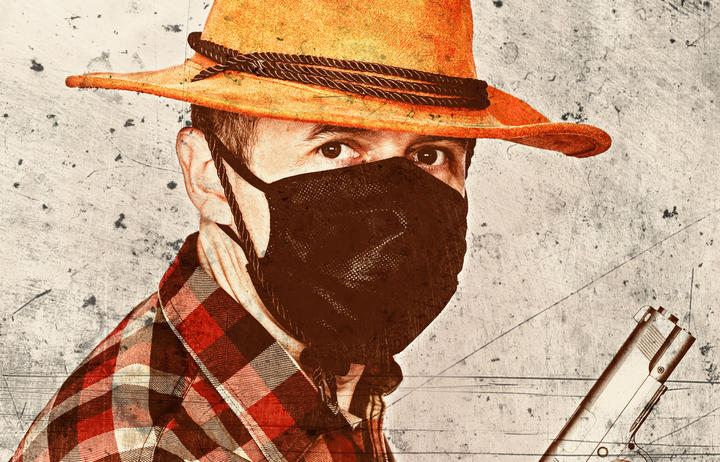 The issue has been clouded with man social and political factors in the US, he says.

"Men have been particularly mask reluctant — there were evangelical pastors that were making this about manhood somehow. A televangelist in Pittsburgh Pennsylvania at the end of March was talking about implementing health regulations like social distancing, and saying that somehow the people who are implementing this 'got neutered' somehow along the way and don't even realise it."

"We had that already, then we thought there may be some links to empathy and to confidence in science."

Looking at his study group's response overall, as an average the men surveyed did adopt mask wearing and agreed that they had confidence in science, but Mahalik says across the group there were more with negative reactions to mask wearing and science among the men than the women.

The combined results from the sample of men also placed them as 'only somewhat' agreeing to having empathy for people vulnerable to Covid-19. And those who were less likely to address health recommendations were more likely to have traditional masculine characteristics.

"I was really saddened in a way to see [men] having less empathy for people who are vulnerable, I thought that was really a disturbing finding. I'm always reluctant to characterise: 'men bad, women good', I don't think that's particularly helpful," he says.

"But if we think in terms of how do we tend to raise boys and men?: Little Johnny falls down, scrapes his knee, he starts crying, he's told 'big boys don't cry'. We tend to socialise boys and men to not be emotion-focused. And we also tend to socialise boys — at least in the US, about being more independent. There's nothing wrong with independence and self-reliance, but disconnected is different than that."

Mahalik says one school in psychology, called precarious manhood theory, says "manhood is a status that is hard to earn and easily lost, they see men as constantly vigilant against losing status.

"You have President Trump saying of Biden 'did you ever see a man that likes to wear a mask as much as him?' Trump's saying it probably gives him a sense of security, and in saying that and taking that public stance Trump's also saying something about how he sees himself and what's important in terms of being a man."

So how can public health advice better reach men? Mahalik says men respond especially well to messages that certain behaviours will lead to positive things for those who do them.

"It's a benefit to my health, to the health of the people I love, you want to open up the economy, get this cleared away and for jobs to come back?

"Explicitly connecting behaviours to benefits would be extremely important to do: science — we brought you people on the moon, the cell phone — reminding people of the benefits of science and having confidence in that; thank you for wearing a mask, thank you for social distancing because you're helping my grandma, you're helping my daughter who's immune deficient..."

Stay disciplined. Boost your immune system. Commit to wellness. Wear your mask. Protect your family. Be strict about having people over your house or gatherings. Stay positive. And care for your fellow human beings. Stay healthy, my friends. DJ #controlthecontrollables

Appeal to traditional men, you can appeal to their traditional views about being protectors of the community.

"Things like emotional control, self-reliance, dominance. If we reconstructed this, and presented a very traditional protector role, to be a guardian of others, to be a protector of individual health and larger societal well-being, that's a role that's very consistent with traditional norms."

Mahalik praised actor Dwayne 'The Rock' Johnson, for speaking out publicly about the deep affect Covid-19 has had on himself and his family when they contracted it. And he would like to see more public health messaging from role models that appeal to this group such as macho country singers or hyper-masculine rappers.