New Zealand entrepreneur Jenene Crossan became number 37 on the list of confirmed coronavirus cases in this country back in March, but is still suffering from associated health issues - not to mention 'hardcore internet trolls' - six months down the track. 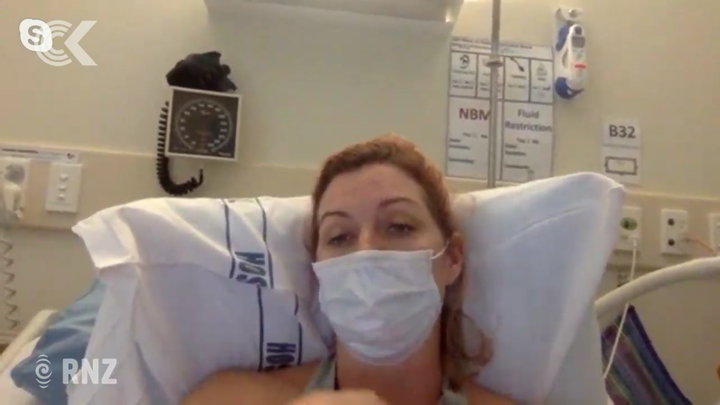 Jenene Crossan was hospitalised with Covid-19 in March. Photo: RNZ

Having previously lived in London, Crossan - chief executive of Powered by Flossie, a software system for hair and beauty businesses - believes she picked up the virus at a packed London Gatwick Airport as she made her way back to New Zealand via Doha.

Despite having no symptoms when she arrived back in Auckland, she had arranged to self-isolate at the family's bach in the Coromandel - which she described as a hut without power and running water.

Her symptoms started with a sore throat and led to a hacking cough and heavy chest, though she said she hadn't had a fever - 24 hours later, she tested positive for Covid-19.

However, despite her subsequent recovery and feeling like she had "bounced back", Crossan has since found herself going through a secondary relapse of symptoms related to her infection - but says she's "trying to bring a positive attitude to a very trying time".

Crossan previously suffered from inflammation issues relating to endometriosis, but had thought her hysterectomy last year had solved this problem.

"But ever since Covid, it's come back with a hiss and a roar," she says, describing feeling like her whole body has arthritis.

"When I get out of a chair, I look like an 85-year-old. I creak and my legs ache and internally, that inflammation is substantial, my body just rejects all kinds of different things going in it."

Despite having cysts removed from her ovaries only six weeks ago, they were already growing back.

"I hadn't necessarily connected the two together until I had surgery, and that trauma created a relapse. And that's what the data from scientists has shown us now is that the trauma creates a secondary relapse," she said.

However, there were no signs she was still infected with the coronavirus: "You're not contagious but it appears to trigger the cells that had been affected and it puts your body back into some kind of Covid relapse."

Her current tests showed that she had a negative antibody at this point - but she was still learning what that meant.

"What it does say, and I was warned of this, is that after six months of exposure you're unlikely to still have antibodies.

"And they hope that these antibodies in the first stage, that you develop after you've been infectious can help other people."

Crossan found ongoing support through Facebook groups - one internationally based one with thousands of members and another local one with only around 40 members.

"I can tell you, each person that joins it, they all have the same reaction which is a sense of relief that they don't feel alone and as isolated as they did before."

The social media site Twitter was also a source of support for her, despite the occasional troll.

"I'm going to shout out to the Twitterverse, they've been amazing," she said

"Maybe it's because I've got really good at the block button but I also appear to somehow have a couple of guardian angels on Twitter who have taken on some sort of crusade to keep me safe from the hardcore trolls."

Despite her health issues, Crossan was continuing to do business with her company in London - but despite understanding why others might want to get the economy started again, she urged caution.

"I believe that we should be working more with what we call a circular economy ... which should be where of course not just 1 percent thrives but all people are able to thrive.

"There's a long path and road ahead of us for everybody - and the economy is nothing without people."

While she hoped to feel better eventually, Crossan said: "in the back of my head, I'm a little bit scared that I won't be".

"I say this, possibly on the back of a hard week where ... I feel a little beaten and it is possible that there are things here that I might have just learn to live with for the rest of my life."