Kaipara author Steff Green discovered a way to live her dream despite a disability, so now she's helping others overcome their barriers. 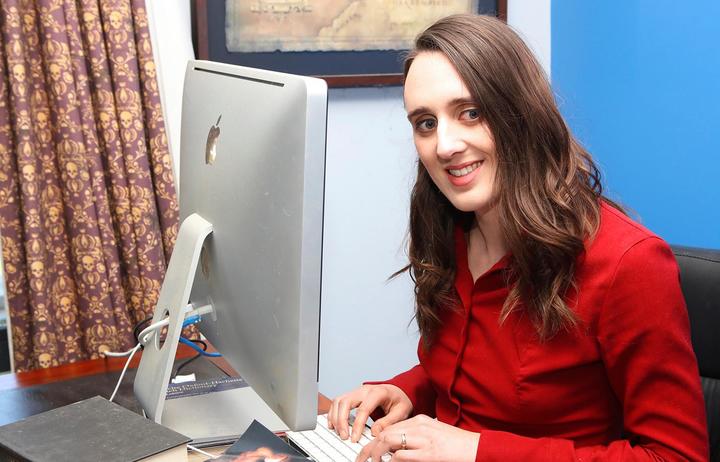 Steff Green says she turned to writing after struggling to gain employment as an archaeologist, because of her disability. Photo: Supplied

After growing up legally blind from a rare genetic condition, achromatopia, Green trained as an archaeologist.

However, she couldn't find anyone who would employ her in the field because of her poor eyesight.

"I couldn't find the courage inside of me at that time to stand up for my rights, so I turned to writing, which was something I had always done all through my childhood and teenage years," Green said.

"I realised it was this thing I could do and no-one could tell me I couldn't do it.

Using the pseudonym Steffanie Holmes, Green has now published more than 30 books in the paranormal, romance and fantasy genres. She said she earned about $200,000 in the past year.

Many of her books are self-published.

That means she keeps about 70 percent of the royalties, instead of the 10 percent she might receive through a publishing house.

She said self-published authors were taking over romance and fantasy publishing from where traditional publishers left off.

"About 35 to 40 percent of the best selling e-books online are self-published - which is enormous."

Most days, she starts writing at her home overlooking the Kaipara Harbour at about 7am and pumps out 4000 words, before calling it a day at about 4pm.

Her "very disciplined" approach to writing means she can publish a book every two months or so.

Having figured out how to make a generous living through her craft, she is now running an online course on self-publishing and offering scholarships to writers who need support to get their voices heard.

Green said she was fielding lots of questions about self-publishing, then the Black Lives Matter movement highlighted the barriers many writers face in getting published by commercial publishing houses.

"I can't solve all the world's problems, but I do have some knowledge about self-publishing and I felt like it was my job to do what I could to ease that barrier just a little bit," she said.

"There's this opportunity now for writers like me to have this really great life and to find readers who might not be able to be found through the traditional systems.

"I'm trying to help give people the tools to help their dreams come true."

While working on an archaeology site Green met her husband, James Moore, when she noticed he was wearing the same Iron Maiden t-shirt as her.

Finding Mr Right was not the only reward of her career that bottomed out.

"All of those years I spent studying and volunteering, they were absolutely not a waste - I pour all of that into my books."

She also finds creative material in her experiences of being bullied as a child.

"It's really cool to be able to take experiences you've had that were part of the wounds of you as a person and turn them into something that's positive and uplifting and enlightening for food for your readers, many of whom might have gone thorough the same things."

These days, she chooses to live off the electricity grid - apart from the Internet - in a house with plenty of cats, homemade mead, and a collection of medieval style swords.

Travel to places such as Romania and Egypt, which she has been "absolutely obsessed" with since childhood, fire up her imagination.

"I have no desire to go back to a day job and I feel like I'm never going to run out of stories to tell," she said.