'Bank of Mum and Dad' putting parents at risk

Young people are turning to the 'Bank of Mum and Dad' under pressure, research shows, but it can be damaging for their backers, an expert says. 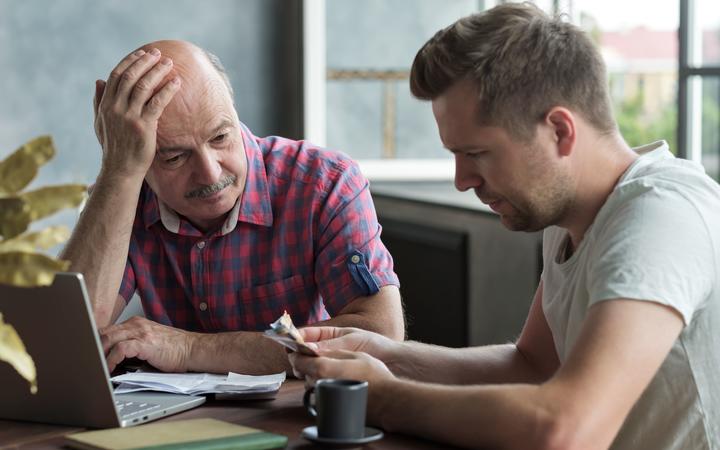 New evidence from researchers at the University of Copenhagen shows that, when short of cash, many young people, even up to age 39, turn to the Bank of Mum and Dad.

This extends to New Zealand and our housing market, with a 2018 report showing more than half of all first-home buyers purchased properties with the help of their parents. But this can be a damaging practice for those doing the lending.

And it's not just for home buying, in similar countries to New Zealand socially it's becoming an increasingly important form of social insurance.

He talked with RNZ's Sunday Morning about the Bank of Mum and Dad.

He says there are problems caused by both children and parents not thinking critically about whether giving or lending to the children is a good idea for the parents' own welfare. He also recommends extra caution in the post-Covid economy when it comes to deciding whether to buy a house.

"What really bothers me, is the expectation that children have that they can render their parents impecunious to further their own needs.

"The insidious bit of this is not all parents are as comfortably off as they think they are. Sometimes parents mortgage their own homes to provide money to their children.

"The younger generation is eyeing the accumulated wealth of the baby boomer population - which isn't universally held but there is a reasonable chunk of the baby boomers that are wealthy, and attempting to access it for one scheme or another. Whether it's a business or whether it's a house or an investment or something - there's increasing pressure on perceived-to-be-wealthy parents from their children."

He says it's human nature for the young to want the world without delay, and for parents to want to help them.

"Often parents will pretend they have more than they have for the other human nature, which is pride. Some parents take the view 'well my life's over, if I'm going to be broke in old age it makes no difference to me, I'd prefer my children to succeed and they'll look after me when I'm old' - that is a fatuous argument in a western society.

Expert unbiased advice, and a check on emotional decisions can be invaluable.

"Holding assets in trust is a break, it's a break on that behaviour.

"Having an outsider who can say 'no' if the children are putting their parents at risk makes it a lot easier to ensure that only those that can afford to do so, and that they do so with their eyes wide open to the risk they are putting themselves into in the future."

There are plenty of horror stories of children taking on second mortgages, running up credit cards flippantly or taking the money and disappearing out of their parents life, and where parents do choose to help their children out he recommends lending to them rather than gifting, to give some safeguards back to parents.

"Some parents just say here's a cheque go buy a house, that's easy. It's a gift, it doesn't count as debt, it counts as children's equity, and it makes the bank comfortable to lend.

"I generally say lend to both of them [in a couple] ... so if [the children's relationship] turns nasty you can issue a demand and pursue the spouse for the debt."

Before the Covid-19 lockdown banks were uneasy about parental loans, and weighed them into the Loan-to-Value debt equation when deciding if they would provide a mortgage. But that has changed.

"Post-Covid, banks are ignoring parental loans, so it makes it easier for the parents to document what they do as a formal loan.

"Many are choosing to do that, mostly interest free. Some are electing to do it by shared ownership, and the bank finances the children's proportion and the parent's finance the equity proportion - that's becoming a more common way. It gives the parents better control over subsequent borrowing on the property if the children choose to use it as security."

But the banks' looser post-Covid approach to parental loans isn't a reason to be more relaxed as a lender.

"The banks have taken the breaks off it, but of course the banks will still want a first and only registered mortgage. They're aware of the debt, but don't want it on the new property's title.

"The children own the property, [it means] the parents have an unsecured debt. And unsecured debt versus gift probably doesn't make much difference if the children go broke or run off with the money. The children remain free under that scenario to mortgage the property and spend up ... using the rising house value for consumption."

He recommends thinking carefully before lending money to children, and thinking critically about some of the social expectations.

"There is a generational divide, both culturally and economically, that has emerged I think in the past 30 years. Millennials have a particular set of aspirations around life, they're diverging quite rapidly mostly because of technology, speed of change etc, to the value sets and beliefs that their parents had. Many, for example, prefer entrepreneurship and business to owning homes."