New Zealanders continue to be heavily in favour of legalising euthanasia, where as they are divided over the question of whether to legalise recreational cannabis use, according to the latest survey from Research New Zealand. 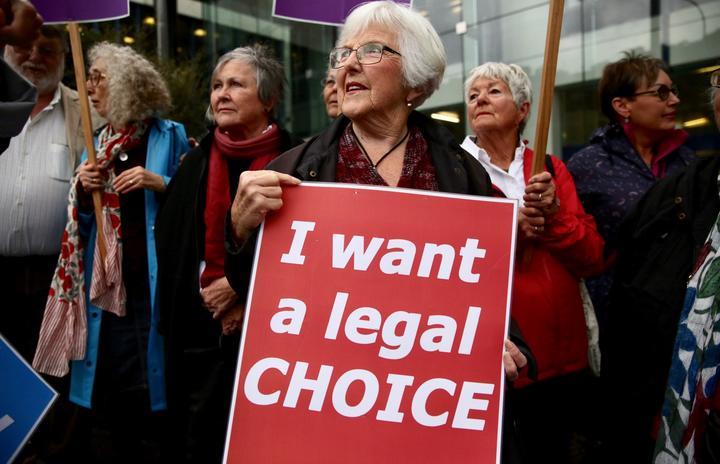 Euthanasia advocates stood outside the court during Susan Austen's sentencing on Friday, 11 May, 2018. Photo: RNZ/Richard Tindiller

In this year's general election people will be asked to vote on the two issues in referenda.

Research NZ managing partner Emanuel Kalafatelis said 52 percent of survey respondents said they had recently seen or heard information about legalising euthanasia, while 55 percent said they had thought about the issue and about a third had discussed it with their friends and family.

The respondents were then asked if it was election day today how they would vote in the referenda.

"We asked them whether they were in favour or not in favour of the legislation which allows terminally ill adults to request a medically assisted death," Kalafatelis said.

"Overall 64 percent, not quite two thirds were in favour, with 18 percent saying they were not in favour. Another 9 percent were sitting on the fence, 7 percent said they didn't know."

Kalafatelis said something dramatic would have to happen for that gap to close prior to the referendum.

Kalafatelis said the cannabis referendum is also on people's radar with 54 percent having seen or heard something about it recently.

He said people were asked the following question: "Are you in favour or not in favour of a government controlling by law how cannabis is grown, manufactured and sold in New Zealand for recreational use."

At the moment opinion is polarised Kalafatelis said, with 43 percent of respondents in favour of the legislation and 39 percent against it.

He said although there is a difference, it is not statistically significant.

These results do not show any major difference with the results from the cannabis poll taken six months ago, he said.

Kalafatelis said there is quite significant support for legalising cannabis among younger age group with the level of support at 57 percent amongst the 18 to 24 year olds.

He said another poll will on the two issues will be taken about 30 days before the election.