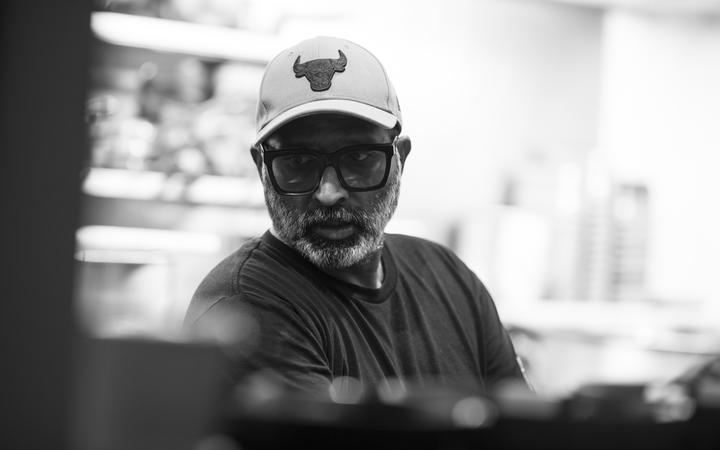 While gearing up for the second season of Eating Well For Less, co-host Ganesh Raj has been setting up a new YouTube channel called The Humble Yum Yum. The channel borrows from the ethos of EWFL, and shares ideas for global food that doesn't cost the world. Ganesh joins Jim in the studio to talk about his new venture and share a delicious winter warmer recipe.

In a pot deep enough to hold the pork shoulder, heat 1 tbl of oil to a high heat.

Salt the pork and fry on all sides so the outside caramelises. Once the pork is browned all around, remove and set aside.

Add 1 tbl of oil to the incredible mix of pork flavour in the pan. Fry the onions till golden brown. Add the cloves, peppercorns and star anise and fry for 2 mins

Then reduce the heat to a medium and add the garlic. Cook till all the vegetables are soft.

Put the pork back in the pot and rest it on the vegetables.

Pour enough water into the pot to cover the pot.

Put in the coriander stalks and the spring onions.

Pour in the soy and fish sauce and mix well.

Bring the pot to a boil. Then drop the temp to a simmer and cover. Leave a little gap for a little steam to exit.

Simmer for at least an hour and then start to remove the fat on the top from time to time.

Add the potatoes and watercress and simmer for another hour. Leave the lid open a little more. The secret here is to help the stew reduce but make sure there is enough liquid in the pot to make the stew.

Once the pork falls off the bone, take it out of the pot. Pull all the meat off the bone and put the meat back into the pot. If you are the cook, eat everything left on the bone like a caveman!

To finish, garnish with the fresh coriander and spring onions.

This is a vegetarian dish that can be made in one pan or pot - no blender needed.

In a pot of boiling water, cook the kumara till it's half done. You want it to remain firm enough to pan fry.

Heat 1 tbl of butter in a pan to a medium heat.

Fry the kumara until it takes on colour and is golden brown. Set aside.

Fry the onions, garlic, carrots, ginger and celery until soft. The onions need to have taken on some colour.

Put the kumara into the pan and fry for another 5 mins on high.

Put in the coriander stalks, pour in the soy and white pepper and mix well.

Pour 1.5L of water into the pot to cover the pot and boil. Boil hard!

Once its reached boiling point, simmer for an hour until the kumara is soft.

Once the soup has reduced and thickened, take the pot off the heat.

Let the soup cool for 5 mins and then mash any lumpy kumara. Leave it a little chunky.

Heat a pan to a medium temp. Put ½ tsp of butter into the pan.

Fry the leaks on a low to medium heat form a good 15 mins. This makes them crisp up and become super sweet. You will use this as a garnish at the end.

Mix the soft butter with the garlic power and ½ tsp of salt. Spread on both sides of each slice of toast and set aside.

Heat a pan till a medium temp. Pan fry the toast on both sides till golden brown.

Simmer for at least an hour and then start to remove the fat on the top from time to time.

Serve a portion of soup with the leek garnish and toast on top. Enjoy!