Nick Ashill plans to return to the spot in Ohio, USA, where a truck smashed into him, leaving him close to death. 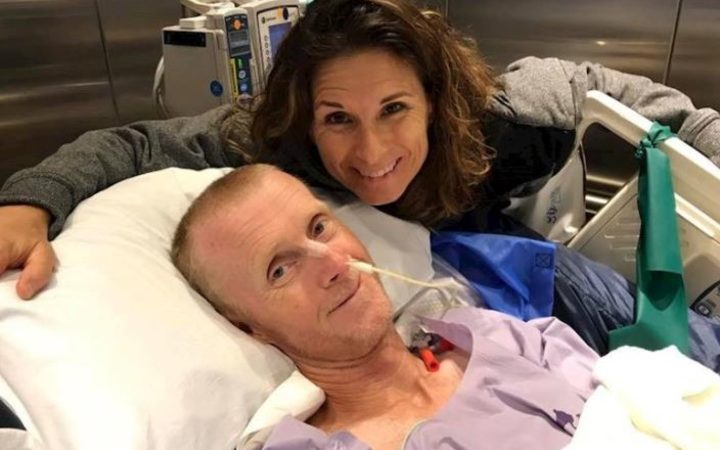 Nick Ashill says his life was saved by his wife, Sarah, who was on a hands-free cellphone call to him from Cyprus when the crash happened. Photo: Givealittle

The New Zealand ultra marathon runner was about 4000 km into a 5000 km run across the United States when a truck swerved over an almost empty highway onto the road shoulder, crashing into him.

The incident left him traumatised and with broken bones sticking out.

Doctors wondered if he would ever walk again, but Ashill is now determined to return to the scene to pick up his run where he left off nearly three years ago.

He said the fateful day, 2 August 2017, began normally enough, with him downing a protein shake before setting off to run his usual 50 to 55 km a day along Route 66.

At about 8.10am near a small town called West Jefferson, he watched a pick-up truck change lanes until it was unnervingly close.

"I knew I was in danger of being hit, so I made the decision to jump over a small metal railing... which I'm glad I did, but I didn't jump far enough or quickly enough and and I got slammed on my right side and thrown into a ditch."

His hopes that the truck might stop quickly faded and he was left, lying injured in a ditch, out of sight from the road.

Luckily, he had been using ear plugs to have a Skype call with his wife, who was about 9000 km away in Cyprus, and their daughters at the time.

His mobile phone was still working when the truck mowed him down.

"My wife and daughters heard the screams."

His wife Sarah Ashill has a nursing background and kept him conscious by talking to him for about 35 minutes, until his cell phone battery died.

"With her experience and her phenomenal bravery, she was able to inform the State Troopers in America and obviously the support crew, which were about 20 kilometres away from me.

"I was found by the State Troopers around 50 to 55 minutes later." 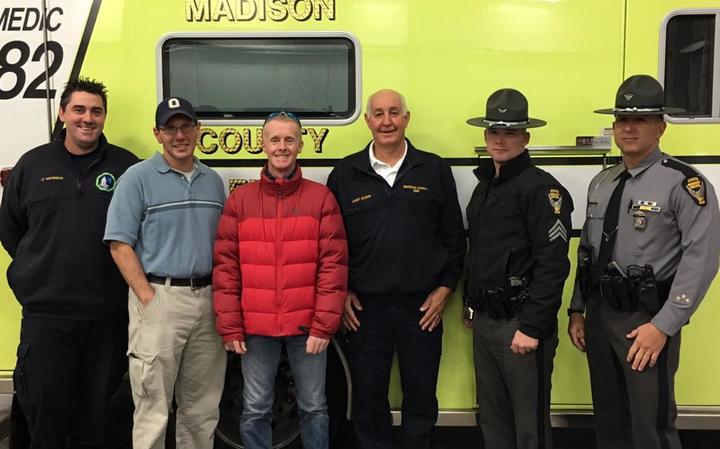 Nick Ashill with state troopers and emergency service members in 2017, after he was struck by a ute in Ohio. Photo: Supplied

Ashill was in shock and felt little pain at first, despite a broken leg and smashed pelvis.

"I tried to crawl out of the ditch around 30 to 35 minutes later, after the phone died, thinking the only way I'm going to get out of here is to get visible at the side of the road... but I was unable to move."

His long, slow journey to recovery included fighting secondary infections and having his wife sign a form agreeing that his left leg could be amputated - a surgery that was thankfully not necessary.

Ashill said he had plenty of time to wonder if the truck hit him on purpose - but he will never know for certain.

He spent about six months learning to walk again and another 16 months recovering his ability to run.

Doctors and physiotherapists helped, but he said the determination to run again came from within.

"The only way to climb out and get back to some form of normality is you.

"It's been a huge emotional roller coaster over the last couple of years, working through some of the bigger demons that have resided in my head."

The Covid-19 pandemic foiled his plan to return to the US last month to finish the last 922 km of the run, which he originally started in the hope of raising money for the Pulmonary Fibrosis Trust.

"The real catalyst was two things - one was to push myself mentally and physically, and the second thing - as a result of the death of my mother in 2015, I wanted to embark on a journey to raise awareness of a horrible disease of the lungs known as pulmonary fibrosis."

A professor of marketing, Ashill has lived in the United Arab Emirates for about 10 years, but he is now back visiting friends and family in New Zealand and plans to move back permanently.

In 2021, he hopes three of the doctors who helped him recover after the hit and run will be at the start line in Ohio to watch him finish the run he started all those years ago.

He said research ideas often came to him while running and he didn't plan to stop anytime soon.

"Running is very much part of who I am."