The writer of a new mini-series about TV game show Who Wants To Be A Millionaire? - where 'coughing Major' Charles Ingram, his wife, and an accomplice were found guilty of cheating their way to a million pounds - says it is an extraordinary story featuring a very ordinary couple.

James Graham is the writer of the mini-series about the 2001 saga which is about to premiere on SoHo in New Zealand. 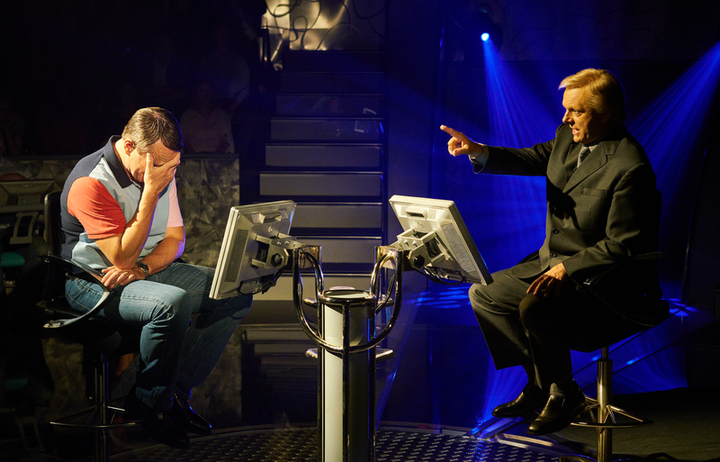 A screen shot from the new mini series, The Quiz. Photo: Supplied

The episode of Who Wants to be a Millionaire? never made it to air, although it can now be viewed on YouTube.

Subsequently Charles Ingram, his wife Diana Ingram, and college lecturer Tecwen Whittock were all found guilty of conspiring to cheat the show.

Charles Ingram, who had reached the £1m prize, was guided to correct answers with the help of deliberately timed coughs from Whittock.

Ingram's wife, who was in the audience during the episode and who had previously competed and won £32,000 on the quiz show, was found guilty of helping "set up" the scam.

Mini-series writer James Graham said he was captivated by the game show Who Wants To Be A Millionaire? as a teenager.

"This particular story of an alleged heist of a million pounds from a very polite, middle class, professional English couple, it just made for television drama. It's an extraordinary story that features a very very ordinary couple who get so fixated on a particular obsession in a game show."

"We're not trying to convince people that this couple are innocent or guilty, we're just trying to raise questions about whether or not our perception of this story has been manipulated, or how we can be manipulated by forces outside of ourselves."

It was also fascinating to explore the culture of "quiz obsessives", he said.

"This story completely encapsulated a whole swathe of very middle class, English professionals who were so obsessed by Who Wants To Be A Millionaire? that they started forming organisations to try and hack into the show, and it's just a gift for a writer, that sort of story is just a complete gift."

This episode of Who Wants To Be A Millionaire? did not just inspire this mini-series - Graham has already produced a stage play on the saga, and it has also inspired the book Bad Show: The Quiz, the Cough, the Millionaire Major which suggested the Ingrams were innocent.

While the Ingrams' defence counsel in court argued that ITV had only magnified strategic audience coughs out of 192 in all.

Graham said it is not the responsibility of television drama to overturn court verdicts.

"But I do think it's the responsibility of drama to humanise characters and people that have been demonised and made to feel really unsympathetic ... whether or not the Ingrams cheated on this game show ... I think it's really valid to say that the level of punishment they received in terms of the Major being decommissioned from the Army and in terms of the scrutiny and the humiliation that they received in terms of the tabloid newspapers and people mocking them in the street and attacking them in the street, I think that was probably disproportionate."

Drama can remind people these are human beings, whether or not they did it, and even if the Ingrams are guilty as charged, the reaction out of proportion, Graham said.

He said it all unfolded as the 24-hour news cycle was beginning to emerge and people were looking for heroes and villains.

Despite initially being totally convinced of their guilt, Graham said he now thinks it is not that cut and dry.

He said he met the real Charles Ingram as part of his research for the series.

"Yes he's an English eccentric, he bumbles, he has middle class kind of affectations where he seems that he isn't really connected with the world and yet you forget he's got a degree. And we discovered that during the trial, he actually applied himself to be accepted into Mensa which means he's in the top 2 percent of IQ in the country, and he was accepted."

Graham said the series explores the reasons for Ingram's behaviour, which included the fact he wanted to be a contestant who was entertaining and who stayed in the chair for as long as possible.

That may go some way to explaining how he played the quiz show, Graham said.

"We can't know with any reasonable doubt that he didn't know the answer to those questions, even though he behaved strangely."

Quiz will premiere on Sky SoHo at 8.30pm on Thursday 25 June, and then will available on demand on Lightbox​.