The future of air travel will likely be very different to the pre-Covid-19 world, but it probably won't come at discounted prices, a spokesman for a global flight-tracking service says. 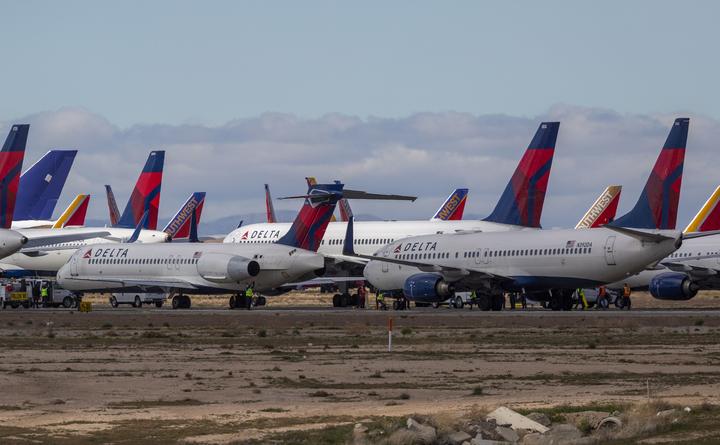 Flightradar24 spokesperson Ian Petchenik said there will be "major changes" to the future of air travel, which won't return to any sense of normalcy until people feel safe.

Most flights were cargo, while passenger planes have been parked "wherever there is space".

Many have been parked in dedicated storage facilities known as "boneyards", Air Canada was flying up to five retired planes at a time to the Arizona desert, while Chicago's O'Hare International Airport had been turned into a "glorified parking lot".

The Covid-19 crisis had accelerated the retirement of many aircraft, but Petchenik predicted the 747 would make a comeback, but the 757 and 767 were "endangered species".

There was a lot of uncertainty about the future of the airline industry, he said.

"What routes will come back, what routes won't. Will the aircraft that we fly on change? Obviously development of an aircraft takes a decade or so, but do we scrap all future development at this point and move forward with a different kind of airplane?"

While there were a lot of questions, there would be no resolution for a long time, he said.

"I think there are going to be major changes that we certainly haven't foreseen at this point and are beginning to grapple with, but I think the big question as far as travel and tourism are concerned, are that people won't travel until they feel safe to do so.

"Getting on an aircraft, walking through the airport, going to a hotel, when people feel safe doing that, however that ends up happening, I think that's when [airlines] start to see things really pick up."

Aviation data firm OAG is predicting the normal volume of fliers might not recover until 2022 or 2023.

Will there be discounted airfares when that time comes? Petchenik doesn't think so.

Airlines are struggling amid the crisis, and while he didn't think any major airline would close, Petchenik said low cost carriers would have particular challenges, especially if they fly without full planes.

"I think pricing is going to be very interesting, but I don't think we're going to necessarily see a lot of discounted fares."