Kiwi-born Welsh poet Tomos Roberts (aka Probably Tomfoolery) has captured the imagination of millions of people around the world with his video The Great Realisation.

The fairytale-esque poem details the grim realities of pre-Covid life, such as pollution and over-consumption, before imagining a brighter future once the pandemic is over.

Since being posted last week, the video has been viewed more than 30 million times across all platforms, and garnered attention from A-list celebrities including Jake Gyllenhaal, Jennifer Aniston and Drew Barrymore.

Roberts told Jim Mora on Sunday Morning that he was currently staying off social media because the response had been so overwhelming.

But he said he would check people's comments at some point when things have calmed down.

"I feel so grateful to people for taking the time to send them, I feel like the least I can do is try and read them, as I say I'm trying to wait for the right moment."

Roberts said before the lockdown he was working as a filmmaker, mainly filming and editing videos for corporate clients for advertisements.

When the coronavirus hit that work dried up and Roberts said he began homeschooling his younger brother and sister as his parents and older sister were working in UK hospitals.

He said that gave him more free time.

"I would write these poems as reflections of how I was feeling in the moment, and then we would make little games of trying to find out which part of the house we could film them in." 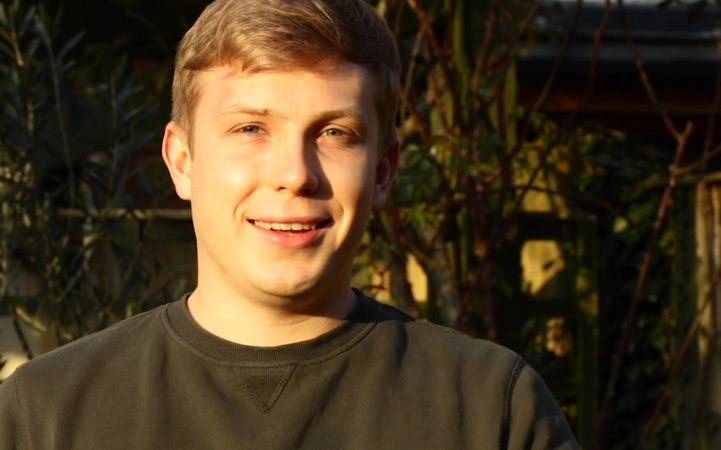 Roberts said The Great Realisation was filmed in the bedroom of his 7-year-old siblings by candlelight.

"What you cannot see just out of shot is a baking tray, which was my attempt at health and safety, with 12 candles inside, which had to be burning very close to my face in order to light my face, which made me incredibly hot - and I've got to say an onlooker would have called me incredibly foolish - but I ploughed on."

Roberts said actor Jake Gyllenhaal has asked if he could turn the poem into a children's book, but nothing has been confirmed yet.

He said the poem has already been translated into a number of languages such as Arabic and Japanese.

"It's really quite mind-blowing to think that somebody else would take the time to do that which makes it accessible to whole other regions and whole other groups of people.

"What it is I think is a lot of people subscribing to the same idea, which is one that an optimistic outlook could be a really useful strategy right now."

It's very serious and coronavirus will effect a lot of people physically and doctors and scientists are working incredibly hard to try and combat that, Robertson said.

But it was also important to have artists, musicians, dancers and other creative people to look after the world's mental well-being, as aspect which has been neglected in the UK, he said.

Robertson said the moment of disruption caused by a global pandemic can be viewed as a chance to re-evaluate allowing people the possibility of making changes going forward.

World has 'wicked sense of humour'

Roberts said the world has a wicked sense of humour.

The last gathering Roberts went to before coronavirus hit was for a read through of a script he has written called Blaguers, "which is the story of a spoken word poet that becomes a sensation overnight".

He said he's still very interested in directing and poetry and even in lockdown there can be opportunities.

"This poem that I made, yes one could say I had my own equipment already but everyone these days has an iPhone it seems which is capable of video and sound recording.

"You know this poem was made in my bedroom, with only the things I had available to me and a budget of nil and it's been able to move this idea all around the globe."

He said sometimes when you find yourself constrained it can benefit your natural innate creativity.

Roberts said he has two Welsh parents who were backpacking across New Zealand and liked it so much that they decided to stay for a few years during which time he and his sister were born.

"Then they came back to London and raised us and so I hadn't been to New Zealand since I was a baby and then when I was 18 I spent six months wandering around from top to bottom and had an excellent time."

But he said his Kiwi and Australian friends in London don't believe his link with this country.

"I say 'I'm a Kiwi as well' and they say 'No you're not mate, you sound like a Brit' and you know I wave my little black passport but it doesn't convince them of anything."