Kiwi comedian Rhys Darby has been doing his bit to keep people smiling during the Covid-19 lockdown with his comedy web series The Alone Rangers.

He and his wife Rosie, fellow New Zealand comedian Jonno Roberts, who'd been performing on Broadway before the theatres shut down, and director Dean Cornish decided heading home from Los Angeles to New Zealand was a smart idea. 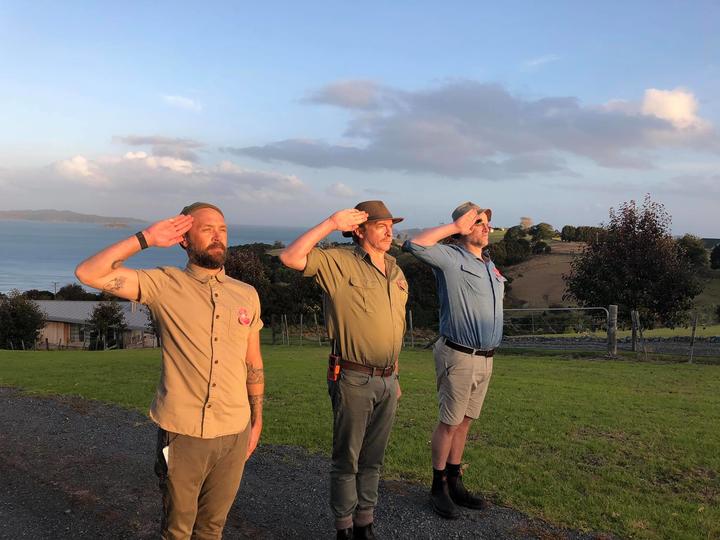 Darby and his family, who have been based in LA for a number of years, figured they’d be better off at his rural property north of Auckland when the pandemic started to take hold in the US, he says.

Darby and friends were joined by Jamie Bowen in their ten-strong bubble in Matakana where they have created the web series fronted by Darby’s Bill Napier character.

Bill is joined by arch rival Aussie Ron Bradman, played by Roberts, and trainee ranger Jason played by Bowen on the ‘chat show’.

“I had this character for quite a few years, the Bill Napier ranger character. He actually used to open for me when I did my national tours.

“He obviously pays homage to Fred Dagg and I’ve always wanted to be a ranger, my brother in law is a ranger and I love animals and I love trees and birds and that’s a real big fixture in New Zealand so it kind of made sense to me.”

Darby makes a speciality of playing authority figures, especially ones that are “clueless,” he told Emile Donovan.

The Ron Bradman character goes back too, he and Roberts having played the two trans-Tasman rivals in comedy shows in LA.

“I had this idea in the back of my head, wouldn’t it be great to do a rural chat show, he could host a show - because we love Country Calendar here.

“I had this in the back of my mind and it’s almost as if the universe provided the entire thing for me. Without anything else to do, any other work I was doing was cut short apart from writing, so I thought well now’s the time.”

The whole bubble is pitching in to make the programmes, Darby says.

Darby writes each episode on the weekend, they do a table read, shoot it then start the editing process. Having the talent and equipment in the bubble makes it all possible, he says.

They have cameras at the property and editing equipment, hence the slick production values.

So far the bubble has been harmonious and productive, Darby says.

“It’s like the Young Ones except obviously we’re the middle-aged ones.”

“We cook as a group and we have themed nights. We have pizza Sunday, taco Tuesday, stew Wednesday and do it yourself Thursday.”

The show is a hark back to a simpler New Zealand, Darby says.

“That’s one of things I like about what we’re doing right now, we’re having to hark back because no tourists are coming in. Life has changed and ‘We Don’t Know How Lucky We Are’ John Clarke’s song back in the day, that resonates right now because we’re forced to realise how lucky we are.

“We have this country, we’re trapped in it, but we’re going to eradicate this disease and we’re going to go back to actually doing our own tourism of the place. Don’t forget what we have, and I hope that this show helps to promote that idea too.”