Sam Neill says being "stupid and ridiculous on social media" isn't a new thing for him.

While he'd rather be on his farm in New Zealand, for now, the Kiwi actor is self-isolating in Australia.

In lockdown, he's keeping himself – and people around the world – entertained with songs, readings, experimental films and conversations with a garden gnome. 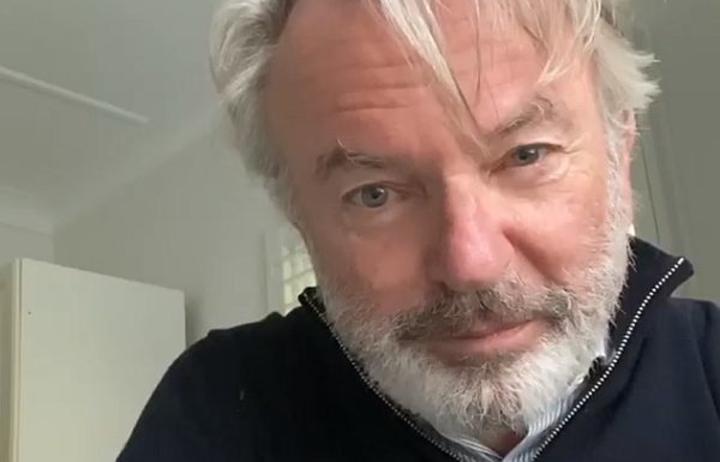 Sam tells Jim Mora that he ended up in Australia after unexpectedly leaving Morocco when the Jurassic World: Dominion shoot was cancelled due to Covid-19.

"While half of me wants to be at work the other half of me is perfectly content doing what we all should be doing, which is just staying away from other people."

Playing music is something he enjoys but doesn't usually get round to, but in recent weeks Sam has revealed his singing and ukulele-playing talent via covers of Radiohead's 'Creep', Marianne Faithfull's 'The Ballad of Lucy Jordan' and Bill Withers' 'Lean on Me'.

One thing Sam isn't doing with his days is watching a whole lot of news – he stopped that two weeks ago and the weight came off his shoulders, he says.

He encourages people in lockdown to look out for each other's mental wellbeing at this time.

"Human contact is everything. We are social beings. These devices and [technologies] are incredible in the time of self-isolation, they really are."

Although New Zealand's new self-quarantine restrictions mean it's not the right time for Same to come home yet, he thinks our country's commitment to fighting coronavirus is fantastic.

"New Zealand is a sort of beacon of hope for the world right now because we can see isolation actually works and that's extraordinary. I applaud every New Zealander who's staying home this weekend. It's very, very valuable."