Whitesnake singer David Coverdale: 'There's not a misogynist bone in my body'

Leather of lung, tight of trouser and luxuriant of mane, David Coverdale was among hard rock’s most successful front men of the 1970s and 1980s.

He replaced Ian Gillan in British hard rockers Deep Purple before forming his own band Whitesnake, which went on to have considerable commercial success in the 1980s with big-selling singles 'Here I go Again' and 'Fool For Your Loving'. 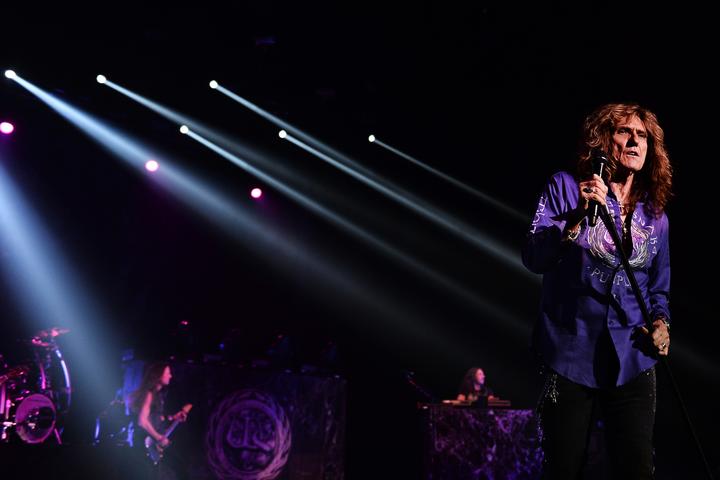 Coverdale returns to New Zealand this week with Whitesnake (who still play to sell-out crowds the world over) on a double bill with German band The Scorpions.

When Jim Mora talked to him he found Coverdale talking from the foothills of the Sierra Nevada mountains blanketed in snow where he says his garden is often visited by beers and deer. A peaceful, bucolic retreat for a man who has been playing it loud and heavy since the early 1970s.

His hearing, he says, has taken a hammering over the years.

“I’ve lost in on ear I think 60 percent and forty percent in the other. It’s a really a blessing for the younger artists and new artists because they’ve developed in-ear monitors which they never had when I started.

“I mean you’ve got to remember I was working with guitar players like Richie Blackmore or Jimmy Page. Jimmy Page was without a doubt, hands down, the loudest guitarist I’ve ever played with on stage.”

Coverdale’s career has not been without its spats and controversies. Whitesnake, which he formed in 1978, has had almost 40 members over the years. And he has fallen out with the likes of Blackmore (Deep Purple, Rainbow) and Robert Plant of Led Zeppelin.

“It was so disappointing because I actually knew Robert and Bonzo (John Bonham) the drummer more than Jonesy (John Paul Jones) or Jimmy. I’d met Jimmy a few times. It was particularly disappointing when Robert suddenly decided that I was on the shit list, it was very strange. Because we’re both from a similar school of influences and inspirations and singers.

“In fact I can tell you precisely who Robert listened to to develop the voice he has, which is Stevie Marriott and Terry Reid and that screaming blues voice isn’t copyrighted by Robert and that’s something that I’ve grown up doing too.”

Coverdale says he hopes the feud can be resolved.

“We’ve sent regards back, we owe each other a whisky.”

Coverdale was working in a men’s fashion shop in the early ‘70s when he was approached to replace Ian Gillan as the lead singer for Deep Purple.

“I timed it perfectly to get the job with Deep Purple because they were gravitating from theatres to arenas, they were a really successful band but when I joined on the highpoint of sales with Machine Head and Made in Japan that was an incredible benefit and the first record I wrote with Richie Blackmore, Burn, that was number 1 on both sides of the Atlantic. So, we were off to a good start.”

After parting ways with Deep Purple, Coverdale formed Whitesnake. The band took off, but Coverdale wasn’t exactly a media darling.

“Whitesnake just got more and more successful. Initially, we started off with very successful critiques and reviews and then suddenly it started to turn nasty, very quickly actually, I was called sexist and all this and I’m still here, as Elton John would say I’m Still Standing after all these years. It’s a testament to me to ignore the critics.

“But I do embrace good reviews!”

Coverdale is dismissive of suggestions he is sexist – Whitesnake album titles made enthusiastic use of the single entendre and the band’s name itself is reputedly not wholly related to matters reptilian. Yet Coverdale says the band still attracts a mixed audience.

“I’ve got to tell you when I’m performing I’m seeing a very, very significant proportion of women who I think get the fact that there’s not a misogynist bone in my body. We have a very healthy balance of women in the audience.

"My support of women, I have women working with me on the road I’m an equal opportunity guy without a doubt and always have been. I’ve worked with women for the last 40 years without any problems at all.”

The Rock God energy gets left at the door, he says.

“If I walk in the house with my onstage energy my wife would go ‘outside and get rid of that energy right now’.

"When I saw Hendrix, I was 15-years old-and he looked 20 feet tall to me, as you make that transition from backstage to the stage you suddenly become bigger.

“And then the moment I’m done, I’m in the car going back to the hotel I start pulling my energy back in to be … you know I don’t want to walk around with all that kind of stuff.”

Coverdale sees no reason to stop performing, he has two brand new titanium knees, and says he still gets a kick out of it.

“It’s absolutely fulfilling to me, it fills me up head to toe, shoulder to fingertip. It’s just a gift that keeps on giving, it keeps me young, youthful and energised. And I feel I’m one of the luckiest bastards I know. “