Beer can helps reunite woman with her dog after three years

When Monica Mathis' dog Hazel disappeared from her yard in Minnesota 2017 she tried everything to find her beloved pet again, but to no avail.

Hazel, who Mathis says is “short and stocky”, is a seven-year-old pitbull-mix – a blue nose pitbull, a red nose pitbull and a bull terrier. 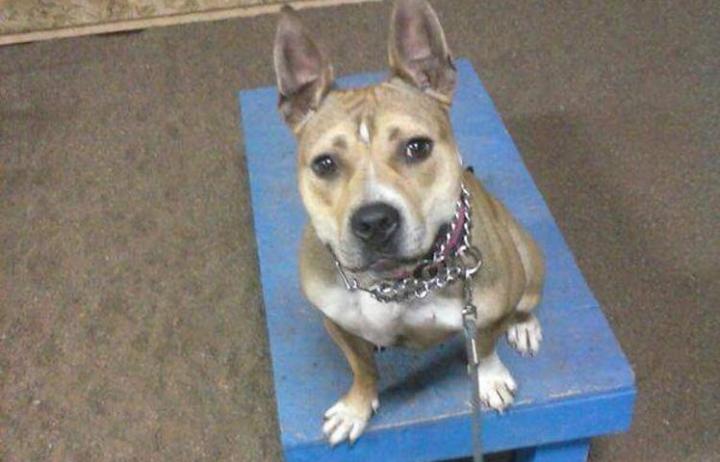 Hazel the Dog was reunited with owner Monica Mathis after three years and a journey that spanned more than 1000 miles. Photo: Monica Mathis

Mathis isn’t sure if she was stolen or if she took off and someone picked her up but eventually, Hazel ended up in a pound, 1000 miles from home.

“I assume somebody took her down to Florida.”

The pound tried to find Mathis, but because her microchip information wasn’t up-to-date, they had no luck.

But, three years later, Mathis was scrolling through her Facebook timeline when she came across an ad for a beer company. There she was – Hazel’s face was on the side of a beer can.

Motorworks Brewing Company had partnered with a shelter to help find homes for dogs by putting their faces on cans of beer.

Hazel was a last-minute addition to the beer cans.

“I called the shelter right away,” says Mathis.

“…words cannot explain, your heart starts beating, for it to be her was just amazing and the relief that fear and that worry about your pet, your loved one, that it’s gone, there’s no words to explain that feeling, it’s amazing.”

Of course, Mathis had to prove Hazel was hers but after she sent photos and paperwork, the shelter was able to confirm ownership.

Hazel’s now on her way home and Mathis has planned a reunion for the homecoming.

“[We will] give her a lot of love and attention. We’ll probably take her for a walk and play with a bunch of toys, we got new toys and things here at the house because we haven’t had a dog since Hazel, so I had to get all new stuff for her.

“It’s like winning the lottery or Christmas morning, it’s the best feeling.”