For the second time in four years, the iconic green cardigan worn by Kurt Cobain during Nirvana's MTV Unplugged concert will head to the auction block later this month.

It’s expected it could rake in $US200,000 ($NZ317,000), but Julien's Auctions executive director Martin Nolan told Sunday Morning that’s a conservative amount and he estimated it could reach as high as $500,000.

“That’s a fantastic piece of our pop culture history, Kurt Cobain is still beloved worldwide, his popularity grows year after year,” he says. “That performance in November 1993 was so historic, so ground-breaking, so changing for the Gen X people that were looking for something new and somebody to hold up as their hero, so this is a really great piece.”

Buying items belonging to iconic artists keeps their legacy alive for the fans, he says.

And this particular Cobain memorabilia doesn’t just hold precious memories for his fans, but pretty much his DNA too – it’s not been washed and still contains the cigarette burns from the singer.

But fear not, it’s been cared for by the current owner, Nolan says, with it being stored in acid free tissue paper and lying flat in a drawer.

Although some collectors go to even greater lengths, like the former owner of Marylin Monroe’s iconic dress, which she wore when she famously sang to President John F. Kennedy in 1962. Nolan says that owner, who bought the dress for $1.25 million, had a mannequin specially made, and kept it in a case, with controlled air conditioning and lighting – until it was sold two years ago for $4.81 million.

Meanwhile the current owner Cobain’s cardigan is also expected to have his investment pay off, having bought it for $137,500 in 2015. 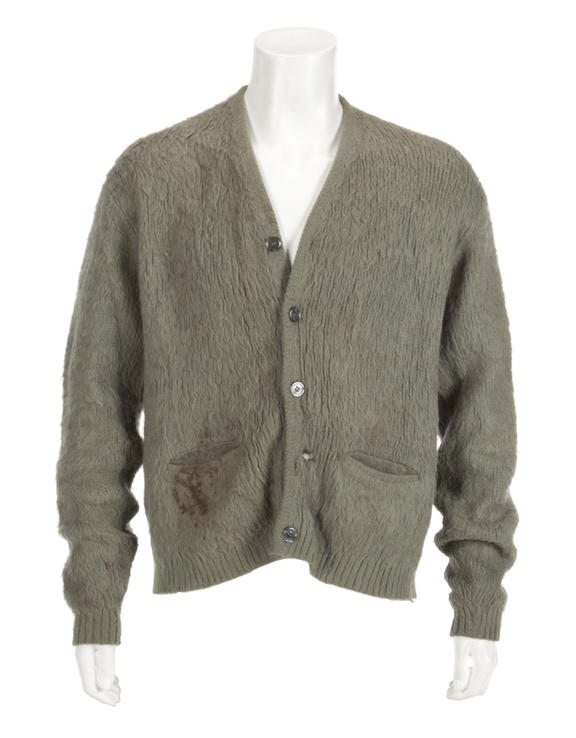 “We have so much more interest, museums of course want to own something as iconic as this, because Cobain is so collectable, and you have something like this in a museum that will drive traffic, people will actually show up,” Nolsan says.

“The Monets, the Picassos, and all that are great, they sell for millions of dollars, [but] people can’t really relate to those, the general public relate to something as iconic as this sweater cardigan.”

Also up for auction is Cobain’s custom-made left-handed Fender Mustang guitar, accompanied by a handwritten letter from his wife Courtney Love, noting that it was “one of his favourite guitars”. The guitar was also on exhibit at the Rock & Roll Hall Of Fame in 2002-2011.

Nolan estimates the price for this could reach anywhere between $300,000 to half a million.

Julien's Auctions Icons and Idols auction catalogue includes about 700 items from a range of artists including Michael Jackson, The Beatles, Madonna, Queen, Bob Dylan, and Elvis Presley. And it’s not just clothing and instruments either, Nolan says there’s even motorcycles, cars and hand-written lyrics up for auction.

Despite controversies and allegations surrounding Michael Jackson in recent years, Nolan says memorabilia from the singer sold at an auction earlier this year did just as well as three years ago.

Julien's Auctions don’t acquire the items up for auction, but are given to them on consignment and they take a commission, and work directly with the artists and their families as well as investors or collectors. They also exhibit the items worldwide and tour.

Nolan says he was recently in Australia with Olivia Newton John to showcase outfits from the Grease movie, that’ll be up for auction.

One of the most expensive piece of memobralia that they sold was John Lennon’s guitar, which was lost for decades prior and had been used to write many of The Beatles hit songs.

It went missing from Lennon in 1963 in the United Kingdom and later showed up in San Diego in 2014, whereby Julien's Auctions spent a year trying to authenticate the instrument and even had to involve Yoko Ono. She agreed to the sale with half of the proceeds going to the owner who had it for many years and the other half to the charity Lennon and Ono had set up.

Another remarkable piece from The Beatles was the skin of the drum kit from when the band first came to America and performed in 1964 at the Ed Sullivan show – it sold for $2.2 million.