In 1930, Oscar Garden taxied his tiny Gypsy Moth across London’s Croydon Aerodome and waved out to the only person there to farewell him before taking off.

He planned to fly to Australia but with only 38 flying hours under his belt, some say the plan was sheer madness. Only a handful of people had made the trip before him.

His daughter, Mary Garden feels history has overlooked her pioneering pilot father and she's written a book about his aviation achievements, Sundowner of the Skies, which she hopes will help him to have his rightful place in flying history. 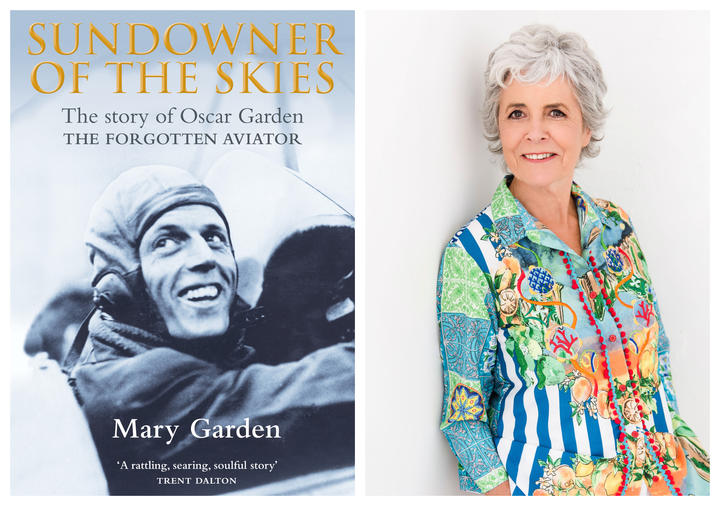 Garden was born in Scotland but ended up in New Zealand in his 20s working for his father's cordial and bottling business, after a stint in Australia he was heading back to England in the 1930s, unsure of what to do with himself, when a fellow passenger suggested he learn to fly.

Once Garden had got his solo flying licence he thought it would be cheaper and easier to rack up the hours needed for a commercial licence if he bought a second-hand plane and completed the rest of his hours all in one go, says Mary.

His second-hand plane had belonged to the owner of a department store and he paid 450 pounds and traded in his car for it. He called his plane Kia Ora and painted it silver for luck – he knew he needed it, Mary says.

On one of his training flights, his wing tip just missed Edinburgh Castle.

“He had very little money left but he strapped a propeller to the side and took two valves and two valve springs as spares. It’s very hard for us to imagine what it was like, these early aviators in those little planes, no radio, no navigation aide, the compass, there was an open cockpit, so you’re exposed to the weather, hugely dangerous flight.”

When he would land for a break and refuel in countries like India, he would sleep under the wing, and did his own maintenance. In fact, in India he crash-landed under the cover of darkness following an 11-hour flight.

One of the locals gave him a massage, others gave him cigarettes, says Mary.

Garden successfully made it to Australia, although with no one there to greet him his success was not known until a motorist spread the news in town.

And he wanted to fly on to New Zealand, but his plane didn’t have the range to fly over the Tasman, says Mary.

“The way he did it was quite extraordinary, and he was like the unknown aviator, very low key and he didn’t like the attention.”

Mary says he has himself to blame, in part, for not being so more widely known. “There was no dramas and he was low-key, he wasn’t flamboyant, he hated the publicity like the other aviators.”

He was relatively famous in the 1930s though, says Mary, but he cut himself off from the aviation world when he didn’t get a top job at an airline.

He was also a difficult man, she says.

“I have a vague memory of a reporter walking up our driveway in Otumoetai Tauranga and my father telling him to bugger off.”

Garden put aviation behind him, never flying again after that epic journey, and went on to become a tomato grower.

“He became this different personality and he never went on holidays, Mum would take us three kids down to Westport every year to have a break from him, to get away from Oscar. He never went anywhere, he went on one air trip in that whole rest of his life, which is what 50 years, which is quite incredible.”