Dr Roger Tyers: The no-fly journey from England to China

When you’re travelling to China to research attitudes to the environment, the climate emergency and personal responsibility, you might feel like a hypocrite jumping on a plane to get there.

Well at least that’s how environmental sociologist at the University of Southampton Dr Roger Tyers felt, so instead he undertook the journey overland by train. 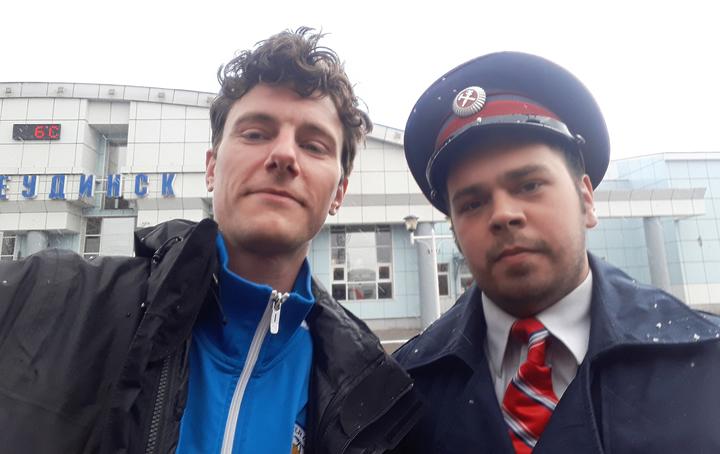 It took Tyers months to plan the trip, but he is part of a world-wide growing movement of people shunning air travel to reduce their carbon footprint. Some campaigners say not flying is as important as reducing plastic and eating less meat.

It took him about 14 days from the south coast of England to get to Beijing; taking ten different trains, passing 100 stops. “I started off taking a photo at each one, but I soon gave up because I couldn’t keep up,” he says.

The journey was a mixture of boredom and fascination. “After a while there’s only so many trees that you can look at, I was reading a lot and watching old TV shows and things like that on my various devices.”

Tyers spent three years of his PHD looking at carbon emissions generated by flying, so it's no wonder this weighed heavily on his mind.

“I wanted to go and practise what I preach, I think that everybody of my social-economic background, people who do fly a lot, we kind of take it for granted, I think that we should all try and fly a bit less and so I thought well, if I can, I’ll avoid flying for this trip instead and do it over land.”

In academia, he says, success is often about how much you travel, the contacts you’ve made and what conferences you’ve been to.

“You don’t always have to travel thousands of miles, often for a conference where you’ll probably talk for about 15-20 minutes to a room of maybe about 50-100 people and then that’s it, you jump on a flight and go home again. It seems a little bit indulgent to do that all of the time.”

Perhaps,understandably, that’s a little harder if you’re in the Pacific.

“I’m just saying those who can do things differently, those who can, should. I’m not expecting everybody in New Zealand spending weeks on boats or anything like that. It’s a case-by-case basis.”

He says it's going to take a cultural change to see a shift in people choosing land travel over flight. Funnily enough, the people who can make change, like politicians, are the people who are frequent flyers, he says. That change includes the tax regimes that favour land-based transport versus flying, he says.

Tyers wanted to show others that there are other options other than jumping online and booking a plane ticket – even if those options take a lot longer to organise.

“There’s many benefits of doing something by the slow route and the various people I’ve met, the various people I’ve seen along the way, it’s utterly different from just getting on a plane, hoping on a tube that disappears in the sky for a few hours and then you’re plonked out and you’re thoroughly jet-lagged and confused and it probably hasn’t been a pleasant experience.”

He only had one unpleasant experience on his journey; at one of the towns he stopped at he was fined for being in the wrong place at a railway station – he was having one of the first cigarettes he’d had in days.

“There was a taxi driver having a cigarette, so I thought OK, I will join him, but I then got stopped by security and brought inside the station by two police officers, very poker-faced, very seriously looking stereotypical Russian public servants and fined the equivalent of about 70 pounds for that cigarette.”

There was a lot about the cultures of the places he travelled through that he just had no idea about before his trip.

“It’s a cliché but the journey can be just as important as the destination, absolutely.”