Rob McCallum: The Kiwi who led the voyage to the deepest part of the ocean 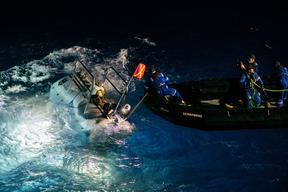 New Zealander Rob McCallum led the team behind American Victor Vesco's record breaking descent to the bottom of the Mariana Trench in the Pacific Ocean. The expedition made headlines not for the technology used to make the journey possible but because plastic was found on the ocean floor. Rob McCallum's no stranger to exotic trips, he's the co-founder of EYOS Expeditions which specialises in guiding intrepid tours to some of the least visited parts of the planet.  He speaks to Paul about his life guiding extreme tours and how he was involved with record breaking dive this week.