Wylie Gustafson: The yodeler who sued Yahoo! and won

Wylie Gustafson is possibly the world’s best known contemporary yodeller in the world, outside of our very own Topp Twins of course.

He’s certainly the most widely-heard yodeller – he’s the man behind the trademark yodel for Yahoo!, all three notes of it. 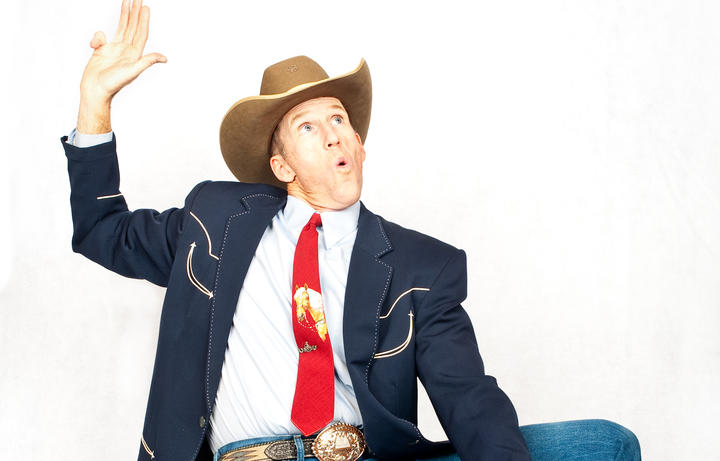 “I always expected to have that three minute and 30 second hit on country radio but it never came. Sometimes life surprises us a little bit, where our successes come from.”

Gustafson lives on his family ranch in Northern Montana where there’s three times as many cattle as there are people – it’s serious yodelling country.

“We have a different yodelling style up here, it’s called the high plains yodel, it’s a very lonesome, ethereal kind of yodel.”

Put simply, yodelling makes him happy, and he describes it as a lost artform. It’s a jump from your regular voice to your falsetto voice.

As Yahoo! was just about to go public in 1996 they too were looking for a yodeller and Gustafson was their man.

Gustafson goes down to the studio and knocks out a few different yodels – it was meant to be a small regional commercial. He’d done a lot of commercials by this time, both region and national. The national commercials worked on a royalty basis, whereas the regional ones were a onetime union payment of about $560 at the time.

A couple of years later he was watching the Super Bowl and heard his yodel during the commercials.

Yahoo! was now a hot commodity, the main email provider with a huge advertising budget.

Gustafson’s yodel was being heard across the world – anytime someone sent an email. It was also being used for Yahoo! branded bottle openers and doorbells among a raft of other things.

“But I hadn’t been paid anything expect the one-time regional fee.”

He wrote letters to the advertising department but never got a response, eventually he lawyered up.

The regional advertising company who first recorded his yodel sent him a cheque for another $560, hoping it would appease him.

“It was almost an insult – but I did cash the cheque.”

Yahoo! entered into negotiations with Gustafson and it was fast becoming national news, Fox News even wanted to fly him out to New York, which worked in his favour, Yahoo! were under pressure to settle.

And that's what they did.

Yahoo! was once worth $125 billion but the figure Gustafson received was a fraction of $5 million, the figure in the lawsuit, he says. “It was enough to change my life as a singing cowboy and yodeller.

“To me, Yahoo had the best audio logo in the world and I could just tell by the amount of attention people not only gave me, but just responded to that little three note yodel, it was instant recognition, it was something that most corporations would die for, to have something like that so ingrained in the heads of their users.”

But, it's always been about the music for Gustafson.

“I never got into the music business to be the next Garth Brookes, I always wanted to do music that I loved, traditional country music, to me the golden era of country music was the 1950s and 60s.”

With more than 20 albums and four decades of performing under his belt, Gustafson has a YouTube video teaching people to yodel. He says yodelling is basically a three-note triad and a voice break.

Finding the smooth voice break is the trick, he says.