Professor Brian Cox: Science of the Universe on stage

A leading physicist says he believes life to be common across the universe and that we could discover it in our lifetime.

Professor Brian Cox has been credited in the UK with rejuvenating interest in physics among school pupils. The entertaining and smart scientist and television presenter is now taking his knowledge on tour with his Universal World Tour. 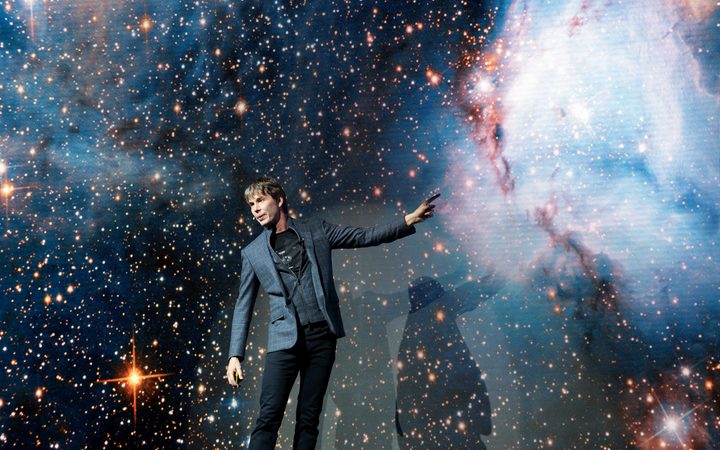 He'll be in New Zealand in June to bring the universe to life in front of audiences. He's using state of the art graphics and images from telescopes and space probes to explain the science behind our existence.

He speaks to Jim about taking people on a journey into a black hole and how he's hoping, now, more than ever to get the point across about trusting scientific knowledge.

He says the show is primarily cosmology based and a big focus is on what the meaning of it all is.

“I think one of the most interesting things, intellectually and emotionally, about cosmology is it does challenge us to think about our place and it challenges us to think about what it means to live these very small lives. There’s no doubt that we’re physically insignificant in this universe, but also - as I go on to argue in the shows - it could be that life, and complex life in particular, is extremely rare and therefore we have an interesting philosophical question; how do we asses our value when we’re physically insignificant and yet perhaps extremely rare at the same time.”

Prof Cox says he fell, accidentally, into public engagement. His background was in research but while he worked on the Large Hadron Collider (LHC) at CERN, he was frequently interviewed by the press.

“I suppose they found out I could talk about what we were doing there,” he says.

“I think one of the reasons the Large Hadron Collider captured people’s imaginations was the sheer audacity of the experiment. To react the conditions that were present less than a billionth of a second after the Big Bang in order to - in some sense - search for something very esoteric, which is the origin of mass at the most fundamental level in the universe. But the scale of the experiment and the number of countries that had to collaborate together to build that experiment I think is - in a sense - there’s an element of that inspiration in experiments like that."

Capturing imaginations was one element of the attention around the LHC, another was the fear it instilled. At one point, Prof Cox took on the role of reassuring the public that the experiment wouldn’t create a black hole.

Part of the work at CERN, he explains, was to examine the theory there are extra dimensions in the universe we cannot perceive.

“One of the consequences of such theories is that there may be an explanation for why gravity is so weak. Essentially it gets diluted because it’s the only force, the fundamental force that probes these extra dimensions. If such theories are true, then it’s possible in particle collisions to get into a regime where gravity’s strong, as strong as the other forces. And then you could produce, in these theories, microscopic black holes. If that’s true, they evaporate away very quickly - they decay like any other standard very massive sub-atomic particle in a sense. Then the trick becomes to spot them, so it would be a tremendous discovery, but they’re tremendously difficult to spot.”

And no, these microscopic black holes did not threaten to swallow up all life on Earth.

He says nature already creates far higher energy collisions than the LHC can muster on its own.

“You could say that if there’s some sort of problem with banging particles together with high energies - that we can’t possible imagine some kind of problem, then that problem would have already occurred and would be occurring all the time, because that experiment is being done, on Earth, all the time by nature rather than by us at the Large Hadron Collider.”

The show uses a computer code which creates a simulation of a black hole based on Einstein’s theory of general relativity for the Christopher Nolan film Interstellar. Cox says by being able to display the simulation, he can help audiences understand the theory.

“That is the framework in which we can begin to approach these deeper questions; questions such as, does the universe have a beginning or is it eternal? What is the universe doing today? How is it expanding? What does it tell us about the past, present and future of our universe?

“All those things are answered within the framework of Einstein’s theory, and black holes are just a beautiful way of describing what an interesting and counter-intuitive and powerful theory that is.”

“The event horizon is the region of space-time where, if you enter there, you can’t get out basically, and you can’t send any signals out. It’s the point of no return around the black hole. But Einstein’s theory is perfectly capable of describing what would happen if you die, if you travel through the event horizon, into the interior of the black hole, there’s no problem there at all, the theory works as far as we know.

“Where it breaks down is at the so-called singularity, you might call it the centre of the black hole. That’s where the theory tells us that its not capable of describing the physical conditions, because it predicts infinities. And this is not what we suspect happens in nature, so what we need is a better theory to describe the singularity itself, and that would be the so-called quantum theory of gravity.”

Cox believes life would be “relatively common” throughout the universe.

“I think that what I’d call the transition from geo-chemistry to bio-chemistry, which certainly happened on this planet, looks to me to be, if not inevitable, then likely given the right geological conditions. And we know those conditions existed on Mars about 4 billion years ago, we know they exist today, most likely on the moon of Jupiter, Europa, possibly even Titan, possibly even Pluto. I wouldn’t be surprised if there were microbes all over the place and with any luck we’ll verify that hypothesis, because we’re looking for them on Mars and elsewhere.

“However, the history of life on Earth tells you that complex life took a long time to emerge on the planet. And you get varied numbers, we don’t quite know but I think that the earliest anybody thinks complex life may have been around is about 1.2 to 1.3 billion years ago.”

He says, on this planet at least, it was probably at least 3 billion years from the emergence of life to complex life.

“That’s a long time. That’s a quarter of the age of the universe. So my guess is, if I had to guess, is that simple life is common but complex life is rare, and civilisations may be rarer still.”

He says if Elon Musk offered him a seat to go to Mars, he wouldn’t take it.

“It’s a very hostile place. It’s the nicest place, beyond Earth, in the Solar System which is why we’ll probably go there, but I think it would be a tremendously difficult life, and I’m not one of those frontier people. I’ll go there when the first hotel is built.”