A Wellington trust is hoping its barista training programme that's been running for three years at Wellington's Arohata women's prison will change lives. The trust aims to smooth the transition from life on the inside to work on the outside.

Trade School Industries has launched a PledgeMe campaign to raise $30,000 towards the cost of a new café in Naenae in the Hutt Valley, where former inmates will work. 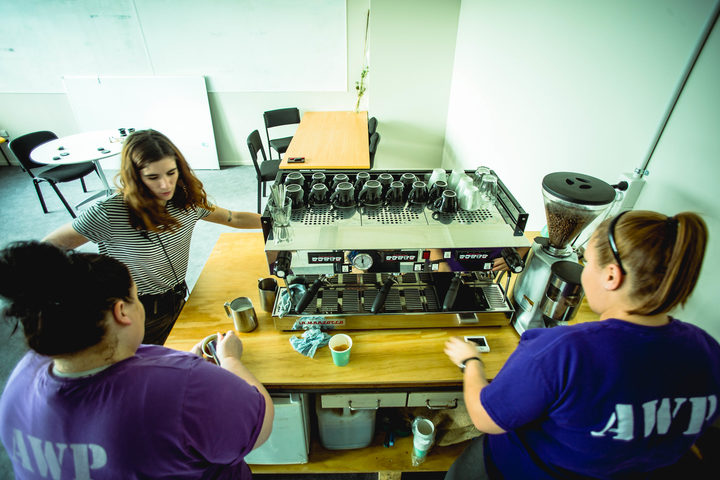 Industrial light fittings hang from the roof above sleek wooden tables, fresh plants sit on the bench against a window next to a stack of magazines.

The Trade School Kitchen plan look much like any other trendy new cafe - the thing setting it apart from the rest is that the baristas will be women with a prison past.

It's a sustainable social enterprise that the Naenae community are right behind.

It's here, behind the wire, that the women will have picked up their barista skills, as part of the Arohata Project.

Trade School Industries train and provide employment to people with a prison past. With 20 women having already graduated from the eight week training in Arohata, it's ready to move into it's next stage - that's where the cafe comes in.

The cafe will hire up to two former prisoners every year. After six months they'll be assessed and have help finding work at another cafe, in education, or at Trade School Industries itself - building leaders from within.

Trade School Industries' training and reintegration manager, Lauren Tennent, launched the project three years ago, after recognising there's a huge need for this kind of thing.

With a degree in criminology and psychology, as well as nine years experience in the hospitality industry, there's no one better for the job.

"A lot of [the women] have said they've never ever had an experience like this in prison, or an opportunity like this, especially for women in prison - I've only worked with women, not the men - they don't get any real opportunities of trade or real skilled training in prison, it mainly is the men who get that.

"A lot of them have been really grateful for the opportunity to learn a skill that they can get employment from outside. A lot of them leave prison without any of that so they really want to make a change," Tennent says.

While there's been a few bumps in the road along the way, the women have really soaked it up - they love it, she says.

"There's always a point in the middle where they maybe believe that they can't do it and they struggle a little bit and it's just about overcoming that and those self-worth issues.

"By the end of it, they're just so stoaked that they have the skill and they're really good at it."

Studies show the skills and preparing prisoners for release has positive effects on reduction in reoffending. For every graduate that doesn't return to prison, the New Zealand taxpayer has saved $100,000.

"Their lives are really important but there's a huge benefit to the New Zealand taxpayer."

The prisoners are stoked and the staff are too - they get a free, freshly-made barista coffee on their breaks, which beats an instant cup of Joe any day.

Tennent would encourage others to use their skill to help out the women too. Digger driving in particular, is something a number of the women are keen to pick up.

While there's often stories about communities voicing their concern about offenders being released into their community, that's just not the case here, she says.

"We're providing them a supportive community, employment and pro-social behaviour and I don't think anyone would be worried about that."

Tennent says they hope to have the cafe doors open at the start of August, but they need help from the public to get there.

So, with new skills under their belt, are the women big coffee drinkers themselves?

Although, she says, "There's definitely a lot of hot chocolate drinkers."