Pasifika poet Selina Tusitala Marsh has an idea to get more boys reading … and perhaps even reading poetry. 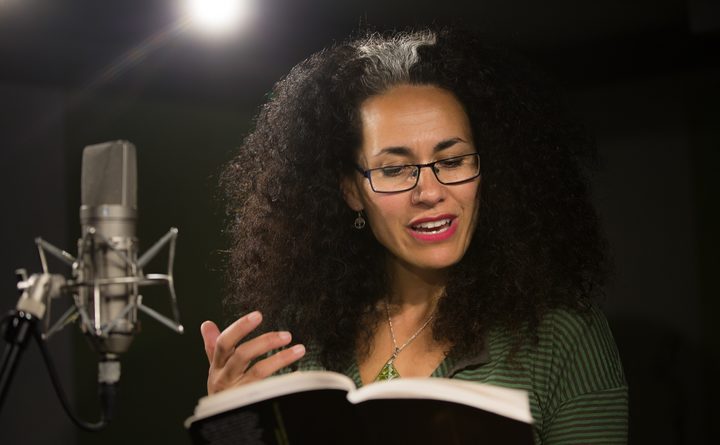 The Auckland poet who was the Commonwealth Poet for 2016, has three teenage league-playing sons who she struggles to get to pick up a book.

That’s a bit tough for the literary star - Dr Marsh was the first person of Pacific descent to graduate with a PhD in English from the University of Auckland, and she now lectures there in creative writing and Māori and Pacific literary studies.

She says a conversation around the dinner table sparked an idea, because even though many poems are short, her sons aren’t interested in reading them.

“My challenge has been to get these boys to read.”

Her poem ‘Warrior Poetry’, which appears in her new collection Tightrope being launched at the University of Auckland this week, is about being at the inaugural NRL Nines and came about through her thinking how to get boys like hers engaged.

“We had sat around the dinner table and I said ‘why don’t you guys read poetry or anything in the house’? And they said ‘oh maybe if Sonny Bill wrote a poem I’d read it’.

“So I thought ‘I’ve got to get All Blacks writing poetry’ and actually I did speak to Graham Henry’s wife about the possibility … I said boys, literacy, poetry, athletes, how might we make this work? I’m happy to run workshops for hallmark athletes and get them writing poems.”

She’s yet to be taken up on the offer but Tusitala Marsh does run workshops in schools. She sits on the board of the NZ Book Council which has a programme, called Writers in Schools.

“We reach 40,000 students. We have 200 writers on our books who go into schools and it’s absolutely remarkable the experience, every single time.”

Tusitala Marsh told Sunday Morning with Wallace Chapman that growing up with a Samoan mother, who initially had little English, was no obstacle to her own reading.

“Mum would take us down to the local Salvation Army and she would give me money and I would get a box and fill it with books. My reading history is very eclectic. Anything and everything … and that was her way of supporting me … she ensured I had pages all around me.”

And her mother, who died six years ago and to whom Tusitala Marsh dedicated her first book, Fast Talking PI, taught herself English in a somewhat innovative way - by watching the TV soap Days of Our Lives and the NZ game show It’s in the Bag. “And she was a very sociable person so she joined the local RSA and picked up English very fast”.

“This is a very familiar story … that Samoan gets spoken around you and one would think you would pick it up by osmosis but unless you are actively engaging with it you kind of just live amongst it but it doesn’t flow through you.

Tusitala Marsh’s Tightrope includes a poem “Explanation of Poetry to my Immigrant Mother”.

Theirs was one of many Pacific Island families who came to New Zealand in the 1950s to 1970s - and education was a key focus.

“Mum was busy keeping the family together and she didn’t really know what was happening in the schools, but she appreciated the books.

“But with my doctoral thesis, when I came home one afternoon she was using it to prop open the front door!  “So she knew the ‘weight’ that education held … literally.

“We grew up with the phrase, ‘you’re a Kiwi bacon family now’.  I remember driving past where the big kiwi was on the bacon factory sign and thinking ‘that’s our family ... somehow it symbolised our family’. As poets are wont to do, you take things literally so I always associated that big plastic kiwi with us.”

She says it’s disappointing not to be able to say she was influenced by any Pacific Island poets.

“I wasn’t exposed to them at school and a past student of mine - I bumped into him and he’s out in South Auckland where the majority was Polynesian and he asked them ‘what Pacific literature do you guys know?’ They knew nothing. They had never heard of Albert Wendt or Sia Figiel ... not even Witi Ihimaera. So something is still very wrong.

“‘Reading brown’ still isn’t core to the curriculum … the students who come into my Pacific literature course at stage two do not know that the Pacific, that Māori, have their own literary canon.”

She says she still draws inspiration from Albert Wendt. “He wrote ‘we are what we remember. The self is a trick of memory. History is the remembered tightrope that stretches across the abyss of all that we have forgotten’.

“That’s timeless, for me that’s what makes good poetry… although it was a piece of prose.”

She says to meet someone like Sam Hunt who lived, spoke and breathed poetry had a big impact on her and she “loves him”.

“Sam Hunt is ‘absolutely Aotearoa’s bard. And keeps on influencing. He should be the next poet laureate … he’s got my vote. But more than that it’s really important to get writers and kids together so writers can blow kids’ minds.

She says Hunt represents exactly what a poet should be.

“There’s two lines in the poem Orange Crayon Stick Figure Man [which is in the book] that say ‘you are what you do and you did what you said’ .

And Tusitala Marsh has advice for anyone getting ideas above their station - it was given to her by author Alice Walker at a writers’ festival event.

She said: “Don’t believe the hype. Once you lose who you really are in any moment whether you are in front of thousands or in front of eight.”

Tusitala Marsh said she took that lesson and later found it to be true.

“The invitation to be the Commonwealth Poet last year came from a moment like that. I was in St Lucia at a conference and I was asked if I would perform my poetry.

“I get to the venue and it is a bustling buffet family restaurant and I get shown the back room and there are eight people sitting there. I was expecting 100-200 people … the people looked tired. It was smoky and loud.

“And I thought ‘you know what it’s not about them or me it’s about the poetry’. And I felt that I gave one of my strongest performances ever.

“In that audience was Professor Geoff Davis who was associated with the University of Vienna and he remembered that performance two years later when he was sitting around the table with the Commonwealth Foundation saying ‘we need a poet from Oceania’ and they asked if anyone had any names … up comes my name. Isn’t that amazing?”

As Commonwealth poet Tusitala Marsh performed in front of the Queen in 2016 but alarmingly developed writer’s block while writing the poem for it.

“It happened because of the very tight parameters around the composition of that poem ... it happened because I lost my voice. I was trying to please and make the story fit into a set agenda… the poem has to be about discovery.

She eventually got there and performed Unity for Her Majesty.

“I had to calm myself down … we had a rehearsal at the Abbey the night before. There were two other performers, one was this UK popstar who I didn’t even know or recognise … my students crack up because I’m like ‘oh what do you do’ and she goes ‘oh I sing’ … so that was Ellie Goulding. I had to Google her.

“I hadn’t been to Westminster Abbey before. … I ended up staying to have a look for about six hours so one of the fathers [priests] had to come up to me about 11.30 at night and say ‘perhaps it’s time to go now’.

“I was sitting in Poet’s Corner and writing poetry… it was quite amazing to be there without all the crowds… who gets the chance.”