'Canopy' Meg and the science of tree tops

Dr Meg Lowman is the world’s first ‘arbonaut’ an expert in the field of forest canopy science.

Nicknamed ‘Canopy Meg’, Dr Lowman is a conservation scientist at the Californian Academy of Science.

She was recently in New Zealand looking at our trees and to give a keynote on the importance of forest resilience and conservation.

Dr Lowman says forests are vital to our well-being and time is running out for the world to start taking trees more seriously. 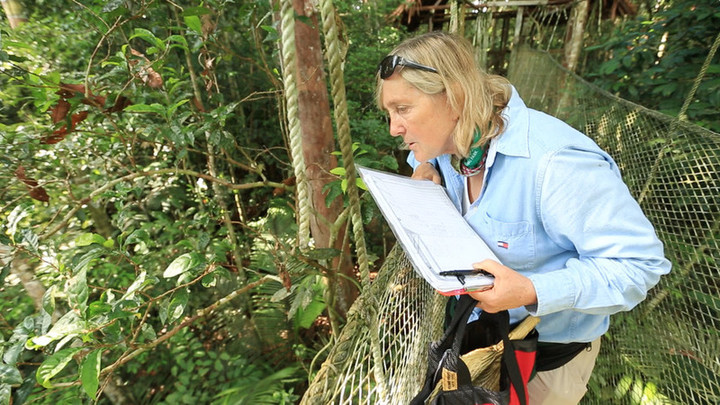 She says the science didn’t really get going until the early 1980s.

“The first canopy walkway was built in Australia in South Queensland in 1985 to try to give people an experience at the top of trees where all the action is.”

Forest canopies remained largely mysterious until this time, she says.

“We discovered scuba in the 1950s, we went to the Moon in the 1960s, but we did not develop the toolkit for studying our very own treetops until the 1980s.”

And what’s the appeal of the tree tops? Dr Lowman says it was almost by accident when studying leaf life in Australia in the 1970s that she came to realise it was a “hot spot” of activity.

She says a canopy scientist is a detective and often what she finds is worrying. There is currently an emergency in California where trees are dying in their millions.

“It hasn’t rained properly for a good five years overall for a few decades rainfall has nbeen less some of these extraordinary tall redwoods and sequoia which drink 600 to 800 litres of water a day are really suffering.”

She was impressed at New Zealand’s mission to be predator free and says similar problems with introduced species bedevil the parts of the US.

“We have 100,000 Burmese pythons in the Everglades and we have a 90 percent reduction of the mammals and the birdlife in that very special national park.”