Kate Holden - In Her Skin

Kate Holden gave a brutally honest account of her time as a prostitute and heroin addict in Melbourne in her 2005 memoir In My Skin. She talks with Wallace Chapman about heroin, sex work and lessons learnt. 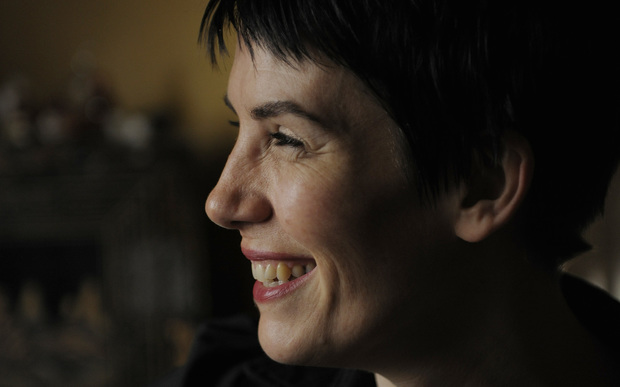 Kate Holden is in New Zealand for the WORD Christchurch writers festival.

On why she wrote In My Skin:

Kate Holden: A lot of people have a curiosity about what happens in sex work and a lot of ideas about what it must be like. Unfortunately a lot of those ideas come to the media in American crime shows and so on. I was interesting in explaining to people how someone like me ended up being a heroin addict because it was absolutely not my life plan. I thought I was going to be working in a governmental department writing education policy or something like that.

Instead I took a swift right turn when I was about 24. [I] went into a sharehouse where my friend lived and held her out my arm and started doing heroin – which took me off on this completely different experience for about five years, right into the underworld. I really felt people might think I was a weak person or a selfish person or a very damaged person – and I knew that I was none of those things. When I started writing my story I guess that was the impulse – to just explain to people why and how and what had happened.

Kate Holden: I was a very typical young woman of the ‘90s. I was a shy one, but I was branching out. It was the grunge era, there was a lot of swagger around. Then heroin came into Australia in a really big way. There was a huge dump of extremely cheap and pure heroin. And I, like literally thousands and thousands of young people at the time, found it come quite close. Suddenly people I knew were trying it. In fact, I didn’t want to try it and I didn’t really have any interest in it – in fact I was more appalled. I first found it when my boyfriend said he’d have some and I was so frightened by what it might do to him that I said I’d have some, too, so I could explain to him that it wasn’t any good. That was the plan. It didn’t really work out that way.

Heroin has this kind of dark radiance about it and so much myth. So many famous people have been involved with it. It was very stagey. We went one at a time into a back room and there was just a lamp with this very strong light. I held my arm out into it and someone injected me, my friend. But it was all very ceremonial and rather silent. I think all of that staginess make it seem really exciting, whereas as if I’d done it in someone’s front bedroom at 10 o’clock on a Tuesday morning it might not have been quite as exciting.

Kate Holden: It seemed like such a great adventure, and there was a gang of us, we were all doing it together. And the more that other people around us seemed a bit worried or even horrified, the more we felt like we were doing something trangsressive. When you’re young you often confuse transgression for maturity. Growing up is all about having to do things which are across a boundary that you haven’t crossed before. I think we were probably daring ourselves to be brave enough to do it… Slowly, slowly, slowly before we realised it, we were just going off the deep end.

Kate Holden: Heroin mixes up the chemistry of your brain so you start having distorted thinking, especially when you’re in withdrawal. It’s not like you’re a normal person deciding sanely that you’re going to keep doing this thing. It actually messes with your chemical make-up.

You start thinking, 'It seems reasonable I should just get $100. So if I have to borrow it from my friend without actually asking her – which is usually called stealing – it’s not really stealing this time because I’m going to pay her back'. But you can’t pay her back so maybe I should lie… So now I’m a lying, stealing person. But that’s not really me. That’s not who I am… At no point do you think that I’m really, really messing this up. You become someone who is constantly trampelling down all the boundaries of good behaviour that you thought you [would never cross] just because there’s a need, a need, a need.

On her start in the sex industry:

Kate Holden: I had a friend who was working on the street and I asked her and her boyfriend if they would take me out. He said ‘Stand here on the side of the road and when a car pulls up, tell them your rates’ and off you go. And that’s what I did. For me it felt like the only good thing I could do because it wouldn’t hurt anyone, I wouldn’t have to steal anymore. I could be basically self-employed and try and make my way in the world as best I could.

On moving from street work to a brothel:

Kate Holden: It was another world. I went from a cold and dark and quite dangerous street to this jewel box of rooms which were all lit up with soft lamp light and lovely painted things and couches and so on. It was very beguiling. It was a huge relief to get off the street, for me. It also meant I went from being someone who was working illegally to someone who was working legally – so that was important.

I found the brothel world to be quite an exceptional workplace. There’s a lot of potential for things to go a bit shonky, but by and large the places I worked were really healthy environments. I met all these other women who were just as varied as any other work cohorts. There were people who were pretty damaged and pretty messed up, but there were a lot of people who were very practical. Almost no-one, I have to say, was on drugs. It wasn’t like the clichés I was expecting. It was quite professional and I was really impressed by that. [Moving from the streets to the brothel] was so important for me because it made me feel less like a freak and more like someone who was practically in the real world, still.

Kate Holden: I have some shocking remorse about the times when I stole and I lied and the distress I caused other people. But I don’t see heroin addiction as an indication I was a bad person or even a weak or selfish person. I think I was a vulnerable person. The sex work, I don’t think that’s something to be ashamed about all. Sex work, I feel quite strongly, is a role which is really important in our communities. I can’t explain to you how good it felt to make lonely people feel better. And sex workers are, by and large, enduring, resilient, compassionate and responsible people.

Kate Holden: There was a feeling that haunted me for several years after. You have a really bad day and something savage comes up inside you and you just want to rip curtains down or slam down a glass of whiskey… something quite violent comes up. And you think ‘That’ll solve my feeling of being all grisly’. My instinct was ‘I’d love to just fix up and jam that needle’ but I was blessed with a series of recurring dreams, which I believe is quite common…

In my dreams I’d suddenly relent and I’d relapse and pick up a needle and have it. And every time I woke up I’d be thinking ‘Oh, my god. I am so glad that’s just a dream’ because I’d experience the horror of ‘What am I going to do now? I’m back on it. This is no good’. So I found that really helped me. My subconscious – bless it – helped me remember what it would be like if I actually ever did relapse. I’ve had a fantastically lovely life since then so I’ve got an awful lot to lose.