New Zealand's oldest political party this month marks its centenary, and a new book by Jim McAloon and Peter Franks tells its story. 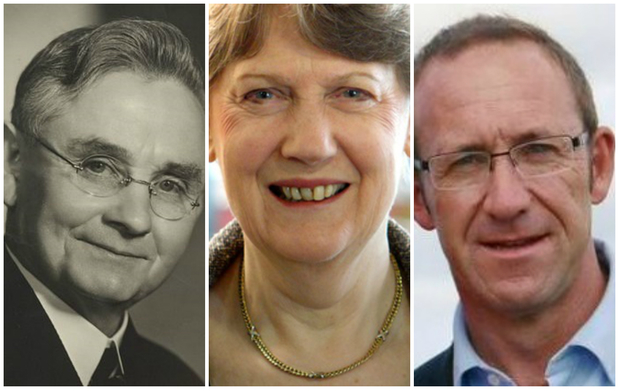 Labour has seen it all in its 100 years - from the innovative Savage government, to the radical Rogernomic policies of the 1980s Lange government that threatened to destroy the party, to the nine-year term of the Clark government.

Mr McAloon, an associate professor in history at Victoria University, has been a member of the Labour party for 25 years. Along with employment mediator Peter Franks, he has chronicled the party's bumpy history in Labour: The New Zealand Labour Party 1916-2016.

The book covers the party from its beginnings in the trade union movement, its rise to power in the 1930s and the reforms of Michael Joseph Savage's government, to the Kirk and Rowling years of the '70s, the upheaval of the Lange government in the '80s, through to long-serving leader Helen Clark in the '90s and into the present day.

Speaking to Wallace Chapman on Sunday Morning, Mr McAloon said the party was born not just among miners in Blackball on the West Coast, but in many other places in the years leading up to 1916.

He said the moves to form a workers' party in the early years of the 20th century came from a feeling that the Liberals wouldn't be able to deliver what working people needed, dissatisfaction with wages and working conditions as well as "a good deal of utopian thinking".

Mr McAloon said Labour grew out of the idea of socialism as Christianity applied - love your neighbour as yourself - but its socialism was more radical than in other parts of the world. 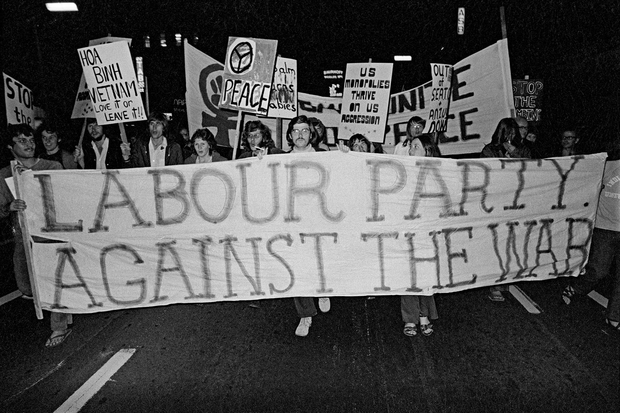 A Labour Party protest against the Vietnam War Photo: supplied

He puts the movement's innovative policies down to the advanced nature of ideas being debated in New Zealand at the time, and the smallness of the country which allowed those ideas to gain currency.

But Mr McAloon stressed that New Zealand was never intellectually isolated and people in the movement were debating Marx, French and German socialists, as well as English ethical socialists, "and I think it just rubbed off on them".

The party's most revered leader, Michael Joseph Savage, led Labour to a resounding victory in 1935, promising to help those brought low by the desperation of the depression years.

The first Labour government introduced one of the first social security systems in the Western world, followed in 1936 by a landslide of legislation aimed at stimulating the economy, including a programme of building state houses.

Subsequent Labour episodes included the "black budget" of Arnold Nordmeyer after which Labour was out of power until Norman Kirk's "progressive humanitarian nationalism" - and internationalism - in his government of the early 1970s. 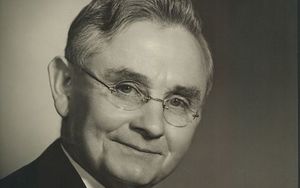 Mr McAloon said David Lange's government projected the Christian humanitarian language which made it possible to see him as "Norm Kirk Mark II".

But significant mistakes were made through the neoliberal excesses of the 1980s, he said. Mr Lange was sold on the idea that the economy was in peril and had to be liberalised. It was at first a pragmatic approach and Mr Lange genuinely believed the economy would be fixed in the first term while the second term would focus on social policy.

But by 1986, Finance Minister Roger Douglas was "getting up a head of steam", Mr McAloon said, with sweeping privatisation that went even further under National in the 1990s.

In that second term, he said, Mr Lange proved unable to control a Cabinet that included neoliberal purists such as Mr Douglas, Richard Prebble, Michael Bassett and David Caygill (although Mr McAloon said out the latter was not in favour of neoliberal approaches to social policy).

It was not until Ms Clark's spectacular rise as leader, from unauspicious beginnings, that Labour was able to win power again in 1999. Mr McAloon said she managed to unify a "very fractured party" and her experience as leader "demonstrates the importance of holding your nerve".

Mr McAloon said the past few years had been very difficult for Labour, and the party led by Andrew Little faced significant social and economic challenges.

But he said a strong social democratic party was a form of politics embedded in Western political systems, and there was still a space for the party in the future.

If it wound up now, what would be the legacy?

"An independent and outward-looking Aotearoa especially in foreign policy and showing that it is possible to balance economic growth with social justice."