Max Cryer on the power of superstition 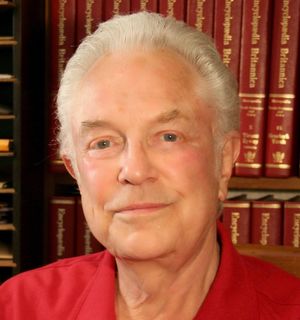 Down the ages, and throughout humanity one thing has been a constant... we have always been superstitious.

Throwing salt over your shoulder, never walking under a ladder, clinking glasses before you have a drink, touch wood… and so many more.

Broadcaster and entertainer Max Cryer has researched the origins of many common superstitions for a new book Superstitions: And why we have them.

Wallace Chapman: I don’t see myself as superstitious in the slightest, but when I say ‘touch wood’ I look for wood.

Max Cryer: Well, it dates back to the time when people believed that trees had a spirit living in them. And if they wanted good luck they would go to a tree and tap it soothingly and say ‘We acknowledge the power of the spirit in that tree’. And that’s many centuries ago. But the idea still sticks in peoples’ minds that if you touch wood you’re touching the tree and you’re asking the spirit to help you get what you want. But the difficulty – as you just found a minute ago – is finding some wood.

When I started on this project I assumed that I wasn’t superstitious and I assumed that most people I knew weren’t because, as you said, this is the 21st century. But the curious thing was that so many superst have quietly morphed their way into people’s lives that they still lurk in extraordinary ways.

WC: What is a superstition, Max?

WC: One thing that I’ll never do, Max, and that is I will never walk under a ladder. I don’t know why, but I will walk around it. And it annoys me.

MC: That’s very common, to be faintly nervous about it. The reason is because it’s a triangle. A ladder leaning against a wall forms a triangle, and the Christian religion has widely spread the image of the Holy Trinity. And the Holy Trinity, of course, is three. So somewhere in the back of your mind you have been taught that. When you see something which represents a triangle you don’t want to break it.

WC: No, what’s going through my mind is there might be a workman up there or a nail might drop or a paint can might drop.

MC: Yes, that’s a very rational explanation. It has nothing to do with why you’re frightened. You’re frightened because it’s a superstition.  But I have good news for you. If you do walk under a ladder and you suddenly realise that you’ve done it, just keep walking. The spell will be broken when you see a dog. I kid you not… Historically, superstition says that you walk under a ladder keep walking until you see a dog.

MC: That’s a big one. Not just some hotels. I think nearly all hotels. That includes restaurants with no 13th table, airlines tend to have row 12A… It dates back to the ancient Norse legend of the 11 gods who met the chief god in Valhalla for a big ceremony. The 12th god Loki wasn’t invited. But he came [making 13 gods at the table] and made an arrow of mistletoe and shot it because he knew that the mistletoe would kill the main god. And it did. So the legend of the 13 grew there, many, many, many thousands of years ago. At a later point, the Christian religion established a vision of Jesus sitting at a party of 13. And that reinforced the original Norwegian legend.