The family of a murdered Honduran human rights activist is calling for an international investigation into her death. 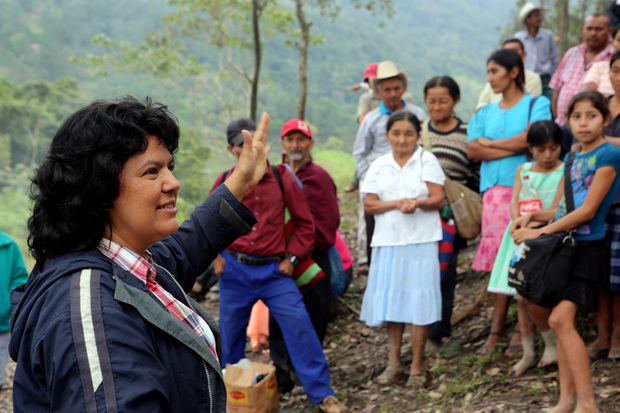 Berta Caceres, a 44-year-old award-winning environmentalist, was killed on 3 March in her home in La Esperanza.

She was shot by gunmen who broke into her house - an attack her family say was a political assassination, not a random murder as painted by the authorities.

Her nephew, documentary filmmaker Silvio Carillo, spoke to Sunday Morning from Washington DC, where he is lobbying politicians to stop supporting the Honduran regime, which he strongly opposes.

"This government is nothing but a criminal syndicate who is enriching themselves and doing nothing for the people of this country."

Mr Carillo said his aunt, who was the head of the National Council of Popular and Indigenous Organisations of Honduras, had been living with constant, serious threats from police, politicians and construction companies, as well as from people she knew.

Her activism, which won her the prestigious international Goldman Environmental Prize in 2015, was seen as a threat to the authorities because the movement had had some success, he said.

"They got the Chinese dam builder - the largest dam builder in the world - to pull out of this [Agua Zarca dam] project but then someone else stepped in."

The prize offered her no protection - despite that being the aim of the award.

"She was becoming a moral leader, as well as someone that was very popular inside and outside the country - she met with the Pope," Mr Carillo said.

"She was well respected - and so that's why they took her down, because she was eventually going to take over and possibly be the next leader of Honduras."

Mr Carillo said the police had tried numerous explanations for the murder, painting her death variously as a robbery, as the result of an internal dispute, a love affair and consistently defaming his aunt since her death.

He said the message of her murder was "don't speak up, don't fight for your rights", and the atmosphere in Honduras was terrifying for his family.

On 8 March, the BBC reported the country's police said they had arrested a man and a minor who belonged to an organisation founded by Ms Caceres and alleged they were responsible for the murder.

"She made the decision to sort of whitewash what had happened, to sweep it all under the rug."

He said the US State Department wanted Mr Zelaya gone because of fears he would destabilise the country and the US would no longer have access to its military assets.

Mrs Clinton detailed her support for the coup in her book Hard Choices.