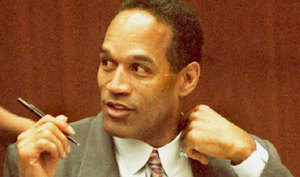 OJ Simpson speaks with attorneys during his double-murder trial in 1995. Photo: AFP

Professor W Joseph Campbell believes 1995 was the year in which history reached a tipping point. It was the year of Monica Lewinsky, O.J. Simpson and the Oklahoma bombing.

It was also the year in which the internet really made its mark.

But what exactly is a watershed year? And why 1995?