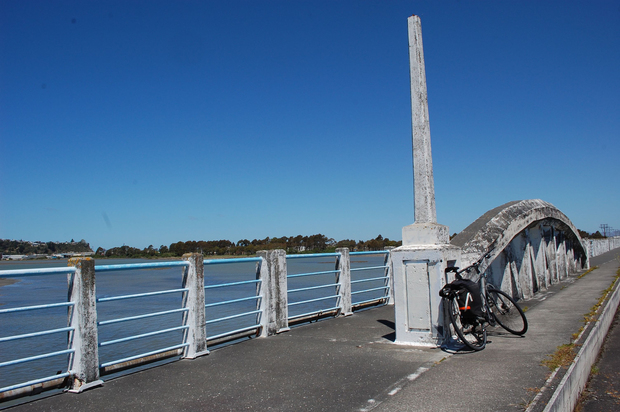 Sunday Morning producer Jeremy Rose takes a look at the cycling economy both here and abroad and visits Hawke’s Bay where cycle tourism is booming.

What's cycling worth? Europe's cycling economy is larger than the economy of Denmark and employs more people than mining and quarrying combined, according to a recent study.

New Zealand studies have come up with similar results. Earlier this year, the University of Auckland's School of Population Health published a paper claiming that every dollar invested in improving Auckland's cycling infrastructure would result in more than $20 in benefits to the community.

Canterbury of University senior lecturer in traffic engineering Glen Koorey says the figures are 'very credible" but yet to be included in the way roading projects are evaluated.

He says the bulk of the economic benefits are in health gains - both for the cyclists themselves and for the wider community as a result of a drop in emissions from cars. "And that's important. We probably kill as many people from emissions deaths as we do from the more obvious road crashes." 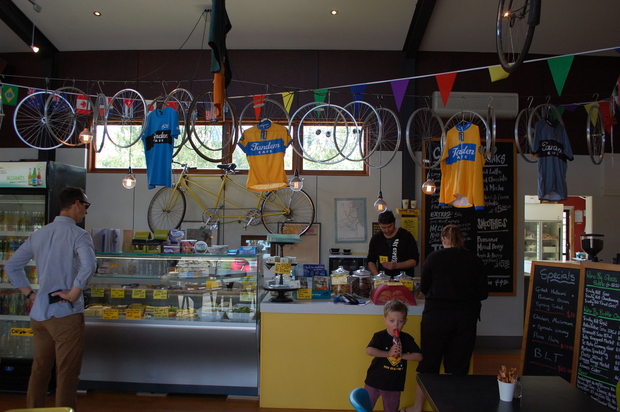 The benefits of the cycling economy aren't limited to gains in public health and cuts in emissions.

European Cyclists' Federation Fiscal and Economic Policy Officer Holger Haubold says cycle tourism is one of the fastest growing parts of Europe's cycle economy and, in part, the growth can be put down to increased investments in the EuroVelo cycle network.

Mr Haubold says if the modal share of people commuting by bicycle doubled in Europe it would result in the creation of 400,000 new jobs.

He says the cycling economy creates three times more jobs than the motoring economy for every million euro of turnover.

Dr Koorey agrees that investment in cycling results in more jobs than in other forms of transport.

"So in terms of the people who are designing, implementing and so forth, you can get a lot more labour for the same amount of dollars involved with cycle ways."

British daily The Times recently published an article that began:

"It's not every cycle path that takes you along Dogs**t River. I kid you not, even if its Maori translation - the Tutaekuri - does sound a little better. Here we are, cycling from Napier in New Zealand, first on beachside paths fringed with Norfolk pines, then turning inland along the banks of the aforementioned river."

Ed Potton - the journalist that penned that piece - rode along the Tutaekuri River on one of Takaro Trails' guided tours.

Takaro Trails owner Jenny Ryan says the article was the type of advertising money can't buy. She set up the business five years ago after going on a cycle tour in the South of France and says the business has been going from strength to strength. 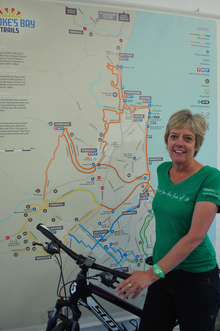 "Something radical changed shortly after I set up my website - which was John Key announcing the New Zealand cycleway project.

"And so here in Hawke's Bay, at the time I first arrived, we had about 60 km of cycle trail which had been built by the Rotary Club in association with the Hastings City Council.

"So we had a start but the balance of our tours were being cycled on country roads. But with the announcement of the New Zealand Cycle Trail and the Hawke's Bay Regional Council coming on board with that we now have 200 kilometres of off road trail."

Brian Fisher, who owns FishBikes, a cycle hire company on Napier's Marine Parade, says the cycle trails are crucial to the viability of his business.

If there's one thing he would like to see changed, to encourage more overseas visitors to come to the region, it would be the introduction of an exemption to the cycle helmet law for people riding on separated cycle tracks.

He says many European visitors react negatively to being told they have to wear a helmet.

And he says the Government could give cycling in Hawke's Bay a huge boost by converting the Napier to Gisborne railway line to a bike trail.

Hastings deputy mayor Cynthia Bowers is also a fan of converting the mothballed railway line into a cycle track. 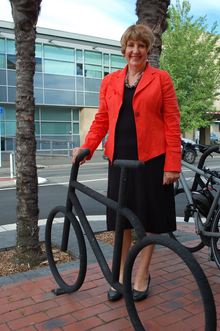 "I think it's a fantastic idea. It would be nice of course to see it reopened as a railway line: that's not likely to happen, it's not viable," she said.

"If you see the economic benefit of the Otago Rail Trail to some of those small towns along the route, it doesn't take a lot to imagine what it might do for the likes of Wairoa."

Many of Hawke's Bay's cycle trails wend their way through the region's vineyards. Black Barn Vineyards manager Francis De Jager, a former professional cyclist, says cyclists make up a growing number of visitors to the winery.

"Recently, we had a group of 50 people from San Francisco. They got married at Black Barn, they spent a week in Hawke's Bay doing activities and cycling was one of them."

Tourism may be a key driver of Hawke's Bay emerging cycling economy but it's not the only one. In 2010, the New Zealand Transport Agency (NZTA) gave Hastings a $4 million grant towards its proposal to become a walking and cycling model community - a project it dubbed iWay.

Ms Bowers says the funding went towards the creation of 120 kilometres of cycleways and creating predominantly off-road linkages between places like Flaxmere and Havelock North into Hastings.

She says one of the aims of the iWay project is to have 20 percent of short trips - trips of less than 5 to 7 kilometres - undertaken by either cycling or walking by 2020.

The rate has more than doubled from 3 to 8 percent but is still well short of the project's 20 percent aim.

The potential economic benefits of reaching that target are likely to be in the tens of millions of dollars if the methodology of the current spate of reports is to be believed. A glimpse of the cycle trail between Havelock North and Haumoana in Hawke's Bay. Photo: RNZ / Jeremy Rose.