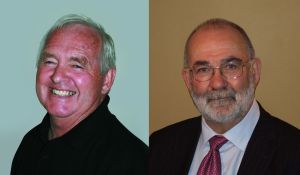 Kim Workman and Garth McVicar are the yin and yang of crime and punishment in New Zealand.

Garth McVicar, a Hawke’s Bay farmer who founded the Sensible Sentencing Trust, is known for his “lock ‘em up and throw away the key” approach to crime; whereas Kim Workman, a former policeman who went on to become the head of the prison service and founded the lobby group Rethinking Crime and Punishment, is known for his unflagging commitment to rehabilitation and restorative justice.

Unsurprisingly both cite their parents as major influences but which one is a fan of psychoanalyst Viktor Frankl and which one cites Steve Jobs as an inspiration?

Garth McVicar (left) and Kim Workman (right) join Wallace Chapman to reflect on the individuals, books and events that have shaped them.