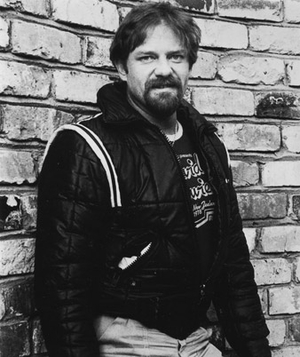 Barry Jenkin is a music aficionado who built a reputation as one of the most influential people in NZ music, and is credited with bringing punk and new wave music to New Zealand through his access to video clips and to import records from overseas – many of which were not available in New Zealand during the 70s and 80s. Most important though was is his taste for new and fringe music. He remembers it as an exciting time in music. “Hell yes, that’s why I did it, it was too damned exciting to ignore.”

After starting his radio career as a presenter on 2YC (now RNZ Concert), Jenkin moved to Palmerston North’s community station 2ZA, and then in 1972 he began DJing during the evenings on 1ZM in Auckland. A few years later he moved to the evening shift on Radio Hauraki, where he was christened ‘Dr Rock’.

A chap in the newsroom recommended Barry Jenkin as a possible host of Radio with Pictures – a television show featuring the music videos which were not considered acceptable during daylight hours. Jenkin’s musical nouse impressed the producers, and in 1977 Barry overcame his nervousness (and avoided the "idiot cards" i.e. autocue) to front up as the first ‘RWP’ host. This was three years before the advent of MTV in the USA.

Jenkin says he had a lot of say over which videos were broadcast, as well as which would appear on Radio with Pictures, versus which went onto the more populist Saturday afternoon programme Ready To Roll. He had an epiphany in 1977 when he heard acts such as the Stranglers, Boomtown Rats, the Sex Pistols, Ramones and Television. Overnight his taste – and what he wanted to broadcast - changed from 70s rock to ‘alternative’ – punk and new wave all the way.

The change in style was challenging for the organisations employing him. He was dropped from Radio With Pictures in 1980, which moved to Wellington with new hosts including Phil O'Brien, Karyn Hay, and Dick Driver. Karen Hay invited Barry back to choose some NZ songs in 1984, which you can watch on NZ on Screen:

Barry Jenkin left Hauraki in 1981 to return to 1ZM and begin the legendary midnight-to-dawn ZM All-Nighter, which was networked across New Zealand. Many a young kiwi spent their nights hiding a transistor radio tuned in to Barry’s show under their pillow, and having their ears and brains expanded by the music he played. There followed two golden years in New Zealand radio history until Jenkin was let go for falling asleep on-air after having a bit too much fun one evening.

Jenkin’s voice continues to be heard from time to time on radio and television, in news reading, adverts and documentary narration, and he continues to be held in high regard by the people who's musical taste and exploration he influenced over the years.